How to create a county health department during a pandemic 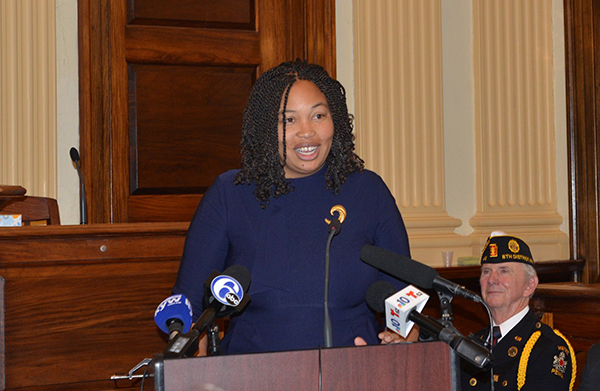 When the COVID-19 outbreak began to spread in March, county residents in Delaware County, Pa. were met with surprise when they realized their county health department was nonexistent.

Council Vice Chair Monica Taylor described how groups within the county have pushed to form a health department in the past, but the political will to move forward never existed.

Taylor was elected to the council in January 2020 and ran on the fact that the county needed its own public health department, a similar platform to her running mates.

“If we’re really looking at social determinants of health, a health department is an amazing way to help with health disparities within the community and there are quite a bit of those in Delaware County,” she said.

Neighboring counties rank in the top 10 in health outcomes for the state, a drastic difference compared to Delaware County’s continually decreasing ranking in the 40s, Taylor said.

The county council hit the ground running in January meeting with neighboring leaders, heads of other county health departments and the state to talk about implementing a health department.

“We just kind of started our timeline and kept trudging on and then of course we had a pandemic, but we continue to keep rolling,” she said.

The pandemic did not derail the county’s plans to create a health department.

“We knew how important it was and with the pandemic, that even exacerbated so many issues,” Taylor said.

Throughout the pandemic, the county relied heavily on support from the state and formed an intergovernmental agency agreement with neighboring Chester County, which oversaw all COVID-19 response.

“That has helped us significantly,” she said of the Chester County partnership.

The southeast region of Pennsylvania has also collaborated throughout the pandemic by holding frequent calls to discuss COVID-19 strategies.

“It’s really been a great support system and it’s also nice because we’re able to talk out different issues that we’re having,” she said.

However, the collaboration and the neighborly help still left Delaware County with challenges.

Taylor said the county would have been able to better target resources with a public health department in the beginning of the pandemic when cases began to spread. The state’s data provided the county with numbers of positive cases, but not exact locations of where cases were reported.

“We would have been able to better target our response in the beginning,” she said.

A health department also would have helped better understand health disparities throughout the county to target which communities may be harder hit by the virus, she said.

“We were very reactionary in the beginning and I think that having a health department would have helped us better plan out our line of attack against the virus,” Taylor said.

Despite the pandemic, the county is still on track to form a public health department and formed a steering committee that’s currently working on a strategic plan that will be done by December. The committee is completing an economic impact study to provide the state with necessary information to form a department.

Johns Hopkins University also completed a needs analysis of the county to show health areas that need to be addressed.

“One of the other parts is data to monitor and evaluate the health of all Delaware County residents and that is something that directly falls underneath a health department,” Taylor said. “That way, we can actually put resources where they need to go whereas now, we don’t have that information to provide and we can’t target our response.”

She said the council will be able to approve moving forward and establish a board of health to start to build out the department before going to the state for approval in the fall of 2021.

“I would say that forming a public health department is going to help to provide a more coordinated health response in general for our community,” Taylor said.