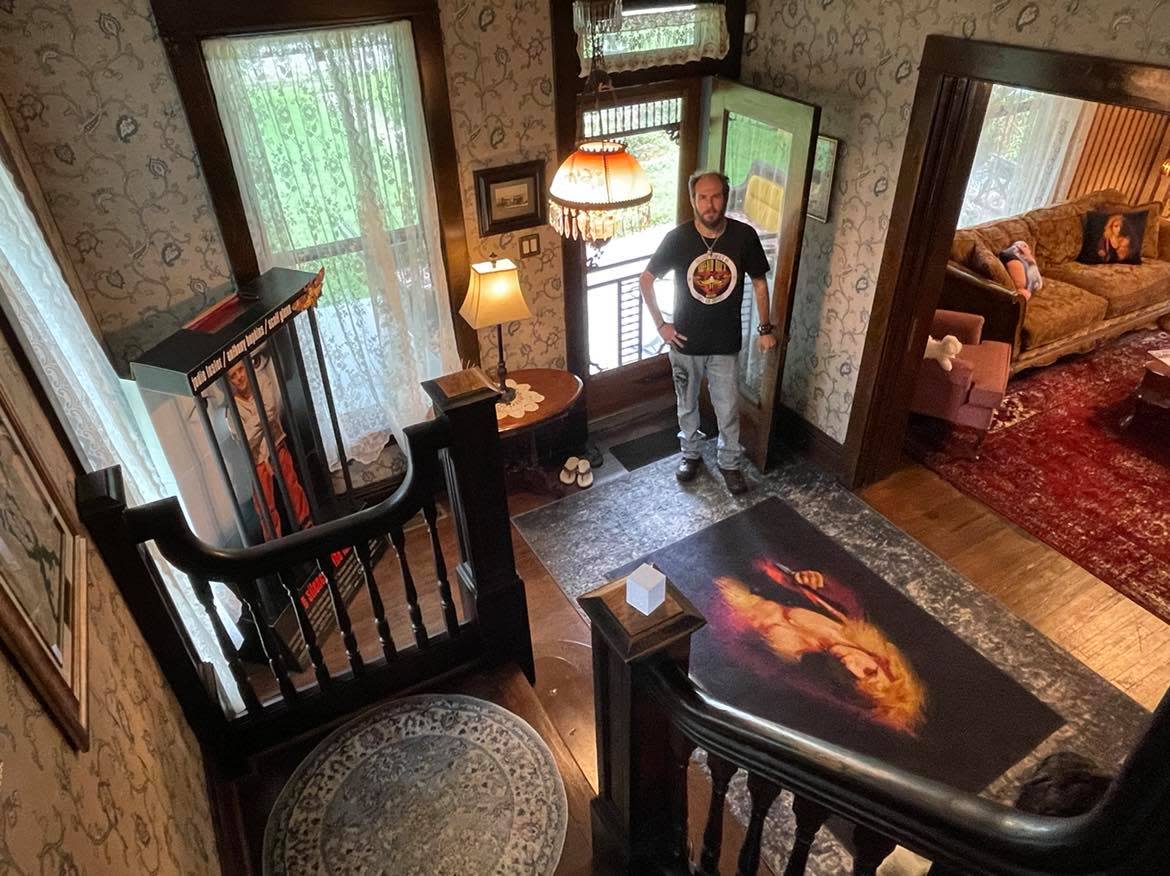 Chris Rowan stands in the foyer of his Fayette County, Pa. home, which was used while filming the 1991 film "The Silence of the Lambs."

Many iconic horror movies are filmed in rural areas — there’s a whole sub-genre dedicated to it, “folk horror” — and because the plot often revolves around the setting itself, die-hard fans travel all over the place to see the location of their favorite cult classics and slasher franchises, leading to economic benefits and tourism boosts for the counties when the cameras are rolling and long after the film crews have departed.

“Horror movies in particular have quite a following — it’s a very emotional thing,” said Tim Clark, film commissioner of the Buffalo Niagara Film Office in Erie County, N.Y. “As Halloween approaches, I think the interest gets even more piqued, because this is that time of year when the leaves are changing and the nights are a little bit cooler and you expect to see somebody popping out of the bushes scaring you and so, I think people, especially in this season, are looking for that kind of experience and they live almost vicariously through visiting these horror sites.”

Clark’s job is to scout locations for movie production companies that are looking to film in Western New York, one of which was an Amish farm in Allegany County, N.Y. for Paramount Pictures’ “Paranormal Activity: Next of Kin.” He said the film office often receives calls from fans asking for the exact locations of scenes from different films the film office has scouted so they can visit them. Studies have shown that while horror movies set in rural areas sell more tickets than those set in urban locations, fans of horror movies are more likely to live in a city.

“I think the isolation of being in the country or in the wilderness or in a less frequented area just adds to the suspense,” Clark said. “A lot of the horror movies that are shot in this region are based in the woods and it usually involves a chase or a sudden surprise or some creature or deranged person. It just lends itself very nicely, [whereas] in the city, there’s density, you have people and that kind of thing that can interrupt the surprise.”

Clark said that production companies bring a substantial amount of money to their filming locations during shooting through lodging, restaurants and more.

“Paramount Pictures in particular — we’ve worked with them multiple times –– and they very much want to give back to the community, so it’s very important for them to spend money in those towns –– to not just bring some caterer in from Hollywood or bring all the lumber in from some giant warehouse in, I don’t know, Rochester or something,” Clark said. “They want to stay and spend money in the nearest towns, particularly in the town that they’re in.”

“And the money that they leave behind — it sounds crazy, and I used to be skeptical of these figures — but until you actually see the kinds of things they buy and the sort of money they leave behind, you don’t realize, but it’s thousands, tens of thousands of dollars.”

In addition to bringing in money during filming, horror films — particularly ones with a huge fanbase –– have a lasting impact on the tourism in counties where they’ve filmed.

The film “Friday the 13th” was filmed in Warren County, N.J., and even more than 40 years after its theatrical release, the movie still attracts fans from all over to Camp Crystal Lake, where for the majority of the year, there are tours of the grounds with props and memrabilia. Blairstown Diner, which makes a brief appearance in the film, also is a big draw for fans and cast and crew members occasionally come back for anniversaries on Fridays that fall on the 13th.

Another movie that has proven staying power among its fanbase? “Silence of the Lambs.” More than 30 years after it was released, horror movie fanatic Chris Rowan purchased character Buffalo Bills’ home pictured in the movie, located in Fayette County, Pa., and opened it up to the public this year for tours, even creating a replica of an iconic well in the film, with the help of people who actually worked on the movie.

“[Rowan’s] a huge fan of the horror genre, and he loves to go to horror filming locations, so if he’s on vacation, he looks to see what kind of films were shot in that area and tries to go and see where they were,” said Eric Knopsnyder, director of public relations and community outreach for GO Laurel Highlands, which promotes tourism for Fayette, Somerset and Westmoreland counties. “… He’s really excited about that aspect of it and goes to conventions and things like that, and he really enjoys being a part of that audience. And this allowed him to extend that where he’s not only a part of the audience, but can bring in the audience now too.”

Knopsnyder said that visitors from 23 states and five counties have toured the home since it opened over Labor Day weekend.

“I think obviously you can see from the horror genre and the market that it has, the attraction that it has to people,” Knopsnyder said, “and especially when you’re talking about a movie with the legacy of ‘Silence of the Lambs,’ where it won five Academy Awards and is pretty much the gold standard in terms of scary movies, that people want to be able to experience something like that and see where some of their favorite scenes were shot and just experience what that location is like.”