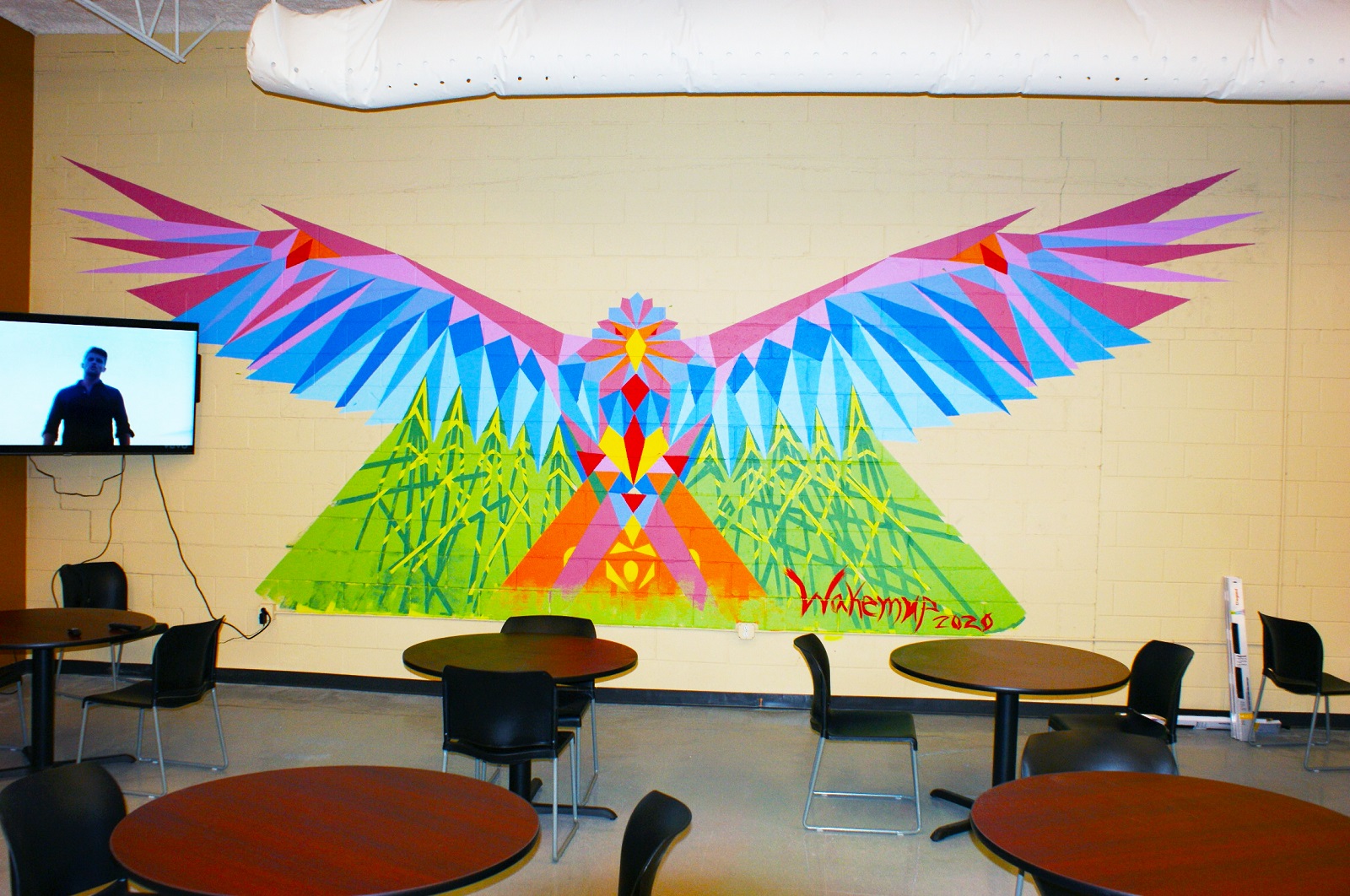 An original Native American mural highlights one of the rooms at Homeword Bound, a shelter partly funded by Hennepin County. Photo courtesy of Michael A. Goze/AICDC

Around 1 percent of Hennepin County, Minn.’s population is Native American, of which between 12 and 14 percent are experiencing homelessness.

“Our numbers in terms of disparities in homelessness are pretty shocking,” said David Hewitt, Hennepin County’s director of housing stability.

More than $9 million, about 40 percent of the total amount of the American Rescue Plan Act funds the county received, went toward housing and homelessness measures, according to Hewitt, some of which went toward helping fund Homeward Bound, a 24/7 Native American emergency shelter created by the American Indian Community Development Corporation (AICDC) that offers physical and mental health support services.

“The goal is to put them into either supportive housing or permanent housing that’s appropriate for the stage of life that they’re in,” said Michael A. Goze, CEO of AICDC. “We believe in a full continuum of care, but we also don’t believe that people all want to be with us either and so a lot of our referrals are to other organizations or other housing options that are appropriate for the clients we serve.

“I’m very proud of the fact that we’ve been cited by Hennepin County as working with some of the most long-term homeless people in finally getting them into permanent supportive housing or Section 8 housing.”

Homeward Bound opened in December 2020, receiving funds from Hennepin County for acquisition and renovation of the building in making it suitable to hold 50 people, according to Goze. The first two years of the shelter’s operations were funded by the county, city and state and 2023 will be entirely funded by the county, he said.

As for the name “Homeward Bound,” Goze said it embodies the AICDC’s vision for the shelter.

“The goal was, it was not a last place [to go], it was meant to be the start of getting to a home,” Goze said. “So, the goal is always to get people in the appropriate housing that serves them the best — that provides them a level of affordability, a level of safety.”

Helping create a shelter for and run by Native Americans was one of the numerous recommendations presented to the county’s board of commissioners in 2019, along with adding more case management and increasing operating hours at existing shelters.

“Hennepin County –– like communities all around the country –– has been struggling with an affordable housing crisis for a very long time,” Hewitt said. “We have an estimated 74,000 households in our community that earn less than 30 percent of the area median income, and we have an estimated 14,000 units of housing that are subsidized to be affordable to people in that lowest income group. So, if you’re looking at those two numbers alongside each other, what you see is we have 60,000 more households in this lowest income bracket than we have housing that is subsidized to be affordable to them.”

Through the county’s supportive housing strategy, its shelter budget increased by $1 million to implement in 2020.

“Then the pandemic hit,” Hewitt said. “I’ve been reminded a few times by the Mike Tyson phrase about how everyone has a strategy until they get punched in the face, and obviously it felt a little bit like that when we were gearing up to do what we thought were really exciting pieces of work that would help address some of these growing issues of unsheltered homelessness, and then this huge pandemic hit — we had to pivot completely.”

The COVID-19 pandemic showed there is a need for more specialized answers to address the county’s population experiencing homelessness; for example, the county noticed that family homelessness was going down, but instances of individual homelessness were increasing, Hewitt said.

“What we talk about often is we need to increase the quantity, quality and variety, and I think that’s true in both shelter programming and deeply affordable and supportive housing programming, because we know that one size doesn’t fit all,” Hewitt said. “… We see a really disproportionate impact and intersection of these issues, particularly impacting our Native American community. Homelessness disproportionately impacts our Black residents as well, but the Native American community really is at this intersection of unsheltered homelessness, the opioid epidemic and then the pandemic.”

All of Homeward Bound’s staff is Native American, which Goze said he considers to be one of the most important elements of the shelter.

“A lot of the [staff] have had life experience similar to the residents — the guests — that come to Homeward Bound shelter,” Goze said. “Because our community is so small, there are a lot of instances where there are actually relatives helping relatives, and that seems to provide a level of strength.”

David Goodman, Homeward Bound’s manager, said his past struggles with alcoholism give him a unique perspective that allows him to help the shelter’s population who have substance use disorder.

“Prior to going into social service work, I was an electrical lineman, climbing telephone poles and doing construction work, and I lost that due to my drinking,” Goodman said. “I believe some of it was due to the trauma of being Native American, so when I sobered up — I’ve been sober going on 30 years now — but what I’ve been through, what I’ve seen, [it’s] just trying to give back.

“They don’t want to hear anything from nobody that hasn’t been there … so, the experience here for myself with that piece, it goes a long way, because they know I’ve been there.”

Around 2016, Goze said he conducted a survey of 200 Native Americans experiencing homelessness. Eighty-six percent reported that they had only used a shelter once in their life and 89 percent said they would never go back to one.

“They said they didn’t feel welcomed, there was no staff that looked like them, safety was a concern and the losing of property was a major concern,” Goze said. “People waking up with someone else’s hand in their pocket, stealing their money or going to sleep with shoes on next to their cot on the floor, only to have it gone the next morning. And so, those were some of the really concerning pieces that led to people not willing to spend the night in a shelter and looking for alternative places.”

Hennepin County Native Americans had sought out shelter at a large tent encampment known as “The Wall of Forgotten Natives.” It was located close to where Homeward Bound is now but was shut down in December 2018 when city workers cleared the camp out, covering the ground with metal pipes and putting up a chain link fence to keep people from setting up a new camp.

Goodman echoed the sentiment of general mistrust in shelters, but said that he’s found Homeward Bound’s residents to feel more at home because of its Native American staff and the sacred practices made available to those at the shelter, including smudging, which is a ritual that spiritually cleanses a space, as well as sweats, which Goodman coordinates with spiritual leader Fred Desjarlait and is used as a ceremony to heal, give thanks and purify the mind, body and soul.

“There’s a lot of mistrust from other shelters that they’re in, but coming here, with it being a cultural thing, they trust us more,” Goodman said. “I would say just the atmosphere. I’m a very cultural person myself — I’m a traditional dancer, and most of my staff are traditional dancers and singers. One of the nationwide singers for The Boyz, he’s a lead singer for the [Native American] drum group and he’s one of my lead workers here during the day.”

Along with providing Hennepin County Native Americans who are experiencing homelessness with a place to stay and providing services involving mental health, substance use disorder and finding permanent housing, AICDC is focused on destigmatizing homelessness, Goze said.

“There are a lot of reasons why an individual or a family become homeless — sometimes it’s unavoidable and sometimes it’s with cause, but at the same time, we have to look past that and move to the next step and look at how we can help people,” Goze said. “AICDC looks at the lives and livelihoods of the people we serve, and by keeping that in our focus, we feel centered.”