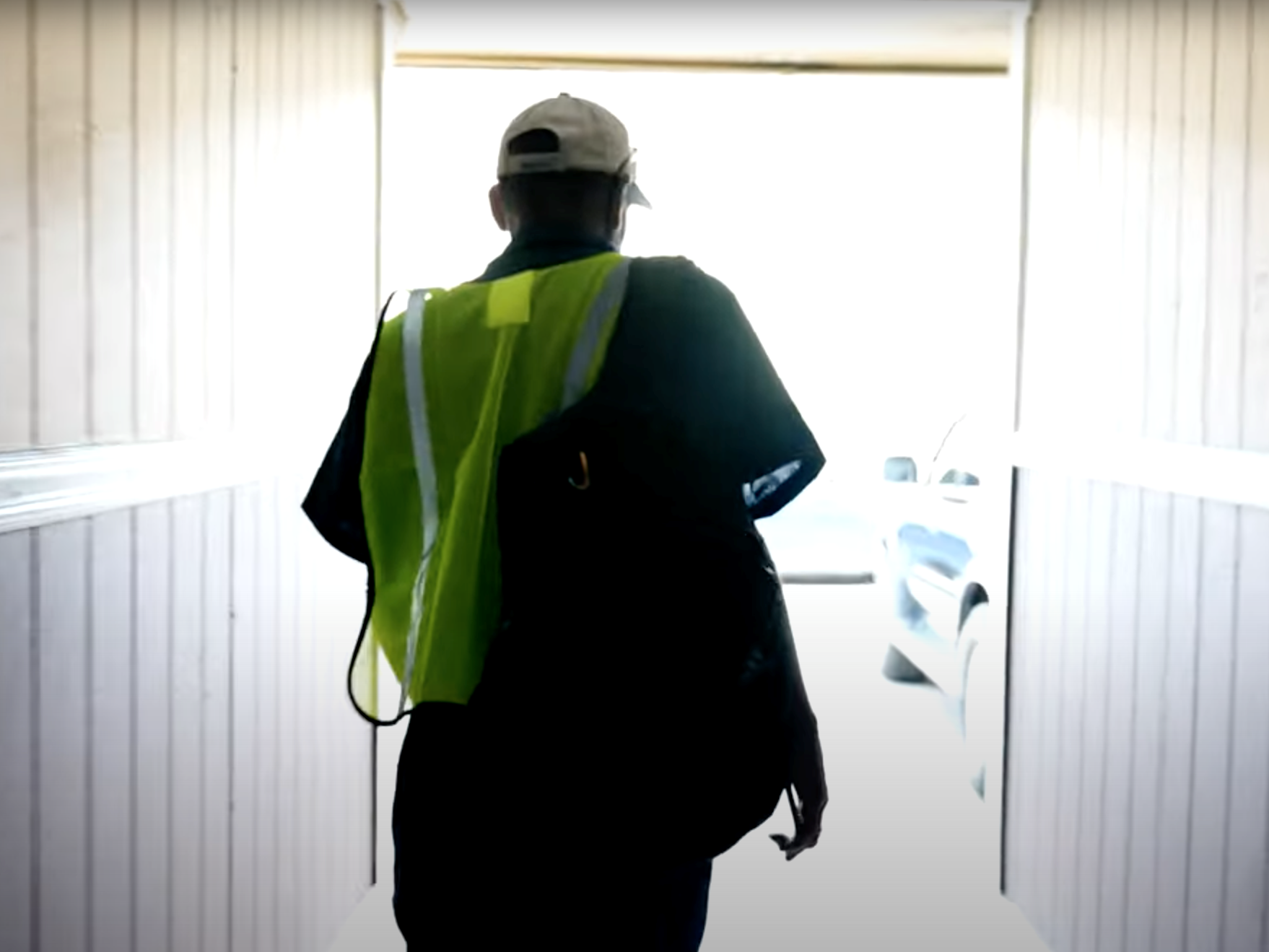 Jazarus Williams had been sleeping under a bridge for about three years when he joined Employ2Empower, a Harris County, Texas program that pays those experiencing homelessness $15 an hour in exchange for services like graffiti abatement and restriping parking lots, as well as time devoted applying to housing, healthcare and permanent employment.

“When I first got into the program, I was still sleeping on the streets, I was drinking, I was using drugs, I was suicidal,” Williams said. “Without this program, I don’t know where I’d be right now to be honest.”

Employ2Empower functions through three stakeholders — the sheriff’s office and the non-profit organization Career and Recovery Resources, Inc. run the program and county commissioners secure funding for it.

The sheriff’s office provides the participants with job mentorship, as the deputies involved with the program are chosen partially for their range of skills outside of law enforcement, like plumbing, carpentry and the ability to troubleshoot equipment, according to Sgt. Theodore Perez, while the county’s Career and Recovery Resources provides participants with referrals to supporting services.

Williams joined in September 2022 after hearing about the program through Perez and Career and Recovery Resources case manager Belinda Flores, who were looking for new participants at The Beacon, a non-profit organization serving Houston’s homeless population, where Williams would wash his clothes, shower and eat, he said.

Since then, Williams said that he has stopped using drugs and his mental health has drastically improved. Employ2Empower helped him with transportation to doctor’s appointments, provided him with clothing and got him temporary housing. He is now in the process of getting into permanent housing and receiving his GED, he said.

“I’ve been basically homeless my whole life … I had a real rough childhood growing up and I always just prayed that somebody would come in my life, because even my own family pushed me away — now I don’t have nobody but this place,” Williams said. “And I still need them now, so I feel like this can be something that can change the whole world for real — it’s been a great help for me.”

Employ2Empower started off as a six-month pilot program in Precinct 2 funded through Commissioner Adrian Garcia’s budget and expanded county-wide in July 2022 after the Harris County Commissioner’s Court unanimously voted to devote $2.1 million in American Rescue Plan Act funding toward the program.

Garcia’s experience as a police officer and Harris County sheriff shaped his perspective and priorities as a county commissioner, he said, particularly in understanding how important it is to treat those experiencing homelessness with dignity.

“It was being a street cop where I saw where government fails and where government can do better to have a better impact on the communities that I was patroling, so that street experience has just been so invaluable for the way I look at programs and policies and implementation of them in our community,” Garcia said.

When Garcia was elected to represent Precinct 2 in 2019, he said that he immediately started receiving complaints of the county’s homeless population under freeways, at street intersections, along the side of roads and at encampments.

“People were just adamant about getting them arrested, ‘Get the sheriff’s office out there and make them go away,’” he said.

Garcia said he knew that arresting those experiencing homelessness wasn’t the answer and had the idea to repurpose an initiative he put together while on Houston City Council, District H Cares, which provided food and a recommendation letter in exchange for doing tasks like cleaning out weeded lots, picking up trash and cleaning out drainage culverts.

This time around though, Garcia had the budget to compensate participants for not only their work, but also for time spent on applying and getting assessed for housing, healthcare and permanent employment through Career and Recovery Resources, which provides participants with digital literacy and life skills training.

“I’m very grateful for Career and Recovery’s work because they’re just magicians at being able to work with fragile individuals — they treat them with dignity and respect, they know how to engage them,’” Garcia said. “They know what it takes to make a success story take place, but they also know that we can’t expect someone who’s been homeless for a period of time to all of a sudden be able to show up at eight o’clock in the morning and be ready to work.

“And if they have been dealing with substance or alcohol abuse, you can’t expect someone to become sober on day one, so we know it’s a process and that’s why having law enforcement and social workers working closely together with peer mentors — that is the perfect recipe.”

Recruitment for the program comes from numerous sources, but one of the primary ways is through peer mentors. Employ2Empower enlists the help of those who have personally benefited from the program to spread the word, Garcia said.

“We ask them to help us by going back into the encampments they’re familiar with or the encampments they’ve identified — no one can speak the language better than someone who’s been there,” Garcia said. “The other part is through the sheriff’s office homeless outreach team — these are a group of specially trained deputies, and so when they get calls or complaints from the community about homelessness in a particular area, these deputies are dispatched, they engage them, then they’ll make a call to Career Recovery and then they start the process of engaging and trying to get them into the Employ2Empower program.

“Not everyone jumps at the opportunity, obviously, and not everybody is a success story on day one.”

Employ2Empower is what Garcia calls a “low barrier employment program,” so participants can work on and off with the program and you’re not “out” if you don’t show up for a period of time.

“We know that people have been out of touch with work discipline, so we don’t expect miracles on day one,” he said.

While Texas’ minimum wage is $7.25, all Harris County employees make $15, as the basic living wage in Houston has been identified as $14.33, and it was important that standard was held to Employ2Empower, Garcia said.

“When I came in as county commissioner, not all county employees were working at a livable wage, so we made a county policy that all employees would start at at least a livable wage, and then we made sure that our contracts reflect that as well, and then just recognizing, ‘Hey, if we want to end homelessness and we talk about [how] a livable wage is what keeps people out of poverty, let’s apply it to Employ2Empower.’”

The ARPA dollars cover participant wages, programming, administrative fees and salaries for case managers from Career and Recovery Resources and deputies from the sheriff’s office in the expansion. The county’s four precincts are at varying levels of implementation, according to Scott Spiegel, Garcia’s senior press secretary.

“We do need a little bit of a push from the individual precincts to keep this thing going to support the sheriff, to support Career and Recovery on their own end, because there’s still things like vehicles and tools that are needed –– the paint doesn’t just appear out of thin air to paint new roads and whatnot,” Spiegel said. “We’re pretty confident that over the course of this next year it’ll be more like a well-oiled machine across the county.”

The pilot program served 79 participants––36 of whom received additional employment support and 47 of whom were assessed for housing––including Williams. The program currently has 42 participants, according to Career and Recovery Services data.

While Garcia recognizes there’s not a one-size-fits all approach to tackling homelessness, he’s proud of the program’s success, he said.

“I’m not naive enough to think that we can end homelessness, but I do believe that this is by far the most effective way to deal with it,” Garcia said. “If we can get an individual into permanent supportive housing and then if we can get that to be self-sustaining by their willingness to work, that’s a great thing … We pay them for their work and for their time, so that we can continue to support and help them continue to move forward.”