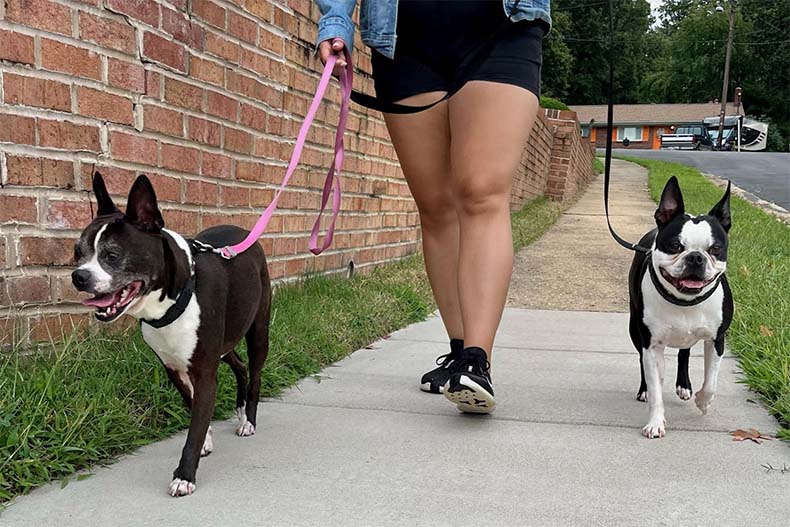 Pets are taken care of while their owners are in treatment for mental health or substance use issues.

Some clients were declining substance use or mental health treatments because they needed someone to care for their pets. That’s when the new component was added: A foster pet program.

A survey conducted by the mental health center found that more than 70 percent of county mental health staff members had at least one client decline treatment in the past six months because they didn’t have temporary care for their pet, according to Tim DeWeese, director of the center.

“If you have to choose between doing something for yourself, and then not taking care of those you love — oftentimes, we sacrifice our own needs, and pets are certainly a piece of that puzzle,” said Michelle Burchyett, a clinician at the center. “So, we find that individuals will not seek the treatment that they need if they don’t have an alternate source of support for their pets — that’s just a reality that we see over and over again — and as those individuals maybe don’t get the care that they need, oftentimes, things get worse.”

Burchyett referenced a situation the center had where a patient experienced a mental health crisis, and it wasn’t until after the person was hospitalized that the center was made aware of the client’s pet that was left alone at home.

“The hope is that if they need to get hospitalization or if they need some sort of residential treatment, we can offer that support and service before things reach a crisis point for them or for their pets,” Burchyett said.

BestyBnB was originally created to help survivors of domestic violence. Self-proclaimed pet lovers Andy Bond and Matt Krentz, friends who both work in the software industry, got the idea for the platform after hearing an interview on Kansas City NPR-affiliate station KCUR-FM with a representative from a local domestic violence agency.

“They were talking about some of the challenges they face in trying to provide services to survivors, and this person mentioned that the biggest crisis that they face is over 50 percent of the time, when a person calls their hotline wanting to make that next step to get to safety, when they find out they can’t bring their pet, they hang up and don’t come,” Bond said.

“Matt said, ‘I think if we tried to help in that area through technology, rather than how a lot of people were trying to solve it at the time, just through brick-and-mortar type of solutions, we might be able to further enable these domestic violence agencies to serve these folks.’

“I agreed and that afternoon we storyboarded out how we would envision the platform working.”

In what Bond calls “serendipity,” it was through the radio station that mental health center employee Matt Clark heard about BestyBnB’s launch. Bond and Krentz discussed it during an interview on the station, for Domestic Violence Awareness Month. Clark reached out about adapting the platform to address mental health for Johnson County.

The mental health center is primarily funded through the county, but the partnership with BestyBnB was made possible through funding granted by the local nonprofit Friends of Johnson County Mental Health Center.

That funding helped purchase the software and cover the costs associated with taking in pets. While most of the pet sitters work as volunteers, there are expenses like food to be factored in, DeWeese said.

The process for becoming a caregiver includes providing at minimum three references and going through a customized background check that searches through county and municipal level records to confirm that the applicant doesn’t have a history of abuse in their background.

“All of these things that are really designed to make sure that when an advocate or a clinician is searching for a caregiver, they’re finding one of our caregivers that is best suited for the pet.”

Finding out what kind of pets the caregivers are willing and equipped to take in is also important, because the platform isn’t limited to dogs and cats, Bond said.

“A lot of people would maybe presume that that’s where it would end, but birds, rabbits, furry rodents, reptiles — those are also pets that mean a lot to these survivors and patients,” he said.

A group of therapy turtles were the first pets placed through the BestyBnB platform, according to Bond.

“That story was pretty gut-wrenching,” Bond said. “One of our pet caregivers was able to take in that group of turtles, restore and build them a new habitat, wait for that survivor to kind of get back on their feet and then reunite them.

“So we give a lot of customization ability for those caregivers; but then they also have to go through training videos that we have on not only how to use the platform, but how to welcome pets that have been experiencing trauma into their homes and some best practices there.”

The identity of both the person fostering the pet and the person seeking treatment is confidential to everyone except the agency for safety reasons, DeWeese said.

However, BestyBnB has a tool within the app that allows the two parties to communicate via a secure chat thread, so the pet caregiver can send photos and videos of the pet and also allow for the caregiver to ask specific information, Bond said.

“The pet caregiver can ask like, ‘Hey, the 4th of July is coming up, how does Lucky do with fireworks, anything I need to know?’ So, it keeps that communication going and removes all of the identity,” Krentz said. “We’ve got testimonials from some of our clinicians saying, ‘This client will come to me and say, ‘Look at this picture of my pet,’ and then have tears in their eyes just being so happy to be able to stay connected with them while they’re receiving services,’ so it’s something we’re very proud of, but it was a very technically intense portion of the software to build.”

While Johnson County is currently the only county using BestyBnB as a service specifically for mental health and substance use, the organization works with 11 other agencies to connect those who are dealing with domestic violence and homelessness to willing pet sitters.

The software is currently available in Missouri, Kansas and Oklahoma, but BestyBnB is in talks with different agencies across the country, including Hawaii, California, Washington and Florida, according to Bond.

“So, we’re actively working with those groups to get additional pet programs established in other communities.”