Give a little, get a lot: counties use zoning tradeoffs to encourage affordable housing 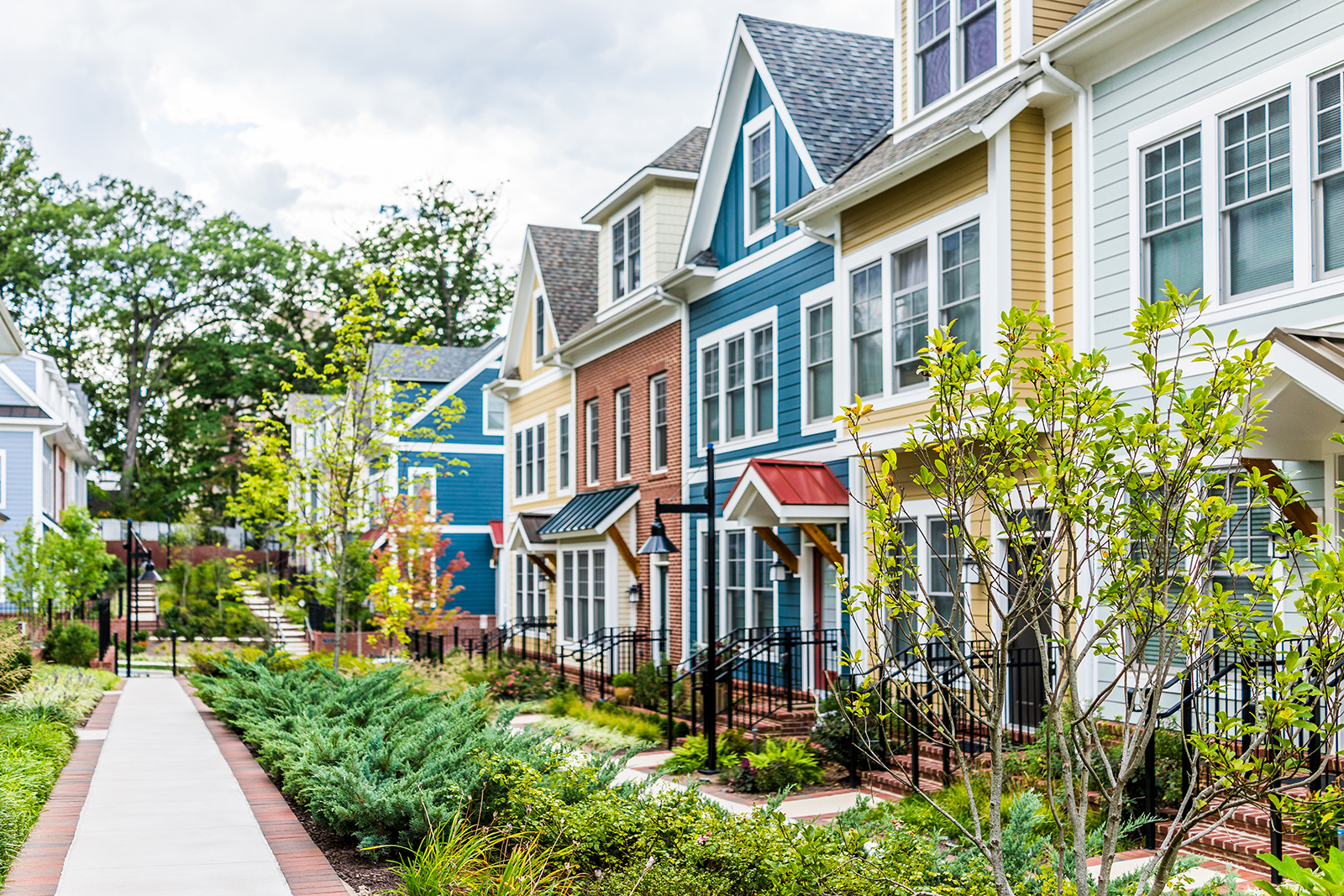 Call up Loudoun County, Va.’s offices and you’ll hear some fast-paced bluegrass music while on hold. It’s a trace of the county’s past, when it was known as “the country” to the Washington, D.C. Beltway before becoming a full-fledged part of the metropolitan area, with all the accompanying housing headaches.

The D.C. area has some of the highest costs of living in the country prompting Loudoun leaders to adopt zoning ordinances that encourage the building of affordable housing. Since 1993, the county has required any new development of 50 or more units to reserve 12.5 percent for buyers who earn 30 percent –70 percent of the area median income, currently $110,000.

It’s a strategy known as inclusionary zoning — Loudoun calls it the affordable dwelling program. More than 500 inclusionary zoning policies have been enacted across the country since 2000, according to research by the Lincoln Institute of Land Policy. Most of those policies are in municipalities in California, Massachusetts and New Jersey, but at least 17 counties have their own policies, including five in the D.C. metropolitan area — Fairfax County was the first in 1971. It’s one of several zoning policies counties use to encourage development of affordable housing. In fact, most are mandatory policies, though many offer the option of payments in lieu of building affordable units.

“It’s been successful, we have affordable dwelling units; we just don’t have enough of them,” said Ricky Baker, Loudoun County’s director of planning and zoning. “The big thing employers are looking for when they bring their projects here is the housing stock. We have to have the right kind of housing in the right area.”

Loudoun County also maintains a housing trust fund and is doing an inventory of vacant land it owns on which to build affordable housing.

The business case for affordable housing is simple. Developers would leave money on the table if they priced units below market value. But if they do that, some counties allow the developers to build more densely then they would otherwise be permitted, and having more units makes up the difference.

Counties’ inclusionary housing policies typically prescribe 10 percent – 20 percent of housing be made affordable, and that definition is usually 50 percent – 80 percent of area median income. The threshold size for requiring affordable units varies, from as low as four.

Most inclusionary zoning policies adopted by counties are in suburban areas.

“This idea of change is happening in the suburbs in a way that’s quite different than in the city,” said Lisa Sturtevant, a housing consultant and researcher based in Alexandria, Va. “The vast majority of us live in suburban jurisdictions where they’re seeing this pressure on the local character.”

Communities can react to that change with NIMBYism — not in my backyard —particularly when zoning affects the density homeowners expected when they bought their property, but Sturtevant said depending on what home rule powers their state allows them, counties have what they need to regulate development and incentivize affordable housing.

“Some communities are turning their backs, they say ‘We don’t see the value in creating more housing, that it’s just going to benefit the developers,’” she said. “There’s been some misunderstanding or at least not being aware of the tools that are out there, and for counties it is typically land use and zoning, that’s where their power is. Counties are in a great position to do this, depending on the kind of state you’re in and how much they have control of their land use.”

Suburban counties differ from urban counties when planning affordable housing programs because there’s more land available for new development, rather than infill, which motivates developers to work with counties to shape the future of that land.

In 2020, Loudoun County will be home to three light rail stations connecting it to Washington D.C. and Maryland. One station has a development on the way that will include 4,000 housing units, which means 500 affordable units will be among them.

It will be the kind of mixed-use development that is rare in once-rural Loudoun where cars are the main mode of transportation.

“We’re looking at a big wave of millennials, and there’s a clear demand for a different development type,” Baker said. “We really need to build the different types of amenities that are going to attract new workers. It’s clear we can’t be building the same products we’ve been building over the years and expect it to work.”

It will clash with Loudoun County’s traditional spread-out character, but Baker said the county is big enough for everyone to get along, as long as zoning is done consistently and fairly.

“Density is really a struggle for communities, when you look at mixed-use with lower density around it, you want to create those environments but still respect the property rights around those places.

“It’s just a matter of smaller houses and lots being better for some situations.”

The buildings, also known as granny flats, second units or carriage houses, are smaller houses that share a parcel with a primary residence. Local ADU ordinances regulate the location, minimum lot size, design standards, permitting process and zoning incentives. They are typically restricted to one ADU per lot.

Many are the size of a detached garage.

Where the ADUs are located goes a long way to determining if they are helpful, harmful or neutral to the cause of increasing affordable housing.

In Washington state, the flurry of construction has forced San Juan County to limit the number of new ADUs to 10 percent of the prior year’s new single-family homes.

“You’re seeing people building them for family members or to rent out, but they really haven’t made a dent in the supply of affordable housing,” said planner Julie Thompson. “I wouldn’t say they’ve helped.”

Meanwhile in San Mateo County, Calif. Supervisor Warren Slocum said that while some rental ADUs have popped up in touristy Half Moon Bay, he’s seen a lot in his district’s neighborhoods that haven’t shown up as rental properties.

“They’re integrated into the neighborhoods and seem to be used for permanent housing,” he said. “That focus on ADUs has been an important part of our overall housing strategy.”

San Mateo’s housing strategy is born out of an initiative, Home for All, which joins county and city officials, nonprofits and businesses to focus on affordable housing issues.

Slocum represents a largely unincorporated part of the county, with lower-income residents.

“I hear about it everywhere I go, that people are being displaced because of high rents,” he said. “While the job boom has been great in Silicon Valley, housing hasn’t kept up the pace.”

In nearby Monterey County, Carl Holm, director of the county’s Resource Management Agency, said that ADUs in urbanized parts of the county generally integrate well, owners of large properties in rural areas have built larger ADUs expressly for the purposes of renting, and they strain the groundwater supply.

“Inside the service zone, there’s capacity for these units, but they can really stress other areas.”

As part of its review of a new comprehensive plan, Loudoun County is considering easing restrictions for where ADUs can be located.

Though inclusionary zoning polices are at work all over the United States, they’re concentrated on the coasts.

“If you go to California or the D.C. suburbs, they’re all over this, but in Des Moines, in Indianapolis, they’re just starting to figure out how they should approach affordable housing,” Sturtevant said.

Polk County, Iowa, home of Des Moines, previously had an incentive program for developers willing to build affordable housing, but Bret Vandelune, planning and development manager, said it was discontinued due to lack of interest. “We decided to promote infill development in our existing neighborhoods.”

A combination of a booming insurance job market and a lower cost of living than Chicago has led to steady population growth in Polk County. In the absence  of incentives to build new affordable housing, the county is focusing on preserving what it has and keeping residents in their homes when their fates are in question.

“We have a lot of historic neighborhoods that were constructed right outside of the city limits, older housing stock on some aging infrastructure,” Vandelune said. “Most of the new growth in housing isn’t remotely affordable.”

“We want to stabilize the housing stock, so we don’t have to condemn and demolish the homes. The problem a lot of the time, is aging infrastructure.”

In some cases, the timing is just right for a fix. For instance, Vandelune said one common problem, deteriorated septic tanks, can now be fixed more affordably.

“The lots wouldn’t have been big enough for a replacement before,” he said.

In addition to keeping the housing stock viable for new residents, at the same time, the county is also focused on trying to limit the housing friction when people have to leave their houses because of disrepair. An income-based emergency repair program targets low-hanging fruit that mean the world to the resident.

“It’s amazing what a few thousand dollars can do when you’re dealing with a disabled veteran or a widowed person on a fixed income who can’t pay for a new roof,” he said.