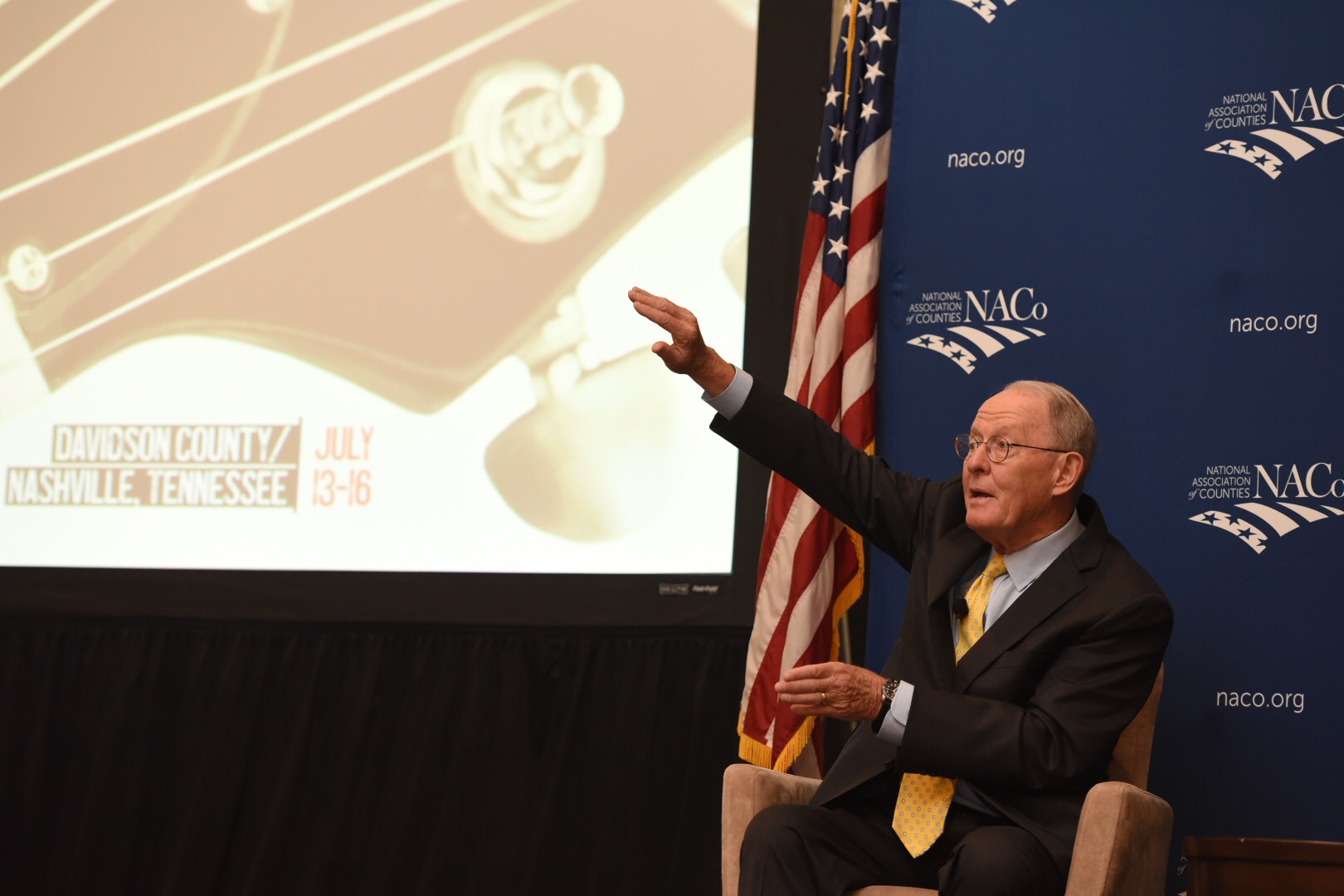 Ofo is one of several businesses offering dockless bicycles, for which users can make reservations using a smartphone app. By eliminating docking mechanisms, the bikes can serve a wider range, often as a last-mile mode of transportation between the end of a transit line and home. GPS devices on each bike allow users to find the closest one.

Dockless bikes are available in several counties, including Arlington County, Va., San Diego County, Calif., Cook County, Ill. and Montgomery County, Md., though some, including Miami-Dade County, Fla. are working on regulatory framework to manage use of these bikes, which can be abandoned in the public right-of-way or on private property.

Keeping track of the homeless

Boone County, Mo., is helping residents by visiting homeless camps and identifying people who are veterans in order to connect them with services at the VA; others are connected with mental health services, housing and other needs.

The county discussed its program after Chris Kingsley, senior associate for Data Initiatives at the Annie Casey Foundation, asked members of the Healthy Counties Advisory Board meeting Saturday morning for examples of how they’re using data.

From February 2016 through January 2018, the Boone County program has housed 275 people experiencing homelessness, including 142 veterans and 41 chronically homeless individuals and families. Members of the NACo Arts & Culture Commission received green and white buttons that said “Ask Me About $27.5 billion” at their meeting Saturday afternoon.

Guilford County, N.C. Commissioner Kay Cashion, who heads up the commission, said that’s the amount of dollars the arts brings to local communities. “I want you to wear those,” she said. “What an opportunity for us to talk about the arts. That’s the value of the return on investment.”

A preview of ‘Connecting the Unconnected’

San Diego County Supervisor Greg Cox, NACo first vice president, the association’s incoming president, previewed his initiative “Connecting the Unconnected” Saturday in a talk before a crowd at the Resilient Counties Luncheon. “One of the things that 2-1-1 service did in San Diego was really take an inventory of the non-profits,” Cox said. “There are more than 1,200 running 6,000 programs. But if people don’t know how to access them, what good are they? We have to have a way for people to get connected to services that are out there — 2-1-1 is the first intake for people in need of food,” for instance, he said. “We’re not dealing with just one issue. Too often we find ourselves in silos. What 2-1-1 has been able to do...we’re dealing with the entire needs of the family. We think it’s been a remarkable turnaround in San Diego.”

“In low-income communities, community investment has dropped off dramatically in recent decades,” Keele told LUCC members. He said that’s mainly due to consolidation of community banking.

The IRS offers an FAQ on Opportunity Zones here.

Comments are open until Monday, July 16 for the Bureau of Consumer Financial Protection’s call for feedback about whether the bureau is best protecting consumers.

Established by the Dodd Frank Act in 2010, the regulatory agency remains relatively unknown, but could be an effective tool for protecting the economic health of residents in rural counties.

It was designed to protect U.S. consumers, rather than relying on a network of agencies with different, disparate enforcement powers

“We have a massive responsibility to protect 320 million people,” Anthony Welcher, policy associate director for the bureau, told the Rural Action Caucus.

The bureau is preparing to release its 50 state report, listing the consumer complaints most common in each state, which will include county-level data. It is also continuing a series of town hall meetings throughout the United States to solicit feedback on what areas the bureau should focus on.

“We’re turning the tables, we’re not just sitting in the beltway, asking industry and community groups that have highly-paid individuals to sit there and to lobby the organization about where our priorities should be,” Welcher said.

He added that feedback from a recent town hall in Topeka, Kan. brought to light the prevalence of elder financial exploitation.

Addressing substance use disorders in your county: treatment

Destigmatizing the use of medically-assisted treatment for opioid addiction is crucial to long-lasting recovery.   At a Solutions Session, Dr. Dan Knecht, Aetna’s vice president for clinical strategy and policy, said the use of drugs like methadone, Buprenorphine and Naltrexone were “the cornerstone of treating opioid abuse disorder. Those drugs satisfy the cravings and withdrawal symptoms.

“Abstinence generally doesn’t work,” he said. “And you aren’t exchanging one addiction for another,” because of the controlled setting in which they are prescribed and their predictable effects on an opioid user’s body, versus the hazardous and often fatal illicit drug market, which includes heroin and fentanyl.

By 2022, Aetna hopes to increase the use of medically-assisted treatment of opioid addiction by 50 percent. By the same point, the company also wants to achieve a 50 percent increase in the share chronic pain cases being treated by evidence-based, multi-modal approaches, rather than relying on opioid-based painkillers and a 50 percent reduction in the inappropriate prescription of opioids.

Phillip Hasse, principal at RSM US, said that a holistic approach to treating physical and behavioral health was crucial.

“We stopped asking, because of the cost pressures, ‘did the person get better,’ ‘are they well’ or ‘are they happy or getting to the goals they have in life.’”

He said the trent to define health outcomes fueled a major loss of perspective in the healthcare industry that has left patients worse off.

“When we started defining outcomes, we struggled with measurement,” Haase said. “You can’t standardize outcomes, people are too unique, especially when you bring in developmental disabilities.”

Saying that government’s weakest link is where two agencies or departments intersect, covering the gaps in those connections takes on added importance.

Person-centered care is a complex problem,” he said. “What we need to is manage their needs with a goal of wellness, across programs and across agencies. Make sure they have vocational rehab, make sure they have a job... housing… social services... maybe SNAP or TANF.”

Eddie George is a football player. Ask almost anyone about him and that’s what they’ll say. That’s what he said, up until he was 31, when a mental lapse during a drill, while playing out the string on a bad season, forced him off the field.

Suddenly, the man who won the Heisman Trophy at Ohio State and was the face of the Titans when Tennessee’s still-new NFL team played in one of the most exciting finals quarters of the Super Bowl was on his own.

“They say an athlete dies twice,” he told the Opening General Session audience. “As an NFL athlete, that being you created is now done. You’ll never compete on that level as an athlete. That’s literally like watching a loved one die.”

George’s drive to play football stemmed from a hope that it would strengthen his relationship with his troubled rather, striving to be the player his father talked about instead of the legendary Jim Brown.

“Some handle (the end of their playing careers) better than others,” he said. “For me, why I played the game,it cut a lot deeper.”

Through counseling, he pulled out of a depression, started a landscape architecture business, a financial advising business an acting career and was a present father, husband, friend and family member. And 14 years later, he lives by four pillars that allow him to thrive.

Mentally, he allowed himself to shed the “me against the world” mentality that drove his collegiate career. He acknowledged that a man needs help to get through life, and therapy was crucial to maintaining his mental healthy.

“We think we can force things through by ourselves,” he said. “We probably can, but it will tear your soul apart and it will compromise your health.”

He continues a rigorous physical training regimen that he hopes will keep him alive to see his great-grandchildren, and also assuaging the aches that resulting from a bruising football career.

George credits his relationship with God to keeping him spiritually centered and aware of his place in the world. At the same time, he also keeps that place in the world moving by surrounding himself socially with people who challenge and keep him accountable

“If you’re the smartest person in the room, you need to get a new group of friends,” he said.