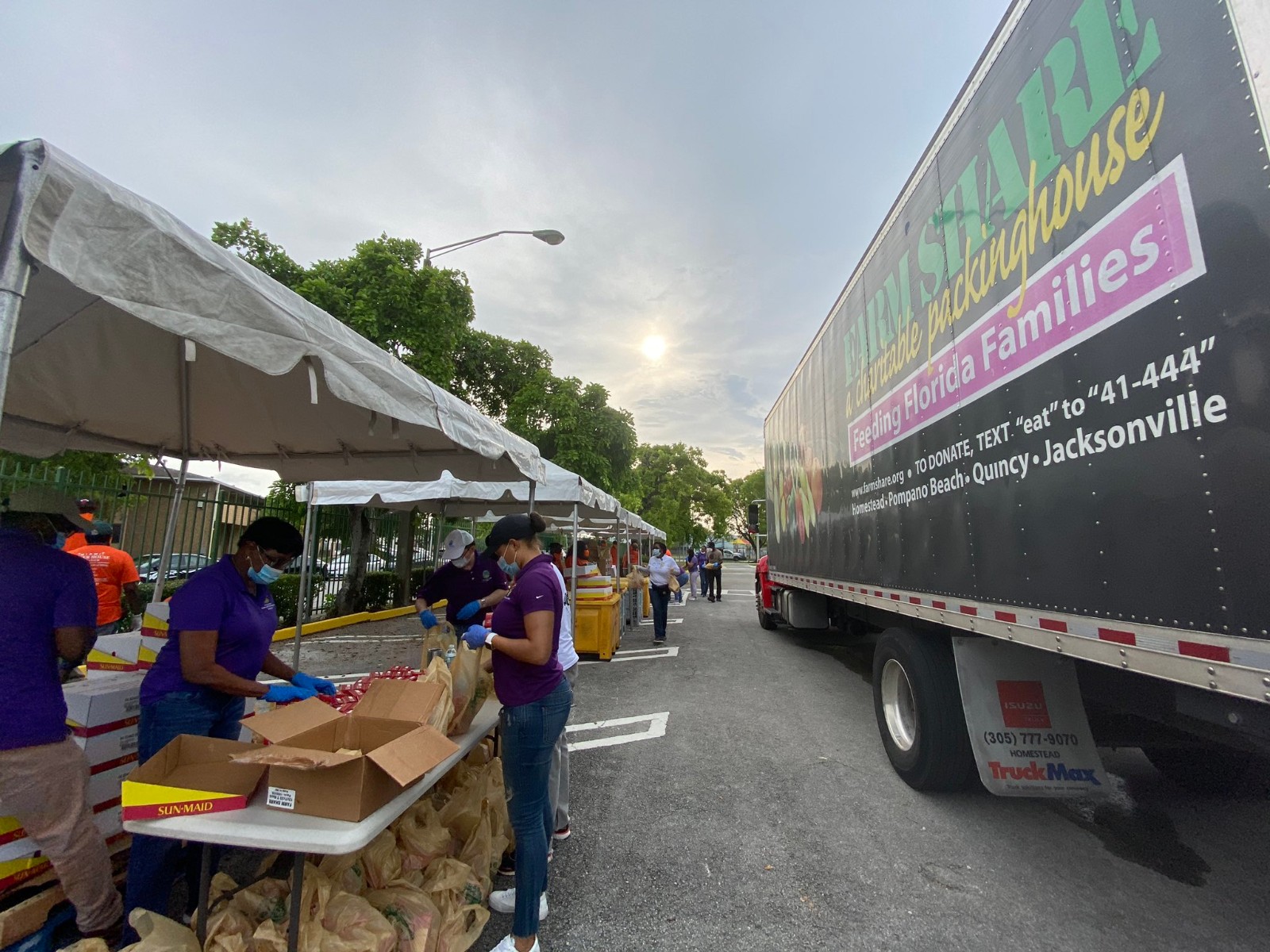 Miami-Dade County Chairwoman Audrey Edmonson stands behind a table during a free food distribution event for residents as part of the county’s efforts to provide food for those in need during the coronavirus pandemic. Photo courtesy of Miami-Dade County

With 30 million Americans filing for unemployment because of the COVID-19 pandemic, people are facing another challenge that comes with losing their jobs: Putting food on the table.

In Essex County, a diverse community made up of both suburban and urban areas including Newark, DiVincenzo said the county’s unemployment rate is always higher than the national average.

To help county residents who are struggling purchasing food, the county is holding a series of emergency drive-through food distributions.

During the first distribution, the county partnered with Community Food Bank, an anti-hunger organization. DiVincenzo and his staff placed over 2,000 boxes of food — the equivalent of 40 meals per week — in the trunk of each recipient’s car.

During the first distribution, they had to turn cars away.

“At that time when I was there at the site, I knew that we had to continue this program,” he said.

DiVincenzo is taking the free food distributions throughout Essex County and has held distributions in various communities with the plan to hold 10 in different locations. For the rest of the distributions, the county is purchasing food through vendors like Shop Rite and being reimbursed for the spending by the CARES Act.

“The people who were there say, ‘thank you,’ but you can see the look on their faces,” he described. “They’re very much appreciative of what we’re doing, but they don’t want to be there. They’d rather be working and providing their way.”

To hold the distributions, Curran set aside federal money that’s reimbursable through the CARES Act to buy food to support Island Harvest, a non-profit with food banks and food pantries.

The county partnered with the organization to set up distribution sites to hand out food items which included meat, yogurt, dairy, fruit and vegetables, canned food and pasta — enough food for a typical family for one week.

Each distribution covers around 900 to 1,000 people, with one site even seeing 1,300 recipients with individuals standing in lines snaking around several blocks.

The county has held drives at multiple locations with plans for more.

“We’re feeling the economic devastation here,” she said. “We have a lot of small businesses… a lot of mom and pop shops that can’t operate right now and people aren’t working.”

In Nassau County, SNAP applications tripled in April compared to April 2019, according to Curran.

“It’s going to take a long time to recover so the more the government can help get food to people, get resources where they need to go, that’s why we’re here,” she said.

In Florida, officials in Miami-Dade County are sponsoring various food distribution events to help those dealing with food insecurity.

During the distributions, recipients drive through the opening of a gate where volunteers instruct them to pop their trunks, Edmonson said. The food is placed in their trunks with items including frozen beef, canned goods, bread, cheese, orange juice, fresh fruit, raisins and vegetables, among others.

“You name it, we have been serving it,” she said.

One food drive distributed meals to 500 families and delivered 120 meals. Another fed 700 families and completed 50 deliveries, according to Edmonson.

For deliveries, county trucks and county employees bring boxes of food to the elderly and disabled who have called and expressed concerns over obtaining food.

“I want to do these deliveries as often as we can because we do have elderly who are shut in and have not been leaving their homes and they have to eat as well,” she said.

“You have people who have been living check to check,” she said. “Even if they had another month’s worth of funding to pay their bills, they’re out of those funds now and that’s why you’re seeing the different categories of people coming in.”

“We are noticing that if we put the flyer out for a 9 a.m. start to the distribution, some people are lining up in their vehicles at 1 a.m., 2 a.m. with children,” he said. “The indication of that was that people were hurting really badly.”

Martinez emphasized the important role of county officials who are familiar with their districts and aware of areas facing food insecurity.