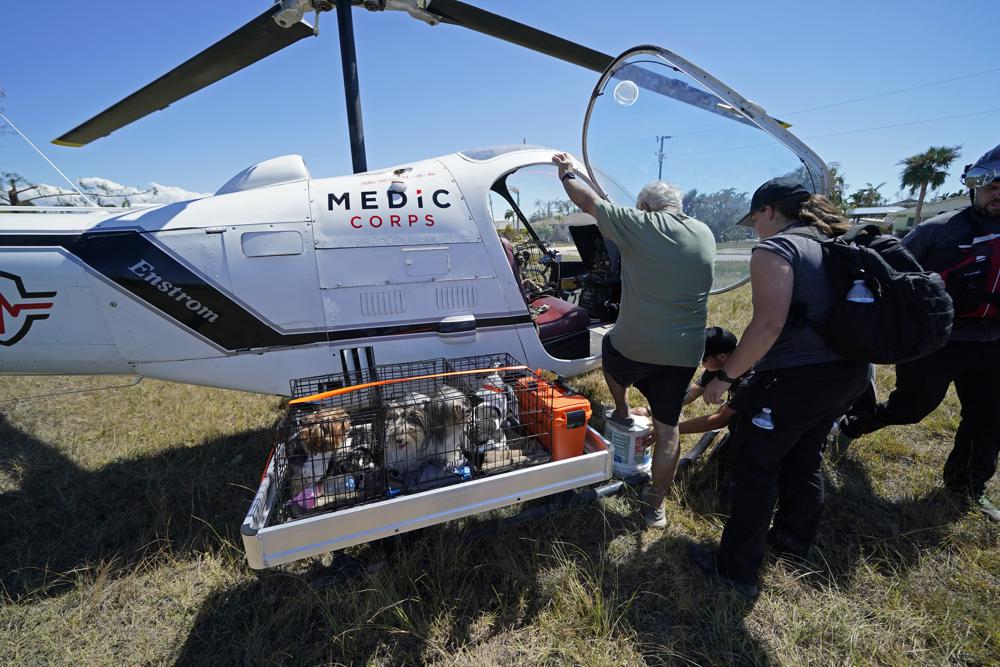 Counties in southwest Florida are picking up the pieces a week after Hurricane Ian made landfall in Lee County, slamming into Cayo Costa Island packing 155-MPH winds.

The deadly storm is being blamed for dozens of deaths across Florida, with many in Lee County.

Donate to the SWFL Emergency Relief Fund, in partnership with United Way of Lee, Hendry and Glades counties

Pendergrass took a call from President Biden Monday morning, with FEMA Administrator Deanne Criswell also on the call. They told the commissioner how they plan to support the county including search and rescue efforts, power restoration and helping address challenges faced by local hospitals and damage to roads and bridges. The president was set to visit Florida on Wednesday.

Other immediate concerns for Lee County included regaining power and water in some areas, removing debris from roadways and working with the Coast Guard to avoid an environmental disaster from oil and gas spills in the water from wrecked boats.

Some of the actions taken by the county after the storm included:

• Setting up eight distribution points for free food and water for residents impacted by the storm.

• Making transportation accessible to all courtesy of rides from the county sheriff’s office, the National Guard and LeeTran, the county transit bus.

• Creating a “pop up” building permit center, where the county could issue building permits on the spot for things like roofs, fences, wells and water heaters.

• Setting up a staging area at a local sports complex for first responders.

• Coordinating with the University of Florida mobile veterinary team to assist residents and their pets to offer medical care and pet food.

In addition to Lee County, other areas that took a punch from the storm included Charlotte, Collier, DeSoto, Hardee, Highlands, Lee and Sarasota counties.

Lee County Manager Roger Desjarlais fielded a question from a reporter at the news conference about the county’s evacuation procedures, after the county was criticized for holding off on evacuation orders until just a day before the storm hit.

“Decisions for evacuation are based on the best information given at the time,” he said, noting that shifting forecasts from a number of different models  had the storm making landfall in the Florida Panhandle or Big Bend area, and then Hillsborough County.

“It’s unfortunate,” Desjarlais said, that so many county residents decided not to take cover in county shelters, noting that “only 4,000 showed up. We had room for 40,000.”

“It’s regretful, no one feels worse than we do,” he said.

“Lee County hasn’t been hit by a storm like this ever,” he said. “You have to go back to the 1960s to a storm that even remotely caused this kind of damage…in modern history we haven’t had a storm like this. People become complacent.”

“Had I been living on a barrier island, where we had a 10-foot storm surge prediction and a Category 3? I would have gotten off the island. People should have vacated the barrier islands.”

Pendergrass noted that the county has its hands full now with recovery efforts. “We’re going to have long term affects here for the next few years,” he said. “We were already struggling with housing and affordable housing. People are displaced and going to be looking for jobs.”