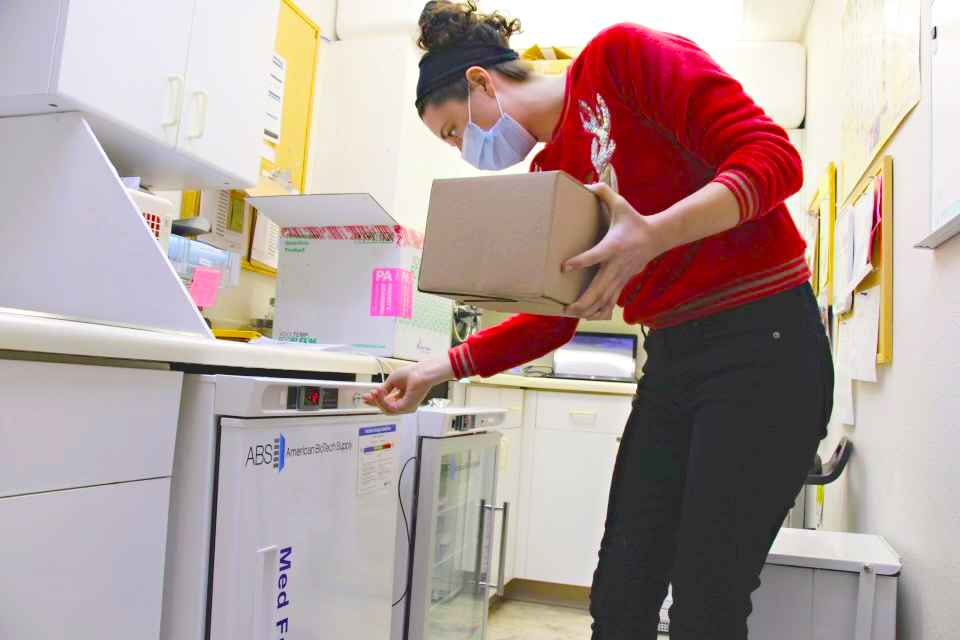 In order to filter by the "in queue" property, you need to add the Entityqueue: Queue relationship.
Grace Franklin planned to remake the San Miguel County, Colo. public health department, but a few weeks into her tenure as director, that all took a back seat to managing the county's response to the COVID-19 pandemic.

A lot about the San Miguel County job interested Grace Franklin. After five years working for the state of Colorado, it was an entry into county government and her first managerial role. It was a chance to essentially build a public health department. And the setting in the mountain town of Telluride offered the promise of a fulfilling work-life balance.

She’s still working on that last one.

A few weeks after she started as public health director, the COVID-19 pandemic preempted all of her plans and put her in front of a life-changing threat.

“My first week here, our public health nurse with a background in emergency preparedness said, ‘I need to tell you about the coronavirus, it’s something we’re going to need to watch,’ and I just naively thought ‘not yet,’” Franklin said. “Starting in March, I had to put away all of my plans and focus on this, full-time.”

With seasonal visitors adding roughly 5,000 people to the county’s 8,000 full-time residents, Franklin and the Board of Commissioners had to act fast to limit the spread of the virus that was already two weeks ahead while they learned more by the day. Together they set operating restrictions on businesses and tried to enact policies to limit community spread of the virus.

Along the way, she had a different kind of onboarding experience. By mid-March, a few local children developed serious respiratory infections, serious enough that one was taken by helicopter to a Denver hospital.

“The tone and the heaviness of that responsibility really set in then,” she said, more than a year after the child recovered from a non-COVID illness and returned home. “I’ve always felt responsible for different things, but now I went from being this much more slow-go policy shift to ‘we need to immediately address these concerns to truly save lives. If we sit idle, there’s going to be a lot of suffering.’ That was a really heavy weight.”

She was also forging a relationship with a Board of Commissioners that was just starting to embrace its dual role as the county Board of Health.

“We didn’t even have public health on the organizational chart,” said Commissioner Hilary Cooper. “A lot of counties seemed to not quite grasp the role they played — some commissioners saw themselves as fully involved, some figured decisions would be made by the public health director. We figured out it’s somewhere in between.”

But it was important early on, Cooper said, for the commissioners to take an active role early in the pandemic to support Franklin as she adjusted to her position.

“If we’d been hands-off, we’d be throwing her to the wolves,” she said, noting that wolves had not yet been reintroduced to San Miguel County. “At the beginning, Grace was very much unknown, but we had credibility to make some tough calls and put our names on them.

“As she developed a reputation of respect and was coherent and articulate and a good communicator, she was able to step into that leadership role.”

Franklin’s career started in her native Los Angeles, where she worked on nutrition programs for women, infants and children. She wanted to explore a systemic approach to health outcomes, moved to Denver for grad school, then worked in the state’s family planning office. In San Miguel County, she saw an environment she liked.

“The county was uniquely positioned with its leadership,” she said. “You could tell the commissioners understood what public health was, the importance of it. They were willing to put their support and their financial support behind it. That was key.”

“It’s asking how you take all the great work that’s already being done, how do you take the community voices to better understand their needs and their strengths? To really evaluate what is working and call out what is not,” Franklin said.

County Manager Mike Bordogna saw her working well with the Board early on.

“Her ability to create a positive, informed relationship with the board really led them to know they could trust her to be the one to issue the public health orders,” he said. “It could have easily gone the other way if she hadn’t been so communicative and so informed, if she hadn’t explained ‘This is how I get my information, how I make my decisions.’”

She participated in hours-long meetings nearly every day at the start of the pandemic, before loosening her schedule to every other day. Seven-day work weeks were common, Bordogna said, but Franklin found a silver lining in that frequency.

“The moment you’d say something, it seems like things would change, so I always had an opportunity to update people,” she said. “It was a great platform to keep everyone on the same understanding of a constantly evolving target.”

All the while, she tried to stave off burnout in the face of an undefined time frame.

“There was no work-life balance,” she said. “I was already steeled for the concept of isolation, but this took it to a whole new level. It took me years to build my group of friends in Denver, so I knew it was going to take more than six months to find my people here.”

She took some muted solace that she was not entirely worse off for having left Denver, where residents were even more restricted than in San Miguel County. She wasn’t missing out on any big social events.

“At least they weren’t having fun without me,” she said sardonically. “I was intentional about connecting with people on the phone or on Zoom. My colleagues forced me to have fun, at the very least we’d have walking meetings.

“It’s really easy to let exercise be the first thing to go, I focused on what brings me the most joy, like hiking.”

It’s hard to look for direct cause and effect relationships between public health policy and health outcomes because doing so relies on many elements, making the task similar to verbally directing someone how to play pinball. Instead of setting her goals based on contagion rates, Franklin focused on the strength of her professional relationships.

“What does communication look like between these different groups? Are people willing to partner with us? Will people be willing to call us out when we’re wrong? Is my staff avoiding burnout?” All were questions she asked.

Cooper helped direct retired public health veterans in the county to serve as a sounding board for Franklin, who developed a strong relationship with county Medical Officer Sharon Grundy and Franklin’s counterparts in other regional county public health departments.

“Any time I’ve struggled, they’ve been there to help me through things,” she said.

And, of course, she worked on her relationship with the Board of Commissioners.

“I don’t know them that well, they didn’t know me enough to trust me,” she said. “There were definitely times when we disagreed, but we did it in a healthy, constructive manner. They were also asking me how they can support me in a public fashion versus how they do so in the background.”

Cooper said the commissioners never felt like they were in a position where they had to blindly trust Franklin, and her credibility built up over time as she demonstrated competence.

“We knew what she was trying to do, we were on board with that from the beginning, and it was a relief when she was able to hire staff to share the load,” she said. “There’s something about being thrown into an emergency, right? You either step up into the emergency or you step out and let other people lead.”

Bordogna saw Franklin hold her ground a few times when public pressure was relayed through the board as the pandemic wore on and businesses chafed at restrictions.

“It’s tough to tell your ultimate bosses ‘No, I will not allow this and here’s why,’ and for them to go along with it when they hear about it from residents and business owners,” he said. “A lot of people in the community don’t know what public health does and where she would get the authority to tell them what to do.”

Bordogna credited Franklin with close coordination with different industries, listening to their concerns and finding workable solutions to allow them to resume operations safely.

“Every group felt like they had access to her, nobody rebelled,” he said. “Without their support, our community response to the pandemic wouldn’t have been possible. The hospitality industry didn’t when we restricted lodging, but she explained the epidemiology and why it made sense to limit capacity.”

She tried to institutionalize best practices for different industries but did so with two-way communication.

“I wanted to get a better idea about how the pandemic looks in their industry, how can we protect customers and workers,” she said. “With construction, we had a workforce coming from all over — Utah, Denver, other counties — and restaurants were an interesting take on harm reduction and people’s risk tolerance.”

‘We were a little lax on the enforcement side in favor of more education, unless it was egregious,” she said. “The educators helped institute best practices and got buy-in from businesses.”

That work paid off, Bordogna said, when lodging tax revenues for 2020 exceeded the prior year’s revenues in spite of the shutdown early in the year.

“We became a destination for safety-conscious visitors,” he said. “It was proof that having high standards doesn’t mean you hurt your businesses.”

San Miguel County’s vaccine distribution has gone well, without a national pharmacy chain to contribute. As of April 19, the county leads Colorado in proportion of its adult vaccinated, at 33.9 percent and 2,770 total vaccinated. Franklin focused on vaccine equity and allowed all non-English speakers to get vaccinated without appointments.

“It’s one fewer barrier they have to get past when there’s already some hesitancy,” she said.

She held video community forums, with question-and-answer sessions, which were also broadcast on the radio for non-internet users aimed at the town of Norwood, whose residents demonstrated skepticism toward the pandemic and vaccines.

Although the far western town of Egnar is closer to the Delores County seat of Dove Creek than it was to Telluride, she planned a vaccine event at its fire station.

“We wanted to make sure they felt like they were part of San Miguel County, that we weren’t foisting them on some other county just because it was more convenient,” she said. She sent postcards to every post office box in town and posters on local storefronts.

“The bottom-line value here is the health of families and friends. People genuinely care for people, they can disagree and still bring you a quiche when they know you’re hungry. It’s the remarkable beauty of rural America.”

If San Miguel County is able to weather the forces of additional visitors and the return of events and festivals as vaccination efforts continue, Franklin may soon be able to affect the changes in the public health department that she wanted and sold Bordogna and the Board on her 15 months ago.

“She was confident enough to stand up to a lot of questioning about ‘Who are you? Why are you telling us what to do when?’ She was very brave, courageous and calm, incredibly calm,” Cooper said.

“Our biggest goal for Grace is for her to be able to take some time off soon.”