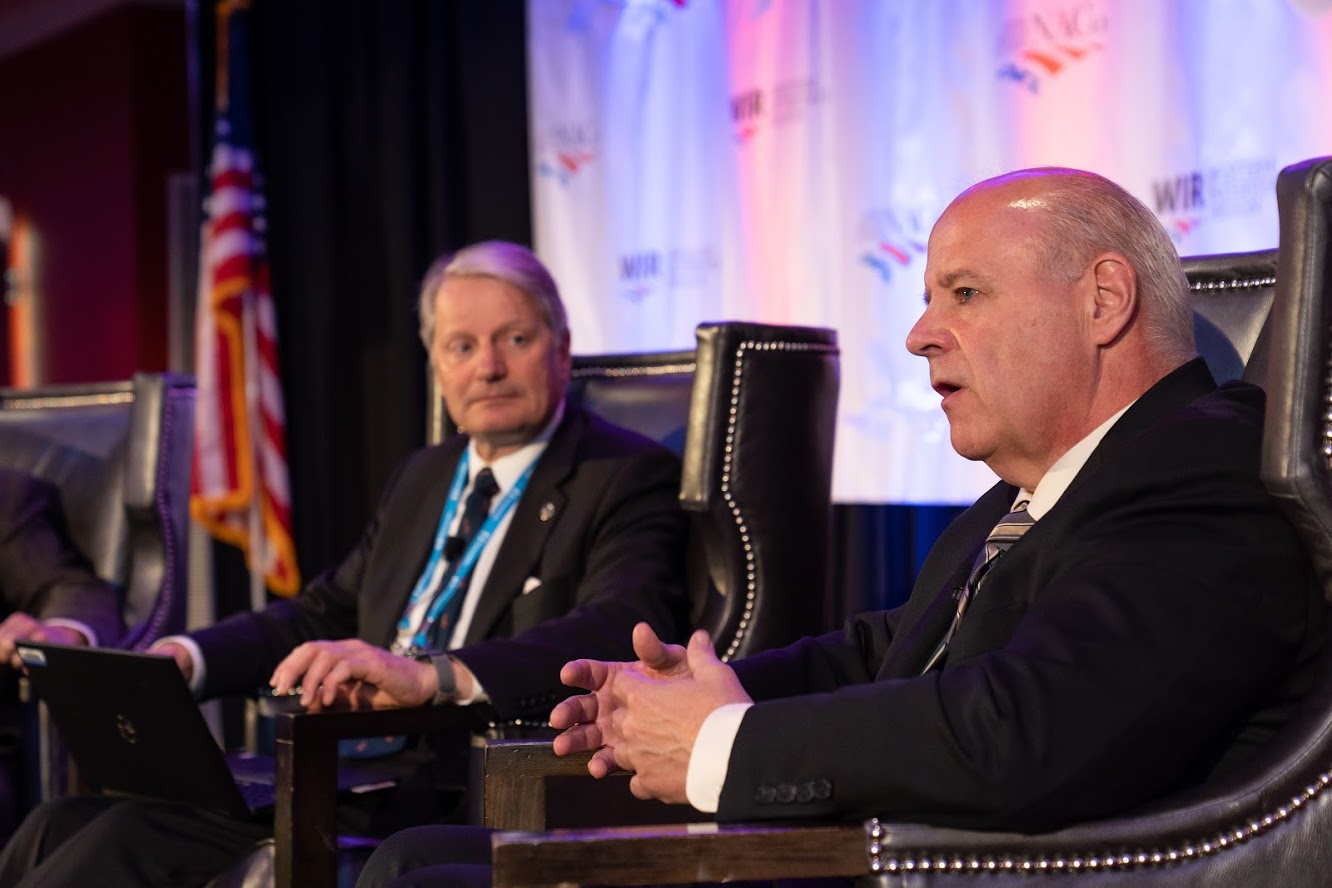 The USDA’s Kirk Pearson talks solutions to rural problems at the WIR conference as HHS’ John Graham looks on. Photo by Hugh Clarke

One of the federal government’s challenges in addressing the opioid epidemic springs from comparing the speed with which addiction can take hold and spread to the movement of bureaucracy. When federal agencies are designed for long-term efforts, changing their direction can take time, but that’s what the Department of Health and Human Services and the Department of Agriculture’s Offices of Rural Development have aimed to do, particularly in rural counties.

“People thought rural America was like Mayberry, they didn’t have those problems (addiction),” Washington Rural Development Director Kirk Pearson said May 17 in an address to the Western Interstate Region General Session. “Our rural folks are working folks, and they got injured and over-prescribed painkillers and got addicted.”

John Graham, Region 10 director for the Department of Health and Human Services, praised President Trump’s declaration of the opioid crisis as a public health emergency in October 2017, which allowed for more direct federal funding to combat the epidemic, speeding up delivery of that money.

Pearson stressed looking at the problem from different angles and finding novel ways to approach it.

“We fund some programs you might not expect, like Head Start,” he said. “Those kids have opioid addiction in their families,” and are collateral victims of substance abuse because their families are affected, he noted.

Pearson touted the local response in Grays Harbor County, Wash., as a model. The region’s economy is heavily reliant on timber, but the nature of the work and contraction of the market both lent themselves to substance abuse.

“People got injured out in the woods and needed treatment,” he said. “And when your economy hurts, sometimes people self-medicate.”

“It’s like a social service but in a hospital setting,” Pearson said.

Graham pointed out that data-sharing was crucial, but without uniform standards, it can be hard to compare numbers from different states and get an accurate representation.

“Data is the key to complex problems, especially when they connect and are associated with other issues like homelessness and criminal activity,” he said. “We want better data, we’re working with the state to improve the utility of our data collection.”

As a practical matter, he advised county governments to implement post-release treatment for inmates with addiction problems.

“Your highest risk of dying is when you’ve been released from jail and you’ve lost your tolerance,” he said. “If you don’t get encouraged to seek treatment, you can go back to your old cycle,” and the first dosage of certain drugs can be fatal.”

Pearson implored county officials to seek out their rural development state directors and give them a sense of what their county is dealing with and needs.

“I know it’s another meeting, I know you have lots of meetings all the time, but the more I hear, the more we bounce back ideas, the better I can understand a community’s need,” he said. “We can better direct resources to help folks.”

So just make an appointment to meet with them.