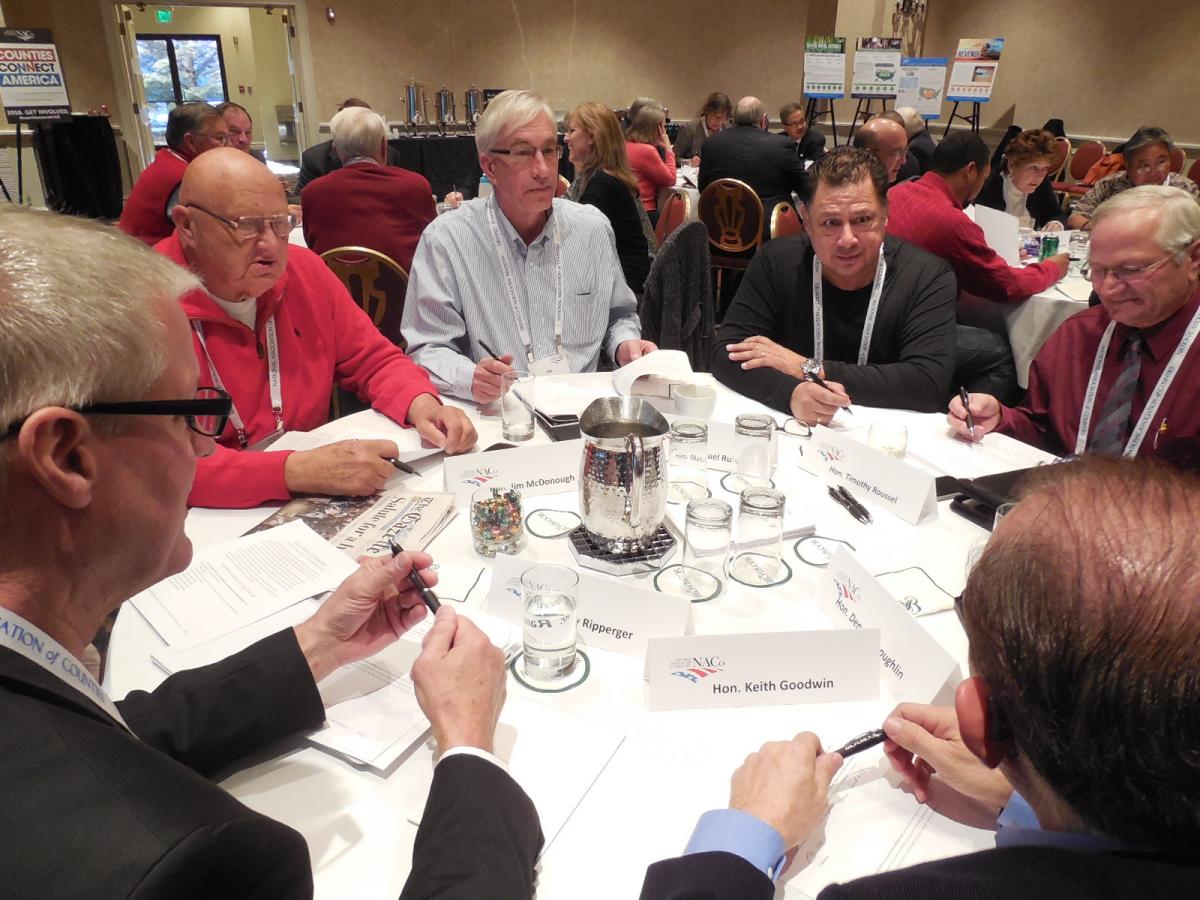 NACo’s Board of Directors approved a $14 million budget for FY16 at its meeting in El Paso County (Colorado Springs) Colo., Dec. 4–5. It also adopted a full spectrum of legislative policy priorities and participated in a forum where members discussed the pressures and demands counties face as they enter the 2016 federal election season.

The budget, which includes one-time costs associated with moving to a new headquarters building in the fall of 2016, also supports ad­ditional strategic priorities intended to protect, grow and diversify NACo revenue sources; invest in the association’s communications and advocacy infrastructure; and retain and recruit staff.

NACo Executive Director Matt Chase told the Board that the FY16 budget represented a “modest increase of 1.6 percent” and included a planned spend-down of $1.4 million of reserves to fund the office move.

The NACo Financial Services Corp. (FSC), which accounts for 52 percent of NACo’s current revenue, is projecting growth of 2.8 percent in 2016, while membership dues, which provided 28 percent of revenues in 2015, are expected to remain essentially flat with growth expected to be a little more than 1 percent.

Chase said NACo will make a concerted effort in 2016 to preserve and expand revenue sources. Re­tiree health care and infrastructure finance pooling are among the new value-added enterprise solutions the FSC is exploring for counties.

“Overall, NACo is a finan­cially strong organization with healthy reserves,” Chase said. “We continue to have steady revenue streams in conjunction with stable membership dues.”

Also on the list is support for collecting existing sales and use taxes from remote, i.e., Internet, sellers; policies to prevent and treat mental illness and substance abuse, and reduce the number of people with mental illness in jails; and restoring full funding for the payments in lieu of taxes (PILT) and Secure Rural Schools (SRS) programs.

NACo’s 10 policy steering committees also selected priori­ties for the new year. They range from modernizing biotechnology polices from the Agricultural and Rural Affairs Steering Committee to supporting broadband deploy­ment and adoption from the Tele­communications and Technology Steering Committee.

Board members received a sneak preview of the new County News redesign, which will make more use of illustrations, info graphics and photo images, and target coverage to include more stories about county innovations

Public Affairs Director Brian Namey walked members through the new design, which along with the website redesign, marks a major milestone in the NACo rebranding campaign and updated communication efforts.

Namey also shared with the Board new membership surveys that will be launched next year to gather data in an effort to streamline and target membership marketing activities.

The Board meeting resumed on Saturday morning, Dec. 5, with a lively extended dialogue on the present and future state of the nation’s counties. The County Landscape exercise, as it was dubbed, presented a series of 20 True or False statements guaranteed to spark discussion and an exchange of views.

The National Association of Counties (NACo) supports federal policies and programs that equip county governments with the resources and tools needed to effectively serve their residents. Each year NACo’s Board of Directors adopts the association’s federal policy priorities, which help shape NACo’s advocacy efforts on behalf of America’s counties. All NACo advocacy is shaped by its underlying core commitment to preserving local decision-making, and opposing unfunded mandates and preemption of local authority.

PROTECT THE TAX-EXEMPT STATUS OF MUNICIPAL BONDS: NACo supports the preservation of the federal deductibility of local prop­erty and income taxes and the tax-exempt status of municipal bonds that provide critical funding for public facilities, infrastructure and development. Provisions like the tax exemption for municipal bond interest have been part of the federal tax code for over 100 years, helping finance more than $3.7 trillion in public works projects.

PROTECT THE FEDERAL-STATE-LOCAL PARTNERSHIP FOR MEDICAID: NACo supports maintaining the federal-state-local structure for financing and deliver­ing Medicaid services. Counties continue to be concerned about measures that would limit the ability of states to direct supplemental pay­ments to county providers, curtail the ability of counties to contribute local funds to match federal dollars or otherwise shift health care costs to counties, including cutting, capping or block-granting Medicaid.

SUPPORT COUNTY AUTHOR­ITY TO COLLECT EXISTING SALES TAX: NACo supports legislation to permit the collection of existing sales and use taxes from remote sellers. The issue of taxing remote sales has compounded in recent years due to the extraordi­nary development of the Internet as a retail marketplace. As a result, state and local governments have lost billions in uncollected sales taxes and Main Street business find themselves at a significant competitive disadvantage to various online sellers.

PROTECT COUNTY INTER­EST IN “WATERS OF THE U.S.” RULEMAKING: NACo believes that local streets, gutters and human made ditches should be excluded from the definition of “Waters of the U.S.” (WOTUS) under the federal Clean Water Act. NACo calls on Congress to require the U.S. Environmental Protection Agency and U.S. Army Corps of Engineers to withdraw the new WOTUS rule and rewrite it in consultation and collaboration with state and local governments.