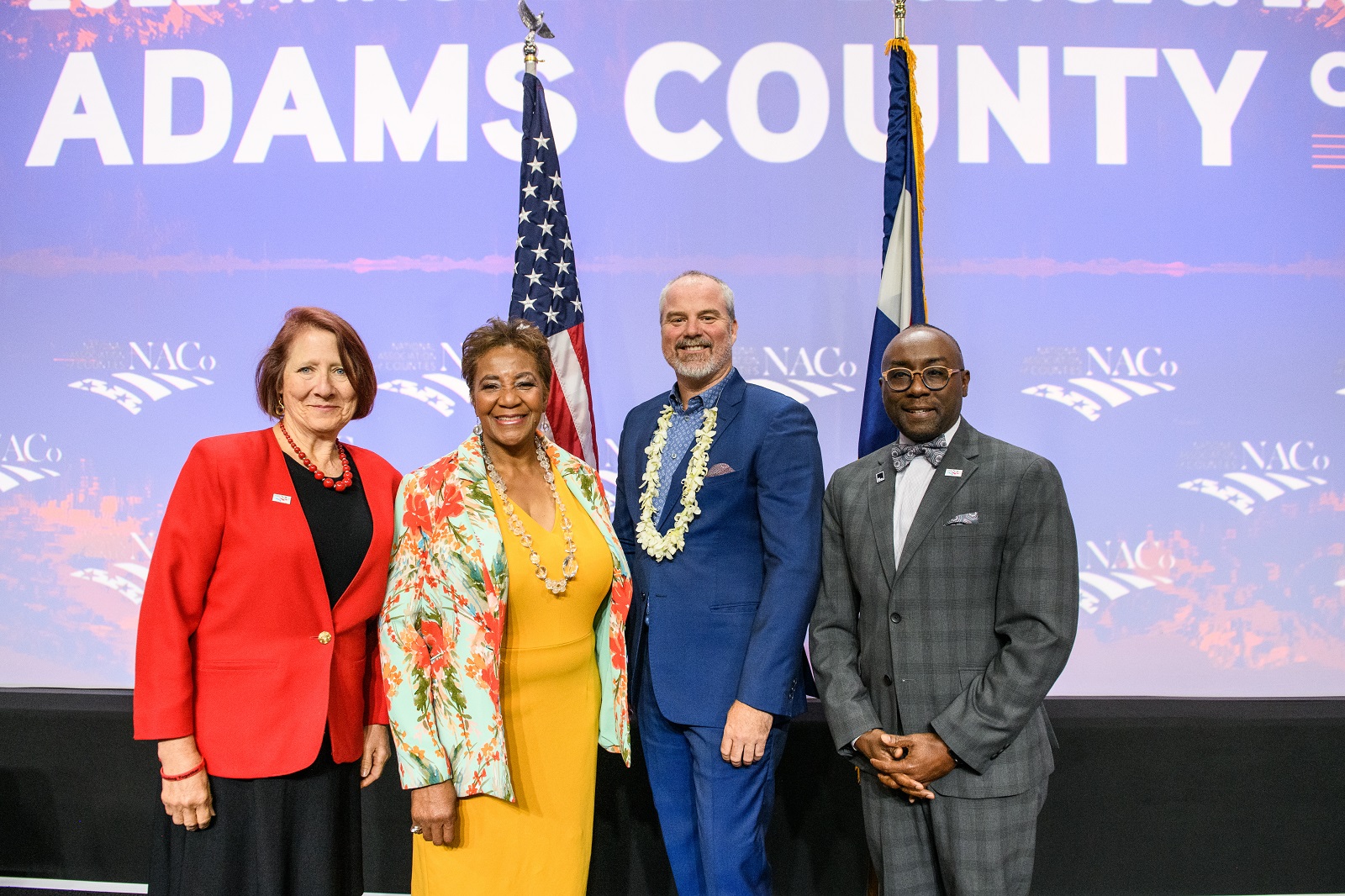 In order to filter by the "in queue" property, you need to add the Entityqueue: Queue relationship.
Will County, Ill. Board Member Denise Winfrey was elected president of NACo at the Annual Conference in Adams County, Colo.

Surrounded by her family, Will County, Ill. Board Member Denise Winfrey was sworn in Sunday, July 24 as NACo’s new president at NACo’s 87th Annual Conference in Adams County, Colo.

With her daughter Lisa and granddaughter Logan at her side, Winfrey was sworn in by fellow Will County Board Member Herbert Brooks, Jr.

“I’m pleased to announce today that RISE! will be the focus of my NACo presidency,” Winfrey told county officials gathered in the Gaylord Rockies ballroom. (RISE stands for Resiliency, Inclusion, Solvency and Empowering.)

“In the year ahead, we will share examples of county innovation in expanding Resiliency efforts, promoting Inclusion, establishing Solvency through economic mobility opportunities, and counties Empowering our residents by integrating human services with workforce programs to strengthen career pathways for vulnerable residents, like parenting women,” she said.

“We want to highlight counties on the RISE, particularly those attempting to address women’s equity in each of these areas.”

“The year ahead will include national public awareness campaigns, peer learning exchanges, and conversations on the county role in each of these areas,” she said.

Winfrey told the crowd that her parents helped her get where she is today. “So, who am I and how did I get here?” she asked.

“I can honestly tell you…It’s my parents’ fault. Some of you have heard me speak of their community involvement. They were big on ‘get out the vote’ efforts. As a child, my brothers and I were in the back seat of the car putting together candidate literature. My mother drove while my father knocked on doors. They were working to get the first Black person on the Will County board. My mother also worked for years as an election judge. My father poll watched and drove people to and from the polls.”

Winfrey thanked Boone County, Ky. Judge/Executive Gary Moore for his work on broadband as immediate past president and DeKalb County, Ga. Larry Johnson on his THRIVE initiative as president. She gifted Johnson with a scrapbook, a framed copy of Johnson and President Biden in County News, as well as an organizer case for the bow ties he’s known to wear.

Winfrey began her ascent to the presidency when she was elected second vice president of NACo in 2020. She began her career as a member of the Joliet, Ill. Township Board. She has served on the Will County, Ill Board since 2009.

Gore, an immediate past president of the California State Association of Counties who recently was reelected to a third term as supervisor, won the vote by 71 percent in a three-way race with Loudoun County, Va. Board Chair-at-Large Phyllis Randall and Mercer County, W.Va. Commissioner Greg Puckett.

Before the voting began, the crowd heard nominating speeches for each candidate.

Cleveland County, Okla. Commissioner Darry Stacy gave a nominating speech for Gore, telling the crowd: “We worked together side by side for eight years and never once did it come up as to what political party either he or I were a part of. That’s James. It’s not about your party, it’s about what you can do for your residents. I have to tell you, there’s a time for everything and I personally believe this is the time for James Gore to lead NACo.”