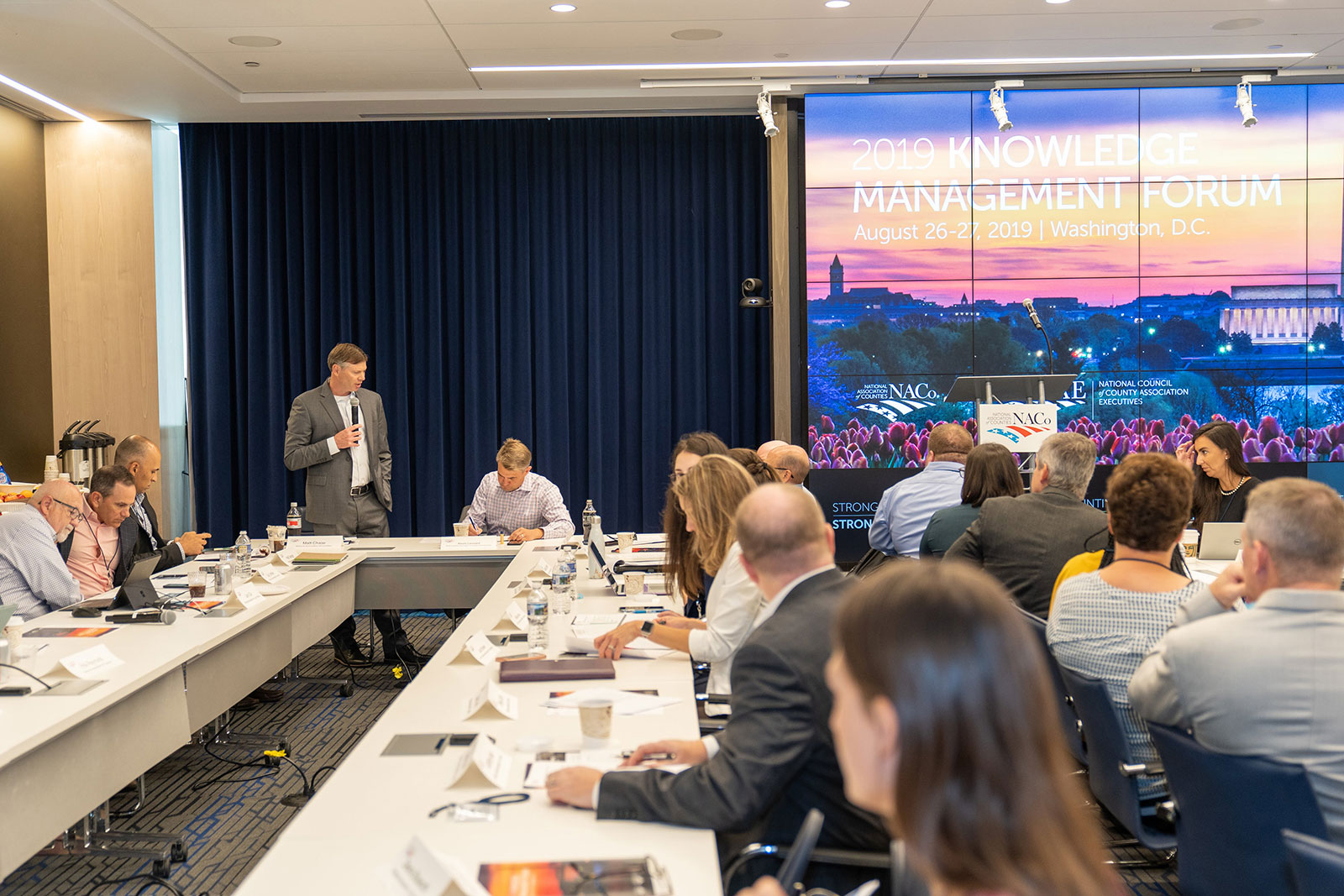 In order to filter by the "in queue" property, you need to add the Entityqueue: Queue relationship.
NACo staff and personnel from state associations of counties tackled common issues at the Knowledge Management Forum

Senior representatives from NACo and members from state associations of counties met last month to share their perspectives on legislative priorities during a roundtable-style discussion at the 2019 NACo-National Council of County Association Executives (NCCAE) Knowledge Management Forum held at NACo headquarters.

Through a survey and other research, NACo gathered information from 89 percent of states with a state association of counties and identified three main legislative priorities:

Participants worked to narrow down specific issues regarding these priorities during the discussion.

“We need your stories and how you approached these things in your counties and in your state associations so we can take the next step,” said Kevin Leonard, executive director of the North Carolina Association of County Commissioners, who welcomed attendees to the forum.

The discussion kicked off with justice and public safety, with Leonard explaining that counties in North Carolina are dealing with inmate medical issues.

He referred to the suspension versus termination issue that involves connecting eligible individuals with Medicaid to reduce the long-term costs for county jails.

Clint Mueller, legislative director for Advancing Georgia’s Counties, discussed the gap between the time when inmates are released and when they can access Medicaid or other human services programs, which poses challenges specifically for inmates who are on medications.

Other state association representatives agreed that inmate medical issues are a top priority and emphasized the behavioral health and the human services side of the conversation.

State association representatives all agreed that counties across the country are facing challenges with substance abuse services, re-entry programs, a lack of resources for mental health problems and addiction issues.

In Washington state, counties are dealing with the rising costs of public defense lawyers, where only 4 percent of the costs are paid for by the state and the remaining balance is the responsibility of the counties.

“It is a cost that is completely outside our control and it is constantly growing,” said Paige DeChambeau, external communications manager at the Washington State Association of Counties.

‘Not only unfunded, but under-funded mandates’

The conversation during the finance, pensions and intergovernmental affairs discussion focused on unfunded mandates.

While some states have a complete catalog of mandates in the state, many others have difficulties listing what mandates they must follow because there is no complete mandate catalog.

“I think the conversation should be not only the unfunded but the under-funded mandates,” said Lucas Beenken, a public policy specialist with the Iowa State Association of Counties.

In Iowa, Beenken explained there are many under-funded mandates, specifically involving fees.

He explained that state services are provided at the local level, but the amount retained from a fee is not enough to cover the cost of doing business, he said.

According to Beenken, the state may get the largest chunk of a fee that’s collected, even when the county is doing the majority of the work.

Representatives from the state associations discussed maintaining a healthy tax base in regard to property taxes, sales taxes, online sales transactions and utility-replacement taxes.

Geoffrey Neill, a principal policy and fiscal analyst at the California State Association of Counties, said property taxes and unfunded mandates are connected in California. Properties are required to be reassessed every year, but the value can’t increase by more than 2 percent unless the property changes hands or is newly constructed. He explained that properties that don’t frequently change owners have lower property taxes.

In North Carolina and Pennsylvania, among other states, a pressing issue that is the responsibility of counties is funding new voting machines that produce paper ballots.

For many state associations, transportation was a top issue.

Participants at the Knowledge Management Forum delved into the transportation topic by discussing funding distribution formulas, structural deficiencies with roads and bridges, fees for electric vehicles and urban versus rural funding.

A hot topic was finding ways to raise the gas tax.

Julie Ring, executive director of the Association of Minnesota Counties, said the association is facing challenges with divided perspectives among members on the gas tax. She explained some commissioners in rural counties are opposed to raising the gas tax.

In Montana, the state association created the Montana Infrastructure Coalition that consists of civil contractors, representatives from the chamber of commerce, architects and engineers to advocate for increasing the gas tax.

“It changed the conversation we had with elected officials about a group of statewide, fairly prominent, mostly politically active people coming to the legislature saying to the state, ‘You need to do something and increase the gas tax because our infrastructure in terms of roads and bridges is falling apart,’” said Eric Bryson, executive director of the Montana Association of Counties.

While the gas tax did increase in Montana, Bryson noted that the gas tax was turned into a grant program and counties have to apply for the increase.

Afterward, participants worked to establish a strategy on a specific issue before the next NCCAE meeting in October and focused on how to get the word out by training for media messaging.