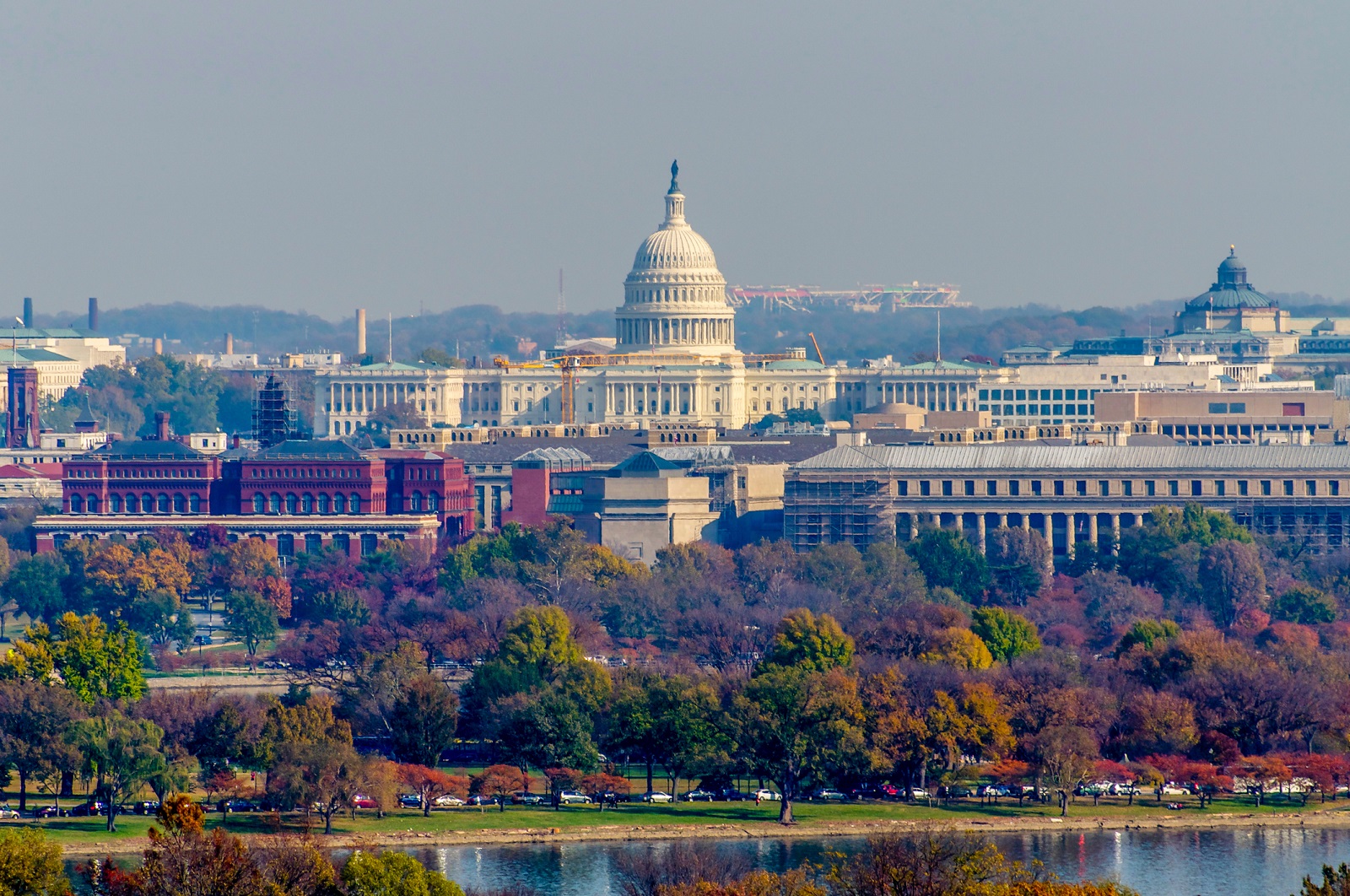 With the 2020 general election behind us, Congress will return from recess this week for a lame duck session that is expected to extend well into December. With plans for the lame duck session largely contingent on the uncertain outcomes of this year’s election, congressional leaders have provided few concrete details.

Currently, with a Republican-led U.S. Senate and Democratic-led U.S. House of Representatives, how Congress will proceed with its remaining work is what many counties and citizens across the country are focused on.

With just a few weeks left in the 116th Congress, members are faced with a long list of unfinished business including the need to reach an agreement on a coronavirus relief package after months of stalled negotiations. Lawmakers must also pass Fiscal Year (FY) 2021 funding legislation to avoid a government shutdown when the current Continuing Resolution (CR) expires on Dec. 11.

The next few weeks also provide one last opportunity to finalize other outstanding legislative issues such as ongoing negotiations on Water Resources Development Act (WRDA) and reauthorizations of key health care extenders.

The top priority for many lawmakers during the lame duck session is coming to an agreement on a coronavirus relief package.

Since March, Congress and the administration have worked together to adopt four federal coronavirus aid packages, with the first two bills targeted at public health strategies, nutrition assistance for children and older adults and enhanced federal support for paid sick and family leave.

The third package, the Coronavirus Aid, Relief and Economic Security (CARES) Act (H.R. 748/P.L. 116-36), provided hundreds of billions of dollars in loans and grants to major industries and small businesses as well as direct cash payments to individuals.

Most notably for counties, the CARES Act established a $150 billion Coronavirus Relief Fund for state and local governments to address COVID-19 expenses. These funds directed aid to local governments with populations of over 500,000 to address necessary expenditures incurred due to the public health emergency.

Prior to the election, House Speaker Nancy Pelosi (D-Calif.) and U.S. Department of Treasury Secretary Steve Mnuchin were locked in a series of negotiations over the last few weeks with both parties expressing optimism and stating they had made considerable progress. However, just days before the election, the prospects of a deal seemed unlikely amid ongoing disagreements over provisions such as additional state and local aid, unemployment insurance and liability protections for businesses.

After unsuccessful attempts to reach a deal on COVID-19 stimulus aid before the election, Pelosi signaled that she hopes to pass additional aid during the lame duck session in Congress. In a similar tone, Senate Majority Leader McConnell (R-Ky.), who sailed to reelection last week, announced that passage of a new coronavirus aid bill was a top priority for the lame duck session.  Previously, McConnell had talked about passing a coronavirus stimulus bill at the beginning of 2021.

As counties continue to play a significant role in mitigating the spread of the COVID-19 virus, NACo research estimates that the coronavirus pandemic could have a $202 billion budgetary impact on counties of all sizes through fiscal year 2021, including $172 billion in lost revenue and an additional $30 billion in COVID-19 response costs.

Heading into the lame duck session, lawmakers will now pick up where negotiations were left off prior to Election Day.  NACo will continue to advocate for a robust coronavirus relief bill that ensures counties of all sizes have access to additional direct, flexible funding to fight this pandemic, rebuild the economy and strengthen our communities.

Another high priority for lawmakers this lame duck session is reaching a spending agreement to extending current government funding past the expiration of the current CRF in early December. Lawmakers must decide whether to negotiate with the current administration to enact long-term spending legislation to fund the government through FY 2021 or enact another stopgap spending measure that would allow the time for a presidential transition to occur and negotiate appropriations legislation.

How Congress addresses challenges of funding the government will have a direct impact on many county priorities that rely on federal discretionary spending, including: COVID-19 pandemic relief, unemployment insurance, the Payments in Lieu of Taxes program and the Community Development Block Grant. Ultimately, Congress must decide whether to negotiate.

Prior to the election, Congress was unable to pass or enact any of the 12 annual appropriations bills. The U.S. House was successful in passing 10 of the 12 spending bills in July 2020. On the other side of the Capitol, the U.S. Senate was not able to advance any of the spending bills through committee.

Unable to pass any of those spending bills, Congress adopted a CR, which extended FY 2020 funding levels for most programs.

House and Senate leadership elections on the horizon

In addition to their legislative work, the House and Senate will also elect new leaders for the 117th Congress during the lame duck session. Party leadership in both chambers are expected to remain relatively as is.

In the Senate, McConnell easily won reelection and is not currently facing any challenges to his leadership position. Sen. Chuck Schumer (D-N.Y.) is also expected to remain as the Democratic leader. A big question mark for the Senate: A runoff in Georgia for those Senate seats.

With the Democrats maintaining control of the House, lawmakers will need to decide in the coming weeks if they want to keep their leadership team in place or make changes. Before the election, party leaders had projected increasing their 233-seat majority but are on track to narrow their hold on control in the House after upsets in several swing districts.

Currently, there are no challengers to Pelosi for her leadership position. In addition to Speaker Pelosi, Majority Leader Steny Hoyer (D-Md.) or Majority Whip Jim Clyburn (D-S.C.) are likely to retain their positions, but it is common after an election where a party loses seats for there to be some members looking for a change. There are no major challengers expected for Republican leadership in the House with Leader Kevin McCarthy (R-Calif.) and Minority Whip Steve Scalise (R-La.) expected to stay in their current roles.

In addition to congressional leadership positions, there is expected to be some movement at top committee posts due to term-limits, retirements or lost reelections. Typically, chairmen and ranking members are nominated by the Republican and Democratic steering committees and confirmed by the respective party caucuses.

As Congress elects new leaders and congressional committees are reorganized, NACo will provide an analysis of these changes and the potential impact on county governments.

Although many details of the lame duck session remain fluid, NACo is actively monitoring several issues of importance to counties that could arise during the last days of the Congress in addition to those mentioned above.

Although an incoming administration may encourage Congress to hold off on passing substantive policy legislation, Congress could decide to continue its work on substantive measures. One item for action would be the Water Resources Development Act (WRDA).

Earlier this year, the full House passed its WRDA bill, and the Senate passed its bill out of the U.S. Senate Environment and Public Works Committee.

Negotiations between the chambers have been ongoing since the summer. While both bills reauthorize U.S. Army Corps of Engineers water resource projects, the Senate bill includes funding for drinking water and wastewater programs. Because the House and Senate bills differ, an informal conference committee has been working to reconcile policy differences between the two. Should the informal conference committee reach an agreement between the chambers and the Trump Administration, Congress may be able to act quickly and pass WRDA.

Congressional leaders have also indicated they plan to reauthorize several key health care extenders of importance to counties, which are currently set to expire on Dec. 11. These extenders include funding for community health centers, a delay of disproportionate share hospital (DSH) payment reductions, and funding for health workforce programs like the National Health Service Corps.

Prior to the election, both Congress and the Administration signaled interest in reconciling differences on surprise medical billing. To address this issue, current legislation focuses on ensuring cost transparency for out-of-network services and limiting patient cost-sharing rates.

Despite disagreements in the approach for addressing this issue, it has been a largely bipartisan effort and may see movement during the lame duck session. Surprise billing legislation is of key importance to counties as it may impact reimbursement rates for local EMS providers and rural hospitals.

With the COVID-19 pandemic drawing attention to existing racial and ethnic disparities in health care, lawmakers’ focus has turned to addressing maternal and infant mortality. Currently, there are dozens of proposed bipartisan bills in both the House and Senate that focus on maternal health and health disparities.

Prior to the election, two bipartisan bills advanced out of the House.

The Helping MOMS Act (H.R. 4996) would extend postpartum coverage under Medicaid and the Children’s Health Insurance Program (CHIP) from 60 days to one year and the Maternal Health Quality Improvement Act of 2020 (H.R. 4996) would expand initiatives to address maternal health in rural areas and promote innovation in the field. Both bills would benefit local health care access and outcomes by expanding Medicaid services as well as address underlying causes of maternal mortality with new funding.

The Senate plans to consider both bills during the lame duck session, with the potential to be included in a legislative package with other similar maternal health bills.

Prior to the election, Reps. Glenn Thompson (R-Pa.) and Madeleine Dean (D-Pa.) introduced the Leveraging Options for Counties and Localities (LOCAL) Act (H.R. 2854).

As established under the CARES Act, if a county does not spend its entire CRF allocation by Dec. 30, 2020, the remaining dollars will be recouped by the U.S. Department of Treasury.

Understanding the unpredictable nature of the pandemic, the LOCAL Act seeks to provide local governments flexibility to plan ahead.

The bill’s strict deadline does not allow counties to plan for future costs in 2021 and beyond.

The bill also encouraged states to distribute a portion of their CRF allocation to counties with populations of less than 500,000 that did not receive direct funds.