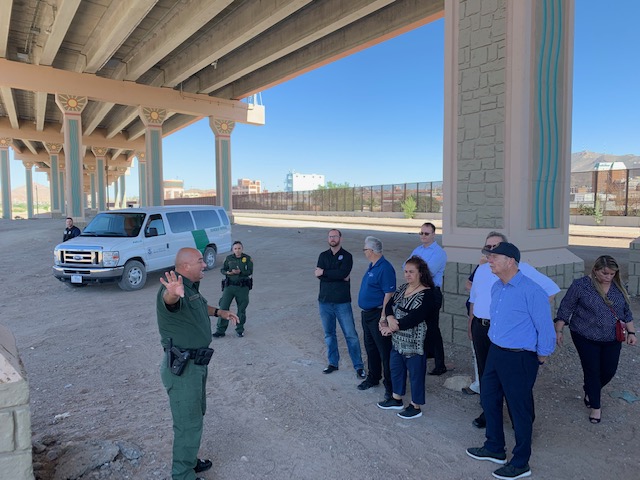 In order to filter by the "in queue" property, you need to add the Entityqueue: Queue relationship.
Giving county officials a first-hand look at the immigration process is the first step toward advocating for meaningful reforms to the system

Two dozen county officials got a close-up view of the U.S. immigration situation recently as they watched a woman and her family cross the border from Mexico into the United States after a 13-day trip from Honduras. The county officials were there to tour the El Paso Border Station Number 1 along the U.S.-Mexico border in El Paso County, Texas. The station was designed specifically to address the needs of migrant families, like the woman, her baby and two other children.

The woman made her way to the border station after standing under an overpass, where a border patrol agent spoke to her in Spanish while taking her into custody.

The visitors who made eye contact with the woman took her shaky smile, the look in her eyes and a lot of information home with them to the counties they represent, in hopes of relaying the true stories of life working on or trying to cross the border.

“I feel like this is something that has been ignored for my entire life,” said Bill Truex, chairman of NACo’s Immigration Reform Task Force. And he didn’t absolve himself. “I didn’t understand it until I went there and saw it myself.”

Truex and other members of the task force went there for an in-person look at conditions facing both federal agents and migrants, unfettered by the spin and opinion that tints some media coverage. The task force is designed to help county officials better understand the issues and challenges facing the immigration system.

With that perspective in hand, county officials plan to appeal to their members of Congress to address and fix structural problems in the immigration system that have led to a humanitarian crisis along the border. The trip came after the Department of Homeland Security released its Migration Protection Protocol (MPP), commonly referred to as its “Remain in Mexico” policy, which requires all non-Mexican migrants requesting asylum along the southwestern border to return to Mexico to await their day in immigration court.

“The rhetoric is unhealthy,” Truex said of the national immigration debate. “I tell the task force that we have to be the people who have the right conversations based on data and facts. Don’t buy into the media; stick to an area where we can remain bipartisan, focus on results and solutions. We all needed to have a better understanding so we can help correct the conditions that exist and what our policies are.”

“The purpose of my visit to the border was not to become a proponent of illegal immigration,” Umatilla County, Ore. Commissioner George Murdock wrote in a column published by his local newspaper. “But there is no doubt that for both practical and humanitarian reasons, I have become an even stronger advocate of finding ways to address immigration policy in a meaningful way.”

Murdock is the vice chairman of the task force.

Salt Lake County Mayor Jenny Wilson said it was hard for any of the county officials to not be touched by the humanity they saw in either of the two facilities on the tour.

“I had children try to hold on to my legs and try to engage with me,” she said. “We were asked not to engage them. We broke the rules. We’d give smiles, we’d give some sign of affection to them just because the environment is so sterile that I don’t think any of us would think we were doing the right thing if we didn’t, in some way, acknowledge their presence.

“I thought I’d see a family there. We saw hundreds of people being processed in a single day. The last thing I expected to witness was a true apprehension of a family on our nation’s border.” That said, Wilson was one of several task force members on the tour who left with a clear path forward.

“We walked away feeling that there are two or things we could advocate for right away,” she said.

First off was the Migration Protection Protocol, which shuttles migrants into uncertain situations while they await their hearings. Another was the definition of a family, which from the U.S. side, scrutinizes the nuclear family but for families from Latin American cultures may include grandparents, uncles, aunts and cousins. If people, even though they may be related, don’t appear to be part of the same nuclear family, there is no guarantee they will stay together after their processing.

The tour also clarified roles and responsibilities, dispelling the myth that border security is a tightly-wound machine. Separate functions are carried out by DHS and the Department of Health and Human services (HHS). DHS conducts border security functions, while HHS provides care for children.

“The funding for HHS is really something that we have to talk about because they don’t have enough support, facilities or infrastructure to handle these influxes,” Truex said. “That’s when (families) get held up, they’re held in facilities that aren’t designed for comfort. It’s a temporary facility, but they’re packed in a pod with no room to sit down or lie down.”

“Without HHS having the ability to expand structure or staff or both, I don’t think this is going to go away anytime soon.”

Considering the functions of regulating immigration and border security, counties seem like an odd party to show interest. Not to Truex.

“We all need to have a better understanding so we can help correct the conditions that exist and what our policies are,” he said. “Counties can advocate directly to Congress to fix what is going on. They aren’t listening to a lot of people, but we represent boots on the ground, the people in our areas who have concerns about the influx, what services are available. We need to be aware of how this could affect our community.”

The day after she returned from El Paso, Wilson said at a news conference that the money the county put into the trip was “the best $1,000 the county has spent in a while.”

Her experiences at the border helped her understand how the immigration system works. “It will better prepare me as a mayor for the future,” she said. “We are engaged as a county with this community, we have a growing Latino population. Our economy is largely energized and reliant on people who come here from other nations.”

She saw where local government differs from federal roles in the process.

“Ultimately the sheriff, the council and I can say we’re done, we’re going to set our ceiling on the Salt Lake County Jail at a certain level,” she said, “We do have a soft ceiling now, we try to work within it with our policies. Border patrol and customs do not have that allowance, they serve everyone, they have a process, they have a systemic way of doing things. The system was tested beyond its limits some time ago.

“We all know the immigration system is broken. I saw it with my own eyes.”

Like Wilson, Murdock and Truex, county leaders will share their firsthand experiences at the border and work with Congress and the administration to reshape federal policies to ensure that the enforcement of immigration laws are executed in a manner that minimizes negative impacts on families and children and does not increase reliance on local social safety-net services or create new demands and administrative costs for counties. Many border counties find themselves inadvertently interacting with the immigration system if they care for migrants they apprehend inland, or deploy medical examiners and indigent burial for those who die en route.

“The more we educate, and the broader our task force grows, the more opportunity we have to increase support we have,” Truex said. “It’s a lack of education and a lack of knowledge of what’s really going on. It’s a complex issue and it’s easy to get caught up in the media hype. It really is important to focus on data and facts and work from the basis of a non-partisan approach. It can’t be about a party.”

Even as the task force continues its work, Wilson said it’s important for counties to remain attentive to the needs of the immigrant community. “It’s important that the local governments step up when federal government fails,” she said.

NACo’s membership adopted four principles at the 2019 Annual Conference related to immigration reform, including measures that pertain to supportive services and resident well-being.  NACo’s new policy will allow the task force and broader membership to work with Congress and the administration toward counties’ shared goals of ensuring the health and well-being of all residents regardless of immigration status.

And the woman and her children who the task force members saw? On the border and in the processing center?

Now processed and issued a court date, the woman and children left on a bus to Juarez under the Migration Protection Protocol, where her immigration status would continue.

After touring the El Paso Border Station, task force members visited a refugee center in Ciudad Juarez, Mexico. The center, which was an old concert hall, had a capacity of 1,700, and houses people from El Salvador, Honduras and Guatemala, among other Central American counties. Their presence there, rather than on U.S. soil, is a direct consequence of the Migration Protection Protocol. Here, they will await court dates in the United States to pursue their claims for asylum.

So far this year, at least 42,000 non-Mexican migrants have been sent to Mexico under the MPP program, and a growing number have opted to return to Central America instead of waiting.