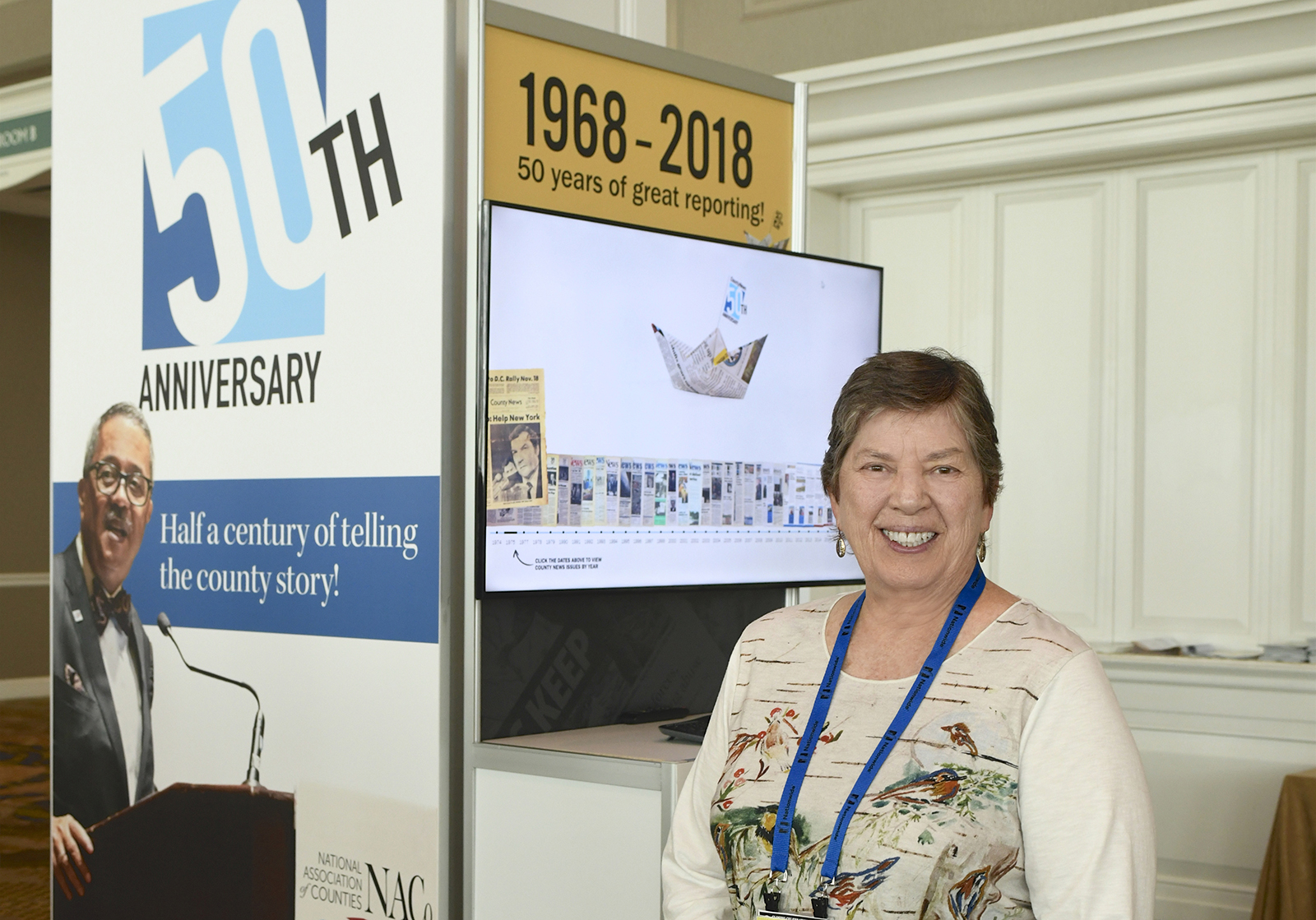 Bev Schlotterbeck shows off the kiosk displaying the County News archive at the 2018 NACo Annual Conference in Davidson County, Tenn. Photo by Lana Farfan/Caught in the Moment

In order to filter by the "in queue" property, you need to add the Entityqueue: Queue relationship.
For more than 30 years, Bev Schlotterbeck guided County News into what it is today with her drive, curiosity, commitment and passion for good journalism

If you’re getting County News, you’re seeing the best of what NACo and county government have to offer. That’s the way Bev Schlotterbeck wanted it for more than 30 years.

She spent nearly all of that time as editor and used that position to drive the paper toward relevance, usefulness and necessity for the tens of thousands of county officials who read and shared each issue around the office. She retired from NACo at the end of 2018.

Tom Goodman, who started as NACo’s public affairs director within a month of her hire, saw that drive every week.

“She was totally committed to County News, committed to producing a good, valuable product,” he said. “She saw this as such an important thing, because for many people, County News was their only link to the association. They couldn’t come to conferences or meetings, but they could get the paper every two weeks.”

A Washington County, Md. native, Bev headed to Pittsburgh for college and began her career as a social worker, public relations specialist and a reporter at a weekly paper covering Allegheny County suburbs.

As a social worker, she successfully challenged the plan to institutionalize the six-year-old son of a mentally-limited mother who herself had been misidentified as mentally challenged, an achievement she called her “proudest moment” in 1992.

When she expressed an interest in moving to the Washington, D.C. area, her managing editor called her son, who was then County News’ editor, and instructed him to hire her, personal friend Georgette Blanchfield recounted. Within a year, she settled in Fairfax County, Va. and a year later, assumed the job of editor.

Her NACo tenure was inspired by a drive to learn about the country and get to know the men and women who worked in county government, and she formed a fast friendship with Kay Braaten, then a Richland County, N.D. commissioner who served as NACo’s president from 1991-1992.

“Bev was somebody who I really appreciated because she was a source of information that nobody else had, and she had no difficulty telling me if I was wrong,” Braaten said. “I loved that, because it kept me out of a lot of trouble.”

That frankness and directness was her trademark around the office, including her own, which was decorated with an ornament that read “you can tell a German, but you can’t tell them much.”

“She’s honest and thoughtful and everything you want in a coworker and as a friend,” Braaten added.

As an editor, Bev was driven by the urge to break news, be timely and compete with anyone. She blanched when people referred to County News as a newsletter, former Senior Staff Writer Charles Taylor recalled.

“She is a dyed-in-the-wool newswoman and she cares about what real newspaper people care about,” he said. “She challenged us to do good work and she set high standards.”

Former Senior Staff Writer Mindy Moretti saw the same in Bev, but as a reporter just starting her career.

“Having Bev as an editor made me a better writer,” she said. “Editing is part of what I do now and she made me better at the job that I do. She was great about allowing us to have our niche and develop skills and expertise in a topic.

“She was tough as nails as an editor, but anyone who writes will tell you that’s what you want.”

Bev’s drive was put to the test Sept. 11, 2001. After the attack on the Pentagon, the NACo office was cleared, but County News was in the middle of a production week. Some of the biggest news in the nation’s history was breaking, but circumstances were preventing her paper from playing a part.

“We were back in the office the next day,” Moretti said. “This is how the terrorists don’t win; you do what you need to do to get the paper out. People took pride in doing their jobs, and she certainly did.”

When honored for her 30 years of service to NACo, Executive Director Matt Chase reported that what Bev recalled the most about that time was 9/11.

Her determination on display in 2001 wasn’t an aberration, though. During a snowstorm one Thursday night of a production week, she lobbied then-Executive Director John Thomas to finance hotel rooms for the production staff, so they could work without anxiety over travel before or after their jobs were done, Goodman recalled.

Throughout her 30 years, she never missed a publication deadline, sometimes trekking up to the Montgomery County, Md. printing facility to troubleshoot in the middle of the night.

“She was always committed to making sure the paper came out well,” Goodman said. “When members were getting their papers late, she looked into having them printed and mailed from different places. She’d dive into the print quality and the lighting of the photos.”

Away from the newspaper, she served as staff liaison to the Women of NACo and represented the delegation on a number of trips, including one to Japan in 2011.

Bev is a technology enthusiast and was an early adopter of social media and driver of the County News website’s development. She is fascinated by the potential of innovations like unmanned aerial vehicles (drones) and augmented reality. She balances that with a low-tech love for gardening.

“She has an insatiable appetite for work,” Blanchfield said. “She has a way of always making things better, even in the worst of times, because she always knows the right words.”