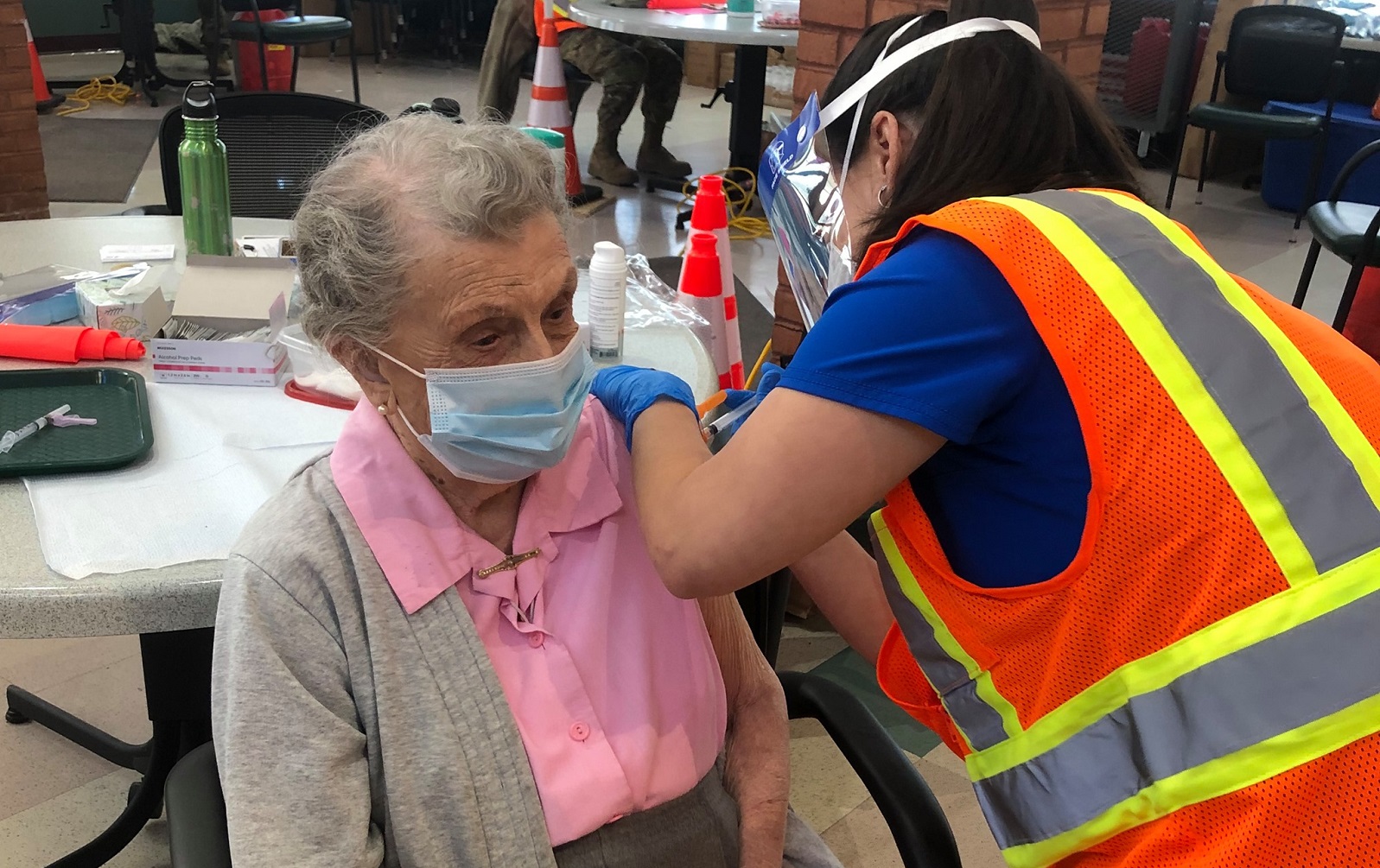 A woman receives a COVID-19 vaccine at one of the Carroll County, Md. age 75-plus clinics at the end of January. Photo courtesy of Carroll County Health Department

The nation is undertaking its biggest vaccine effort in history and the process for allocating doses to counties has proven to raise some challenges.

Specific amounts of COVID-19 vaccine doses are made available to states and jurisdictions with weekly allocations, according to the U.S. Department of Health and Human Services. The allocation process then varies for how states distribute vaccines to counties.

In Maryland, equitable vaccine distribution was developed using a pro rata formula based on county populations, according to the Maryland Department of Health.

Vaccine allocation to jurisdictions is based on critical populations, current local spread of COVID-19, vaccine production and availability, according to the state’s COVID-19 vaccination plan.

“We send up a request every week and there’s a mystery about who’s making the decisions and we get back a magic number,” Singer said.

Singer, who is also president of the Maryland Association of County Health Officers, said local health departments have only been getting 30 percent of the allocation of vaccines statewide with the rest going to private pharmacies, hospitals and mass vaccination sites.

“We’ve been very concerned because the state has put a lot of emphasis on mass vaccine distribution sites and trying to stand up more points of distribution and we feel like they’ve got the cart before the horse,” he said.

Maryland is in phase 1C of its vaccination rollout, which includes adults ages 65 to 74 and essential workers in lab services, agriculture, manufacturing and similar industries.

Although the state has progressed to 1C, Singer said the county health department still hasn’t reached half of county residents over the age of 75 who were included in the 1B category. The county only receives around 1,000 doses per week and has over 11,300 individuals in the 1B group.

“We haven’t moved on to 1C because we feel like we need to concentrate on our most vulnerable citizens and we just don’t have enough supply,” he said.

Jurisdictions and health officers throughout the state signed a letter to the governor calling for more transparency in the state’s vaccination plan and stated that local health departments should be given more priority when it comes to vaccine allocation.

“We all agree that the state is doing this wrong and they ought to be letting the locals figure out how to get this to the people who most need it in our jurisdictions,” Singer said. “All we’re doing is spreading a small amount of vaccine over a very large number of providers and it’s not helping us reach the people who need it the most.”

In Texas, there is no set formula for vaccine allocation, but the goal is to allocate equitably throughout the state, according to the Texas Department of State Health Services.

The Texas Commissioner of Health appointed an Expert Vaccine Allocation Panel that makes recommendations, according to the department. A few factors influence the commissioner of health’s decision on allocation including mitigating health inequities, data-driven allocations and geographic diversity.

“It’s kind of like making sausage, it’s done somewhere out of sight and we really don’t have the ability to understand exactly what that worksheet looks like,” Tarrant County, Texas Judge Glen Whitley said of the allocation process.

Texas has three Federal Emergency Management Agency (FEMA) vaccine sites with one located in Tarrant County bringing an additional 21,000 vaccines to the area per week.

Whitley said the county was under the impression that the FEMA site would not reduce the county’s weekly allocation from the state, but the number of doses decreased by around 11,000.

“It’s more inconvenient, because now a lot more people are going to have to drive a further distance to get to the vaccine site,” he said.

Whitley said the county has three hubs and nine other locations that receive vaccines from the state.

“What I would say to the state is instead of allocating to so many different players within a certain county, send it to the county and let the county be the arm of the state in getting those vaccines out,” he said.

In Lewis County, Wash., Director of Public Health and Social Services JP Anderson said there are 13 eligible providers approved by the state to receive vaccines.

The county has only received enough doses to vaccinate 7 percent of the population, compared to the state average of 14 percent.

Anderson said he is unsure what formula the state is using to allocate vaccines to his county.

“We’re seeing growing disparities between counties presumably shared on a state formula but that has not been shared with us,” he said.

Anderson said this decision created a lopsided supply and demand dynamic with only 100,000 doses coming in per week. His main concern is related to throughput.

“Although they’ve been good at getting lots out, they’ve done a poor job of doing it equitably,” he said. “This is a case where you really need to listen to the local health directors...  because it’s our job to advocate for the people in our community. I understand the strategies of the state, but if you don’t take into account those voices, you end up having people who aren’t represented at the table.”