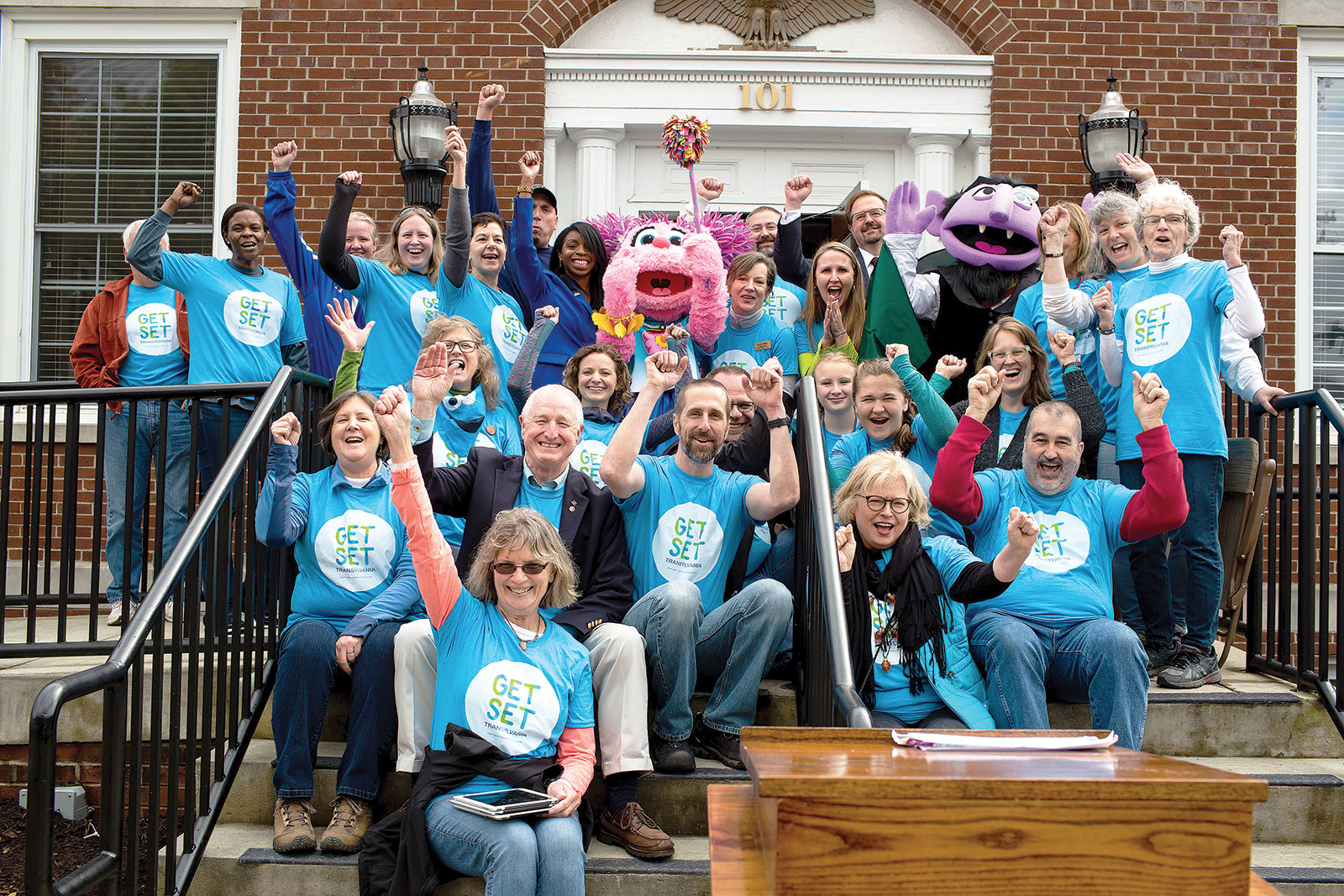 Characters from Sesame Street join the partners of GetSet Transylvania at Halloweenfest in 2018. Photo courtesy of Jenni Chandler Photography

A rural county in North Carolina is working to improve the lives of children with the help of collaborative organizations that stretch from mobile playgrounds to Sesame Street characters.

GetSet Transylvania focuses on using existing resources to improve early childhood in Transylvania County. The county acts as the backbone organization for the community through a collective impact model that involves more than 22 entities including government agencies, nonprofits and local businesses.

The initiative began in May 2015 when the county released the State of the Young Child Report, identifying early childhood issues involving education, physical health, mental health, recreation and family resources. The report identified challenges children and families face in the community.

The report found that 78 percent of kindergarteners tested below or far below proficiency at the beginning of the 2015 school year.

When Transylvania County Commissioner Page Lemel first heard this statistic, she knew she needed to find a solution.

“If we were able to get our children into school ready to learn, then the whole community would benefit from that,” she said.

Lemel worked with Transylvania County Manager Jaime Laughter to brainstorm solutions to help youth in the county. They agreed that many organizations were working in different ways to help children, but not working together in one single effort.

The main takeaway from the meeting was to understand each organization’s role and how they can remove duplicated services by communicating and coordinating available resources, Lemel said. She added that the county did not want to establish another bureaucratic layer such as a 501(c)(3) because they did not want to compete with existing agencies for finances.

“We don’t have the ability to tax our citizens because we’d be taxing the very people we’re trying to help,” Lemel said.

Both Lemel and Laughter said the county does not have large companies investing in county-related projects.

“We started seeing some natural coordination or collaboration start to pop up and our different groups at the table started to partner,” Laughter said.

The GetSet collaborative involves subcommittees that focus on communication and meet regularly over a brown-bag lunch.

To combat the low proficiency for kindergarteners, GetSet Transylvania held workshops for preschool teachers and kindergarten teachers to talk about kindergarten curriculum and what skills are needed. By the next year, the county saw a 12 percent increase of children prepared to enter kindergarten.

The collective held programs put on by different providers including county parks and recreation, the county library, a local family nonprofit and a local domestic violence shelter. One program, the Family Dinner Series, allows families to come together for a meal provided by a local business and learn about various topics such as healthy crockpot cooking or how to talk to children about sexual health. Additionally, GetSet Transylvania established mobile playgroups, an indoor playground, topic kits that can be checked out from the library and summer half-day camps.

The 2015 report also found that the county had seven times the state average of babies born addicted to substances. By identifying that the problem was that methadone treatments were located far distances outside the county, a local physician began providing county residents with treatment options. The health committee saw an immediate change by 2017.

“I think we recognize that prevention is really where investment is going to make a long-term impact,” Laughter said.

Lemel continued to advocate for youth even at the state level, which led to her sharing information about the collective as part of Kidonomics, a two-year series hosted by the Institute for Emerging Issues at North Carolina State University. While at the conference, she met the vice president for U.S. Social Impact with Sesame Workshop to suggest that Sesame Street in Communities consider Transylvania County as its first rural pilot community — and it worked.

Transylvania County joined the Sesame Street partnership as its first rural county. The goal of the partnership is to reach families that were previously not engaged in the GetSet Transylvania collective.

“It very much matches up with how we have approached early childhood, which is looking at the whole child,” Laughter said. Lemel explained that Sesame Street represented a trusted brand to residents in the county.

“We didn’t want to push families any further away from support services,” she said. “When you deal with Sesame Street, you’re not dealing with somebody telling you what to do. You’re dealing with an open door that allows people to come in at their leisure and then you’re able to make that connection with them.”

Lemel said she attributes the success of GetSet Transylvania to the various groups working together.

“We are very willing to treat everyone in that space as equals and because of that we have all risen together and we have done some very good things here,” she said.