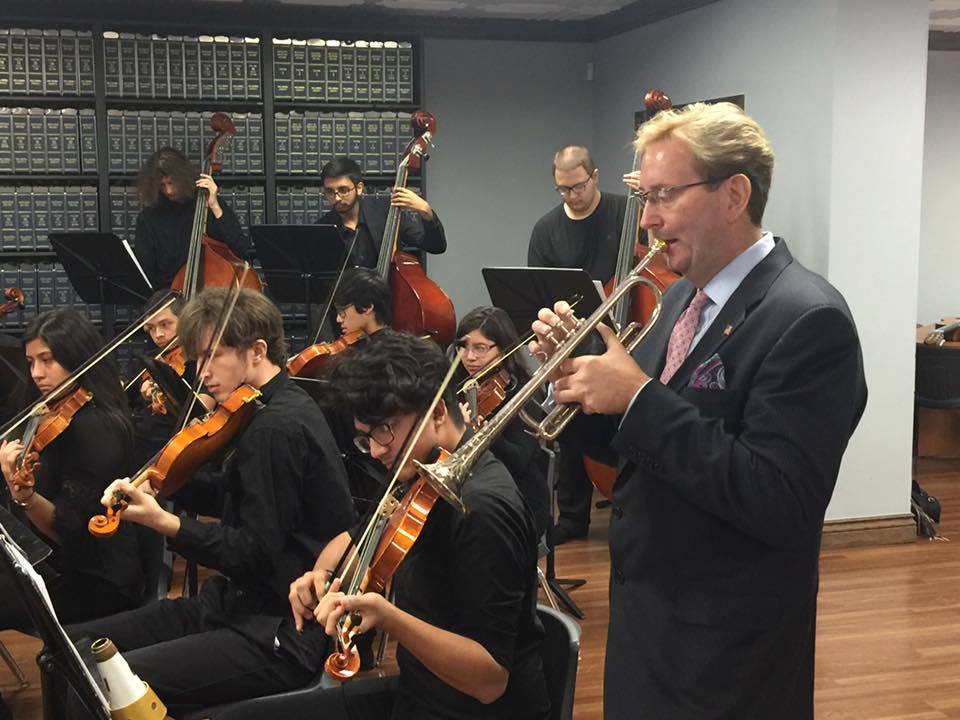 Oklahoma County, Okla. Clerk David Hooten plays the trumpet with students during the Spotlight on the Arts program.

David Hooten is a county clerk in Oklahoma County, Okla. during the day and a world-famous trumpeter on the weekends.

A multi-Grammy and Emmy nominated trumpet player, Hooten has been a professional musician his entire life, producing 22 albums and performing around the world.

“Believe it or not, because of me being known as a trumpet player, everyone answers my phone call,” he said.

Hooten used his same passion and appreciation for music when elected to serve as the Oklahoma County clerk. He spearheaded the County Clerk’s Spotlight on the Arts program to show students throughout the county the connection between the arts and public service.

“That’s kind of the reason I started at all was when I got into office, I wanted to bring what I know and what I care about into focus,” he said.

Through the program, students visit the county courthouse and clerk’s office where they listen to elected officials talk about the basics of civics and county government.

Hooten discusses his background with students and shares his story of how discovering music led to his success as a businessman and elected official.

He tells students about the variety of ways creative people can serve in county government and make positive impacts on people’s lives through public service.

After learning about county government, students hold a fine arts performance on a large floor in front of Hooten’s office. The performances range from dances to full orchestras. If the students are lucky (which they always are), Hooten plays his trumpet alongside them for an impromptu joint performance.

“The Spotlight on the Arts program is really cool for me in that kids get to perform,” he said. “It gives them a venue, a place to perform and honestly get to talk to someone who’s done it for a living for a long time.”

Following the performance, students receive a personalized certification before visiting the Oklahoma City Museum of Art across the street from the clerk’s office for a tour as part of the daylong event.

Hooten said the arts aid in cognitive development for children, when they are allowed to express themselves and show emotion through creative outlets.

“The arts and music are very, very important because it makes children use both sides of their brain,” he said.

The Spotlight on the Arts program uses the arts as a tool to educate young artists about local government and provide them with an opportunity to perform publicly.

Hooten said the program advances the arts for students by having them create and give live performances while simultaneously filling a void in students’ civic education needs because of school funding cutbacks.

Ahead of the visit to the county courthouse, fine arts educators in schools across the county prepare for the performances two to three months ahead of the scheduled visits.

The clerk’s office partners and collaborates with local groups including the Oklahoma City School Foundation, Oklahoma City Public Schools and Junior Achievement, an area non-profit, to transport students to and from schools to the county building and museum.

The collaboration promotes intergovernmental cooperation and connects county officials with school district officials, Hooten said, adding that after the first two years of the program, Oklahoma Public Schools added civics back as an elective for students.

Hooten also spearheaded the creation of the Youth in Government program to address the lack of civics classes in schools throughout the county. The program is like the Spotlight on the Arts program and provides students with a civics lesson before they visit the museum without the performance aspect.

“[These programs] changed the outcome of what’s going on in our public schools and that is really the jewel to all of this,” he said. “If we don’t get involved and be involved in our schools, we’re going to have a real problem.”