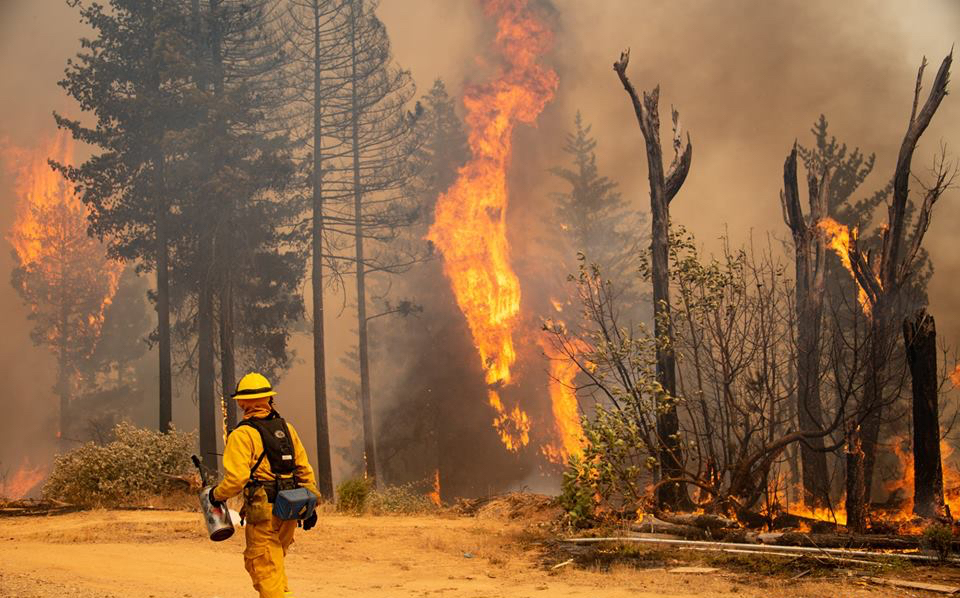 A firefighter watches a backfire set to control the spread of the Mendocino Complex fire. California’s largest wildfire in history has burned more than 366,000 acres so far. Photo by Dave Mills/U.S. Forest Service

In order to filter by the "in queue" property, you need to add the Entityqueue: Queue relationship.
Communicating with public remains top county concern during Mendocino Complex fire

Fueled by triple-digit heat and 30 mph winds, the largest wildfire in California history has challenged local officials as it engulfed more than 366,000 acres over the course of two weeks in Lake, Mendocino and Colusa counties.

The top priority during the Mendocino Complex fire? Communicating with the public, said Carmel Angelo, county executive officer for Mendocino County, which was still in recovery mode from a devastating October 2017 fire when the fires broke out July 27.

“The county has an obligation for the health and safety of the public,” Angelo said. The county alerted residents of evacuations via reverse 911, Wireless Emergency Alerts (WEA) and Nixle (a notification service) and continues to update the public throughout the disaster with posts on Facebook and Twitter.

In neighboring Lake County, “everybody in my district was evacuated,” said Supervisor Jim Steele, who said the county employs the same notification methods as Mendocino County.

The fire got within a half-mile of his home, where his wife sheltered in place watering down their deck, said Steele, a forester by trade.

In remote rural areas, first responders also knocked on doors, Angelo and Steele said. The Sheriff’s Office got help from the police department and Cal Fire (the state department of Forest and Fire Protection) in evacuating residents.

“We rely on technology more and more,” Angelo said. “And social media is great.”

“You also need to understand — that’s as long as your internet is running,” said Mendocino County Supervisor Carre Brown. “Our fire last fall burned down a communication tower…you couldn’t [make a call] but you could text. There are a lot of variables.”

During a fire disaster, Angelo begins her day at about 7 a.m. with a briefing from Cal Fire, and then visits shelters to make sure residents have everything they need. She also makes stops at the Emergency Operations Center and the call center.

Another inter-departmental briefing with Cal Fire is usually scheduled for mid-morning “so we make those connections,” she said. The county human resources director also helps coordinate getting county employees in place to help during the disaster.

Feeding firefighters is another part of the equation during a wildfire. Lake County has a contract with Red Cross, which comes in to feed first responders and others. “There are a lot of moving parts to it — some that go right, some that go wrong,” Steele said.

Two weeks into the fire, Lake County opened a local assistance center as a one-stop shop for victims having trouble with everything from debris removal to replacing a driver’s license to concerns about animals, said Steele. He foresees the county will continue to “mop up” for the next few months as residents recover.

At the end of the day, “you go home, check your calls, check your emails,” Angelo said, “and get up and do it again the next day.”

Every problem during a wildfire can’t be fixed with shelters, donated food or insurance. Wildfires can cripple a county budget and some policies can hamper how a county prepares for the next disaster.

“We’re on the ropes here,” Steele said of the fires that have devastated his community over the past few years. “We’ve lost 5 percent of our housing stock. About 1,900 homes, 50 businesses and a lot of those are tourist industry-style resorts. All of those have been impacted. For this budget, the discretionary side, that’s what drives our quality of life assets here.”

“Definitely the budget is impacted,” Angelo asked. “You have homes that have burned and you have impacts from sales tax, property tax, economic development, which is squelched. How do you bounce back? The biggest thing is getting your community to recover.”

Angelo noted that Mendocino County will look to the state for assistance in the short-term.

“We anticipate the state will help us so we don’t run into a problem with cash flow as we move forward,” she said of her county and other California counties hit by wildfires.

Meanwhile Brown said that another way to get ahead of any future wildfires is to examine policies or legislation that might hamper mitigation and recovery efforts.

“It’s important for counties across the nation,” she said. “Statewide, we’re reexamining our fire suppression, for the safety of our communities, what do we need to do in changing policies or regulations? That means perhaps ‘When can you do fire suppression burning?

Currently, at the California statehouse, a debate is underway between counties and other local governments, utilities, state lawmakers and the governor on wildfire liability policy after Cal Fire determined that Pacific Gas & Electric’s (PG&E) equipment was responsible for at least 16 major fires across Northern California last fall. PG&E is lobbying for a limit to the liability of electric utilities by revising a legal doctrine called “inverse condemnation,” whereby property owners demand payment for their lost property.

Currently, utilities pay for all destruction of private property if their equipment was a cause of a fire.

A plan advanced by Gov. Jerry Brown (D), however, would still allow lawsuits for inverse condemnation, but would require judges to balance the public benefits of the electric infrastructure with the harm caused to private property and would also allow utilities to only pay a portion of damages and not be entirely responsible.

“The proposal will shift liability to communities that are trying to recover,” said Napa County Supervisor Diane Dillon, who testified on behalf of the California State Association of Counties.

While Lake and Mendocino counties did not suffer damage to any county facilities, neighboring Shasta County did see considerable fire damage from the 220,000-acre Carr Fire.

The blaze burned more than 1,000 homes as well as Shasta County’s Keswick Fire Hall and Community Center including the three fire engines inside, according to Pat Minturn, the county’s public works director.

“The fire hall was a substantial metal building, left more or less standing with the burned engines inside,” he noted. The community of Keswick was wiped out, he said. The county provided water service to 209 customers there and “we have eight customers left.” The county also lost approximately $1 million worth of guardrail and signs, Minturn said.

Another wildfire, the Hat Fire, burned several thousand acres in Fall River Mills and swept across the county’s road maintenance yard. No buildings or equipment were lost, however, “thanks to heroic efforts of Cal Fire,” he said. Cal Fire has since occupied portions of that facility and the county’s nearby airport as bases for ongoing fire suppression activities.