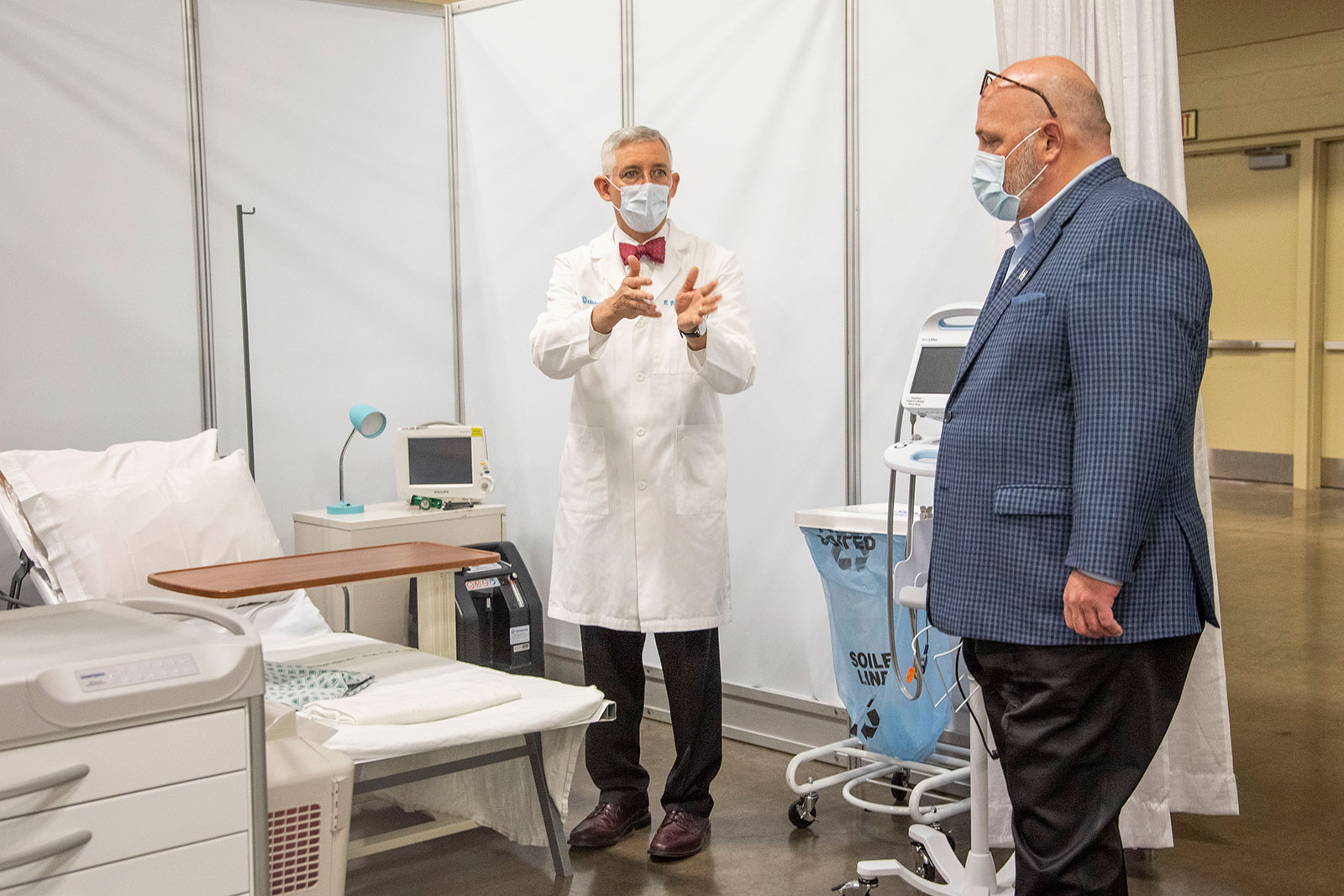 “It’s quite the awakening to see what’s generally a place where people are moving about, laughing, enjoying their experience to a place with hospital beds for people who will be sick and working their way through a very serious virus,” Franklin County Commissioner Kevin Boyce said.

The county is the controlling entity of the convention center, which has been turned into a 1,000-bed overflow surge hospital facility that is cooperatively operated by three hospital systems — the Ohio State University Wexner Medical Center, Mount Carmel and Ohio Health.

Franklin County is investing up to $5 million in the facility as part of a contract with state and local emergency management agencies and the Ohio National Guard.

“We built the Franklin County convention center to host many, many things in its lifetime and the least it could be is a hospital on behalf of the residents of the community,” Franklin County Commissioner John O’Grady said.

Centrally located downtown to all the hospitals in the community, the 375,000-square-foot facility had the space available after the COVID-19 outbreak prevented any large gatherings.

Inside the facility, cubicles separate the open space into small rooms with curtains in the front and patient beds inside.

Meeting rooms have been transformed into break rooms, pharmacies and locker rooms.

The convention center will serve solely as an overflow facility for COVID-19 patients and is not currently being used.

“We’ve got patients going into the hospitals every day,” O’Grady said. “We just haven’t gotten to a point where we need the overflow yet.”

If hospitals are experiencing a surge in patients, Young will activate the facility, which needs 72 hours to become fully operational.

“We built 72 hours for them [the hospital systems] to stock it, get their staff over there and then begin to receive patients,” Young said.

The convention center is providing the utilities, food services and janitorial services as well as sanitation stations and hand washing stations.

The biggest challenges to constructing the surge hospital in only two weeks was bringing in generators and running cabling to support backup power, Young said.

Patients in the county will first visit the main hospitals where they will be registered and triaged before being transferred to the surge facility, Young explained.

Those patients who are too sick to go home but not sick enough to stay in the main hospital will stay at the convention center.

O’Grady said the facility would also be available for patients from surrounding counties.

“It would be great for us to have built this and never see patients,” he said. “That would be fantastic.”

In addition to other larger surge facilities such as the USNS Comfort and USNS Mercy hospital ships and the emergency hospital created at the Javits Center in New York City, counties throughout the country are turning to surge hospitals as back-up options for potential overcapacities in hospital systems.

Similar to Franklin County, San Mateo County, Calif. is working with federal and state partners to establish a field treatment site with up to 250 low-acuity beds at the San Mateo County Event Center.

“The latest projections estimate that a medical surge could push the hospitals in our county to capacity and we’ll need another location to house patients requiring particular levels of care,” County Manager Mike Callagy said in a statement.

“We can’t just wait to see if this will happen.”

Also in California, Gov. Gavin Newsom announced a partnership with the state of California, Los Angeles County, Dignity Health and Kaiser Permanente to establish the Los Angeles Surge Hospital with additional beds and ICU capacity for those seeking medical care.

The facility operates as a referral hospital with the County of Los Angeles’ Department of Health Services working to coordinate intake and transfer requests.

“The point is, in a time like this, it’s just important to do anything on behalf of the residents of your community and it’s not time to point fingers, to blame folks, to squabble over resources,” O’Grady said.