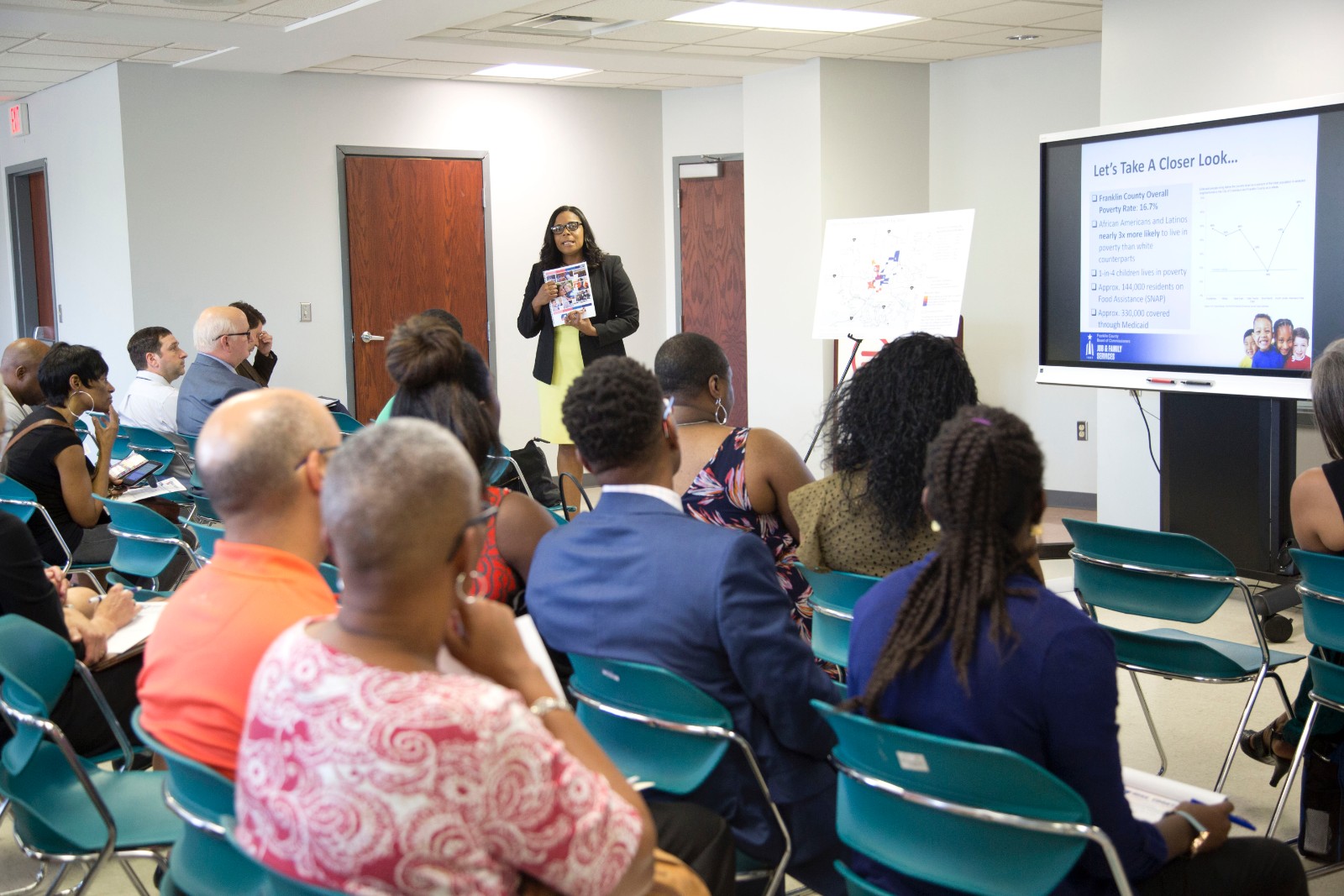 In order to filter by the "in queue" property, you need to add the Entityqueue: Queue relationship.
Franklin County, Ohio is addressing the causes of poverty identified by a diverse group of stakeholders

A blueprint is guiding the future for Franklin County, Ohio, but not to construct new buildings. The Rise Together Blueprint for Reducing Poverty is a plan to lower the county’s poverty rate through setting goals and establishing action steps.

In the fall of 2018, Franklin County commissioners launched an initiative to analyze the causes of poverty in the county. Community leaders formed a steering committee comprised of individuals from different economic backgrounds, including those experiencing poverty, to establish a plan to reduce poverty in the county.

The committee collaborated with commissioners to write the Rise Together Blueprint for Reducing Poverty in Franklin County which includes 13 goals and 120 action steps. The goals and actions steps are based on interviews with 200 county residents who were living in poverty, according to Joy Bivens, director of the county’s Jobs and Family Services.

“Those goals within that plan actually come from the residents in the constituency that our commissioners serve,” she said.

Franklin County Commissioner John O’Grady said Franklin County is expecting to see an increase of one million residents over the next 20 to 30 years. Currently, the county’s population is 1.3 million residents and although the county’s unemployment rate is low at 3.5 percent, the poverty rate is 16.7 percent as defined by 2018 federal poverty level income numbers. This is slightly higher than other counties of comparable sizes, he said.

“We couldn’t continue to be what we thought was a very prosperous county or prosperous into the future if our poverty rate was that high and we needed to do something about it that would be very transformative,” O’Grady said.

With a large number of goals and recommendations listed in the report, county commissioners selected starting points that could be completed, such as raising the minimum wage paid to county employees to at least $15 per hour. According to Bivens, of the 13 goals, the county is currently working to address three.

The first goal focuses on increasing employer engagement in neighborhoods of concentrated poverty through the creation of a living wage and high-paying jobs for residents.

“This was important to residents because the jobs that they saw that were livable wage jobs were not stationed within their neighborhoods,” she said.

Bivens said the second goal relates to increasing access to training for credentials that meet local demands. Additionally, employer commitments are needed to hire and promote members of the community. To reach this goal, the county created Building Futures, a 12-week program where individuals may obtain commercial driver’s licenses and construction licenses.

The third goal is to ensure graduate rates are high for students at or near the poverty level and ensure they are performing well academically to prepare for the future workforce, Bivens said.

The blueprint involves the creation of an Innovation Center, which Franklin County has committed up to $2.5 million in annual funding. O’Grady said the commissioners hope that as the center becomes successful, it will be able to raise money from other partners.

The Columbus business community agreed to partner with the county and is providing office space, matching the county’s dollars and helping with the creation of a 501(c)(3) organization for the center.

O’Grady said the innovation center is a place where big ideas will be vetted and piloted.

Bivens said the innovation center also serves as a place for the blueprint to “live” so it doesn’t become a report “sitting on the shelf.”

“The idea of an innovation center came up and its goal is basically like [the TV program] ‘Shark Tank.’ If policy wasn’t an issue and money wasn’t a factor, what big idea could we test that could really move people up the economic mobility ladder?” she said.

Bivens said the business community wanted to make sure they were involved with the blueprint, adding that businesses play a significant role in establishing livable wages. The business community is working to develop a technology platform where jobs are posted online and young people can apply by working with the school district. “The commissioners wanted to make sure that every system was touched and included on what role they play in assisting people moving up that economic mobility ladder,” Bivens said.

She said she thinks collectively, all 13 goals and 120 action steps will work together to reduce poverty in Franklin County.

“This plan is not a silver bullet or a kryptonite against poverty,” she said. “It is an opportunity for us to collectively work together on these goals and moving the metrics and then that way we will see some of our successes.”

O’Grady said the blueprint is not Franklin County’s “cure” for poverty, but said he hopes the plan gives people the opportunity to find a path to mobility.

“I think there’s a lot of people in this community who are excited by this work and are very interested in where we’re headed,” he said.