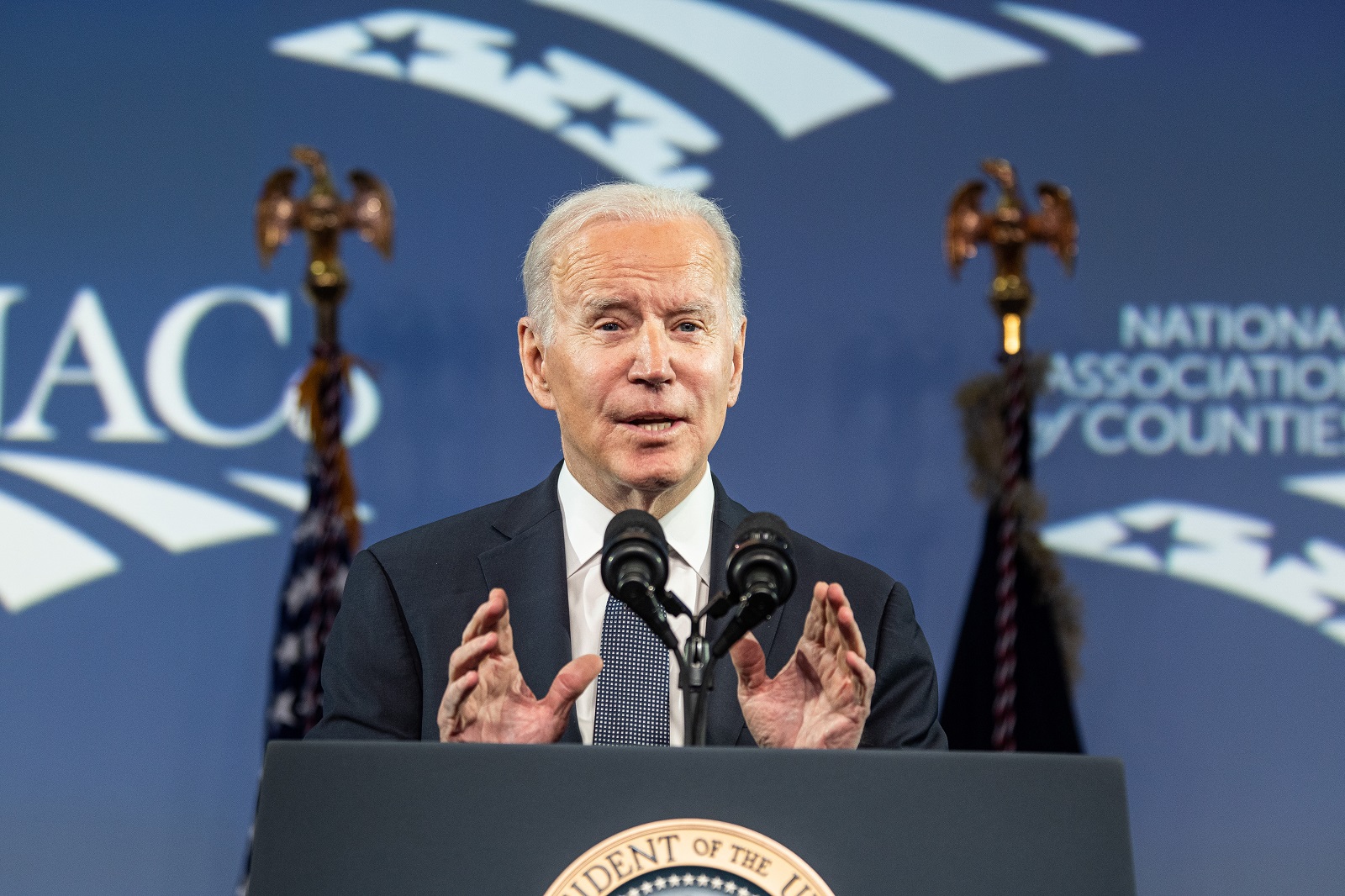 With the American Rescue Plan in one hand and the Infrastructure Investment and Jobs Act in the other, President Joe Biden came home to kindred spirits from the start of his political career, when he was a New Castle County, Del. Council member.

“I promise I’ll always have you as a partner with us,” Biden said. “The partnership was critical,” he said, in crafting the American Rescue Plan’s regulation delivering funding to every county in the country and in helping pass the bipartisan infrastructure law. Both, he said, will have lasting consequences for counties and the nation as a whole.

“We made sure that $65.1 billion of that went straight to the counties,” he said. “I know how much it matters, it really matters, giving you the ability, the flexibility, the control to meet both the short-term and long-term challenges you face.”

Biden served as a New Castle County Council member from 1971-1973 until he took office in the U.S. Senate.

He urged county leaders to use both pieces of legislation at the same time to achieve better outcomes.

“You don’t have to wait until the project starts, you can use the resources from the American Rescue Plan now,” he said, referring to extra spending flexibility awarded to counties by the legislation’s Final Rule for implementation. “You’re going to need welders, pipe fitters, advanced manufacturers ready to take on those [infrastructure] jobs and it takes training to do those jobs well. Start by building pathways to better jobs. Like Maricopa County in Arizona, where they’re using American Rescue Plan funds to help young workers develop in-demand technical skills. They know what the county is going to need.”

He tracked the progress the United States has made in vaccinating the population against COVID-19 and stressed his belief that the challenges Americans have faced and solutions they forged will all lead to a step forward for the country.

“We’re the only country in the world that whatever crisis we’ve gone through, we’ve ended up on the other side better off than where we were before we had the crisis,” he said.

“We are the United States of America,” he said. “There’s nothing, I mean this from the bottom of my heart, there’s nothing beyond our capacity. There's nothing we cannot do if we do it together. It’s always been who we are.”

While he noted several indicators’ reports that the economy was making a rapid comeback from the pandemic-influenced recession, Biden stressed the need to make sure all Americans have the chance to advance and thrive economically, which he said his proposed Build Back Better legislation — which stalled in the Senate in 2021 — would enable.

“Families are getting clobbered at the cost of everyday things,” including childcare, automobiles, prescription drugs, gasoline and other consumer goods, he said. “I'm going to work like the devil to bring gas prices down. We’re going to keep working to strengthen the supply chain and bring the cost of every good down, particularly food and automobiles.”

For many families, the precarious balance they once maintained was no longer viable with new situations for their family members.

“We have a so-called ‘sandwich generation,’ and if you are part of it,” he said, “you’re trying to take care of your children, while taking care of your aging mom or dad. We can help make it work.”

Although he criticized the prices charged by pharmaceutical companies and suggested they could be successful with price controls, he told the audience he was a proud capitalist.

“I think you should be able to go out and make a million or a billion dollars given the capability. But just pay [taxes], a little bit.”

The revenue from the various funding mechanisms in Build Back Better, he said, would go to programs that would ultimately make higher corporate tax rates moot.

“When middle-class folks do well, there’s never been a time the wealthy don’t do very, very well, he said.

But the most crucial link Biden made between county governments and the future of the republic came not from any funding proposals or federal programs. It was from his anecdotes about serving in local office, where he was a phone call or an encounter in a grocery store away from the public. That credibility, he said, will perpetuate people’s faith in representative government.

“You’re there, representing the frontlines of public service, that’s not hyperbole,” he said. “We need your voices of county officials, helping us folks understand what our communities need.”