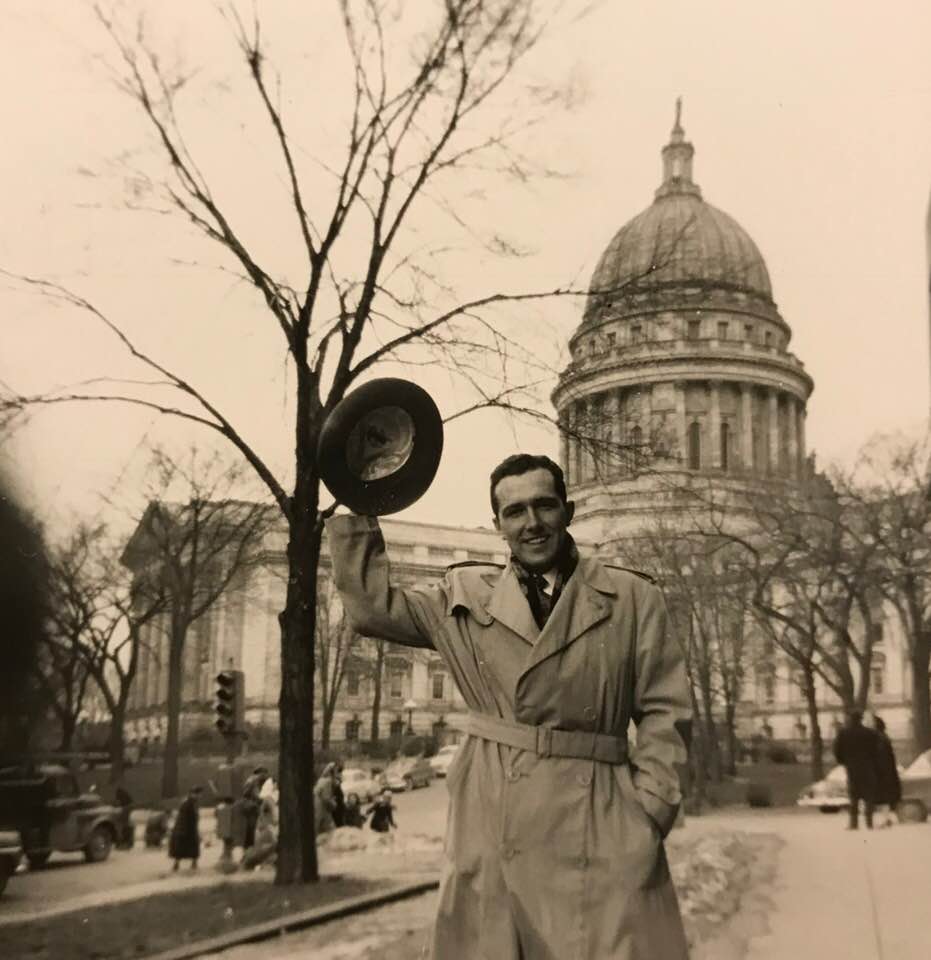 Bernie Hillenbrand stands in front of the Wisconsin state capitol in this undated family photo.

Working out of an unused laundry facility and taking meetings in Washington, D.C.’s Mayflower Hotel, Bernard “Bernie” Hillenbrand took charge of NACo as its first full-time executive director in 1957.

Over the next 25 years, his vision and personality led the organization to change the way counties were represented on the federal level. After retiring in 1982, Hillenbrand retired to pursue the Methodist ministry. He died Oct. 5 at the age of 93 after a brief illness.

“In 1957, county governments had no presence in Washington, D.C.,” said Larry Naake, NACo’s former executive director who first met Hillenbrand as a California State Association of Counties intern in the 1960s. “By the ’70s, we were included in the discussions with governors and mayors, and that was all due to the way he built the organization.”

In fact, the New York Times called him, in 1981, “the lobbyist who put counties back on the map of politics.”

Watch a recording of Bernie's celebration of life service

That building process capitalized on the enormous support county elected officials could muster for causes like revenue sharing, funding for federally-managed land and the battle against unfunded mandates. But beyond that, Hillenbrand saw a great value in the NACo’s potential to improve county operations and the savvy of county officials, all contributing to help counties emerge from an enduring reputation as being home to political boss rule and a lack of professionalism.

Years later, in an interview with County News, Hillenbrand said NACo became “a place where county leaders can get together, talk about the problems they are facing and find solutions,” he said in June 2018. “There’s a comradeship you can’t get anywhere else, and bonding, seeing the same people every year at our meetings. People would look forward to next year.”

“He was passionate and he was hilarious and he was a phenomenal storyteller until the day he died,” said NACo Executive Director Matt Chase, who succeeded Hillenbrand’s late wife, Aliceann Wohlbruck at the National Association of Development Organizations. “His passion for the public sector showed in the way he would tell the stories that advanced county interests.”

Born in Syracuse, Hillenbrand joined the Army at 18 and fought in the European theater. He was wounded twice by German mortars in the Battle of Hürtgen Forest and spent a year and a half recovering before joining the Merchant Marines. He then earned masters degrees in public administration Syracuse University and theology from Wesley Theological Seminary.

“He was a scrapper, and his youth in poverty was a big part of his story,” Chase said. “After the war, he decided he was going to live his life with no regrets and he put 100 percent into whatever he was going to do because he knew the alternatives. He had a hunger.”

While working as assistant director of the American Municipal Association, he initially turned down the NACo job, but he saw counties’ emerging influence and when a second offer came around, he accepted.

He developed an appreciation for counties’ rising importance while working for the mayor of Syracuse, after noting how many functions of local government ultimately involved the county.

Hillenbrand’s tenure at NACo stressed the power of relationships, Naake said, and Hillenbrand said that extended to the staff.

In 2016, he recounted how annual three-day-long planning meetings at his Washington County, Md. farm included every staff member.

“We would go through what was working and what needed to change, and the opinion of a secretary meant as much as the opinion of a lobbyist, everything we said was equal” he said. “We were a family.”

He was proud of NACo’s inclusiveness, particular its distinction in electing the first Japanese-American man and African American woman to lead a national political organization.

Hillenbrand retired from NACo in 1982 and served as a Methodist minister until the compulsory retirement age of 70. Hillenbrand lived in Washington, D.C. and raised three daughters, a son and two stepsons.

Even into his mid 90s, Hillenbrand rode six miles a day on a stationary bicycle in his apartment, which included his original desk from the laundry room in the ’50s.