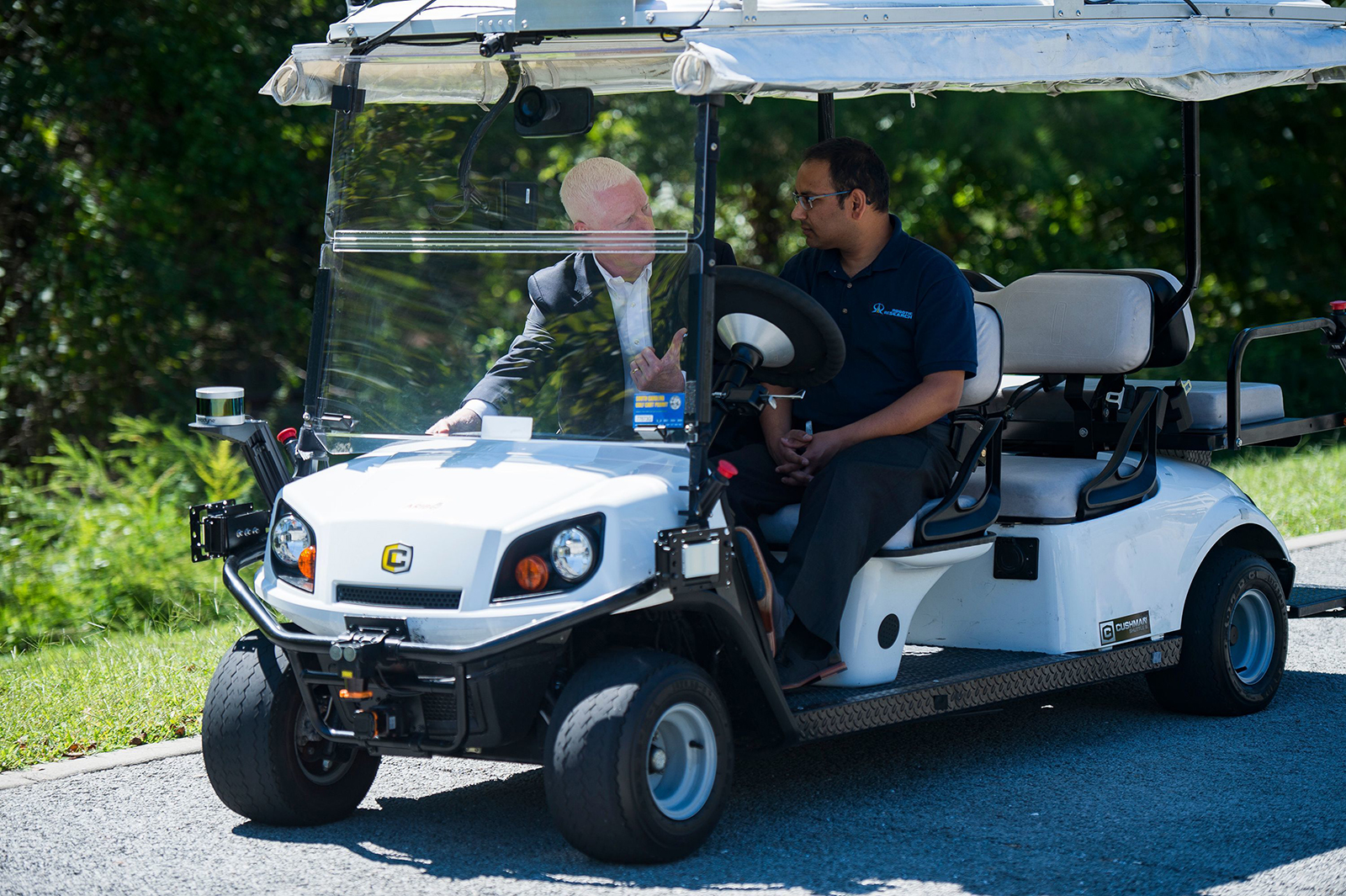 In theory, autonomous cars are safer. They aren’t operated by distracted, impaired or inexperienced drivers and follow hard and fast rules of the road.

But they won’t exist in a vacuum. How computer-driven cars will fare when mixed in with living drivers is a wild card, and Greenville County, South Carolina will have a front row seat, thanks to a federal grant to introduce autonomous cars onto its roads.

County Councilman Fred Payne is hoping that using them as automated taxis in three different environments will offer some transportation options to his county and provide valuable data back to developers.

“The technology is proven, but we don’t know what human behavior is going to be,” he said. “We don’t know if there will be acceptance of the vehicles, respect for the vehicles.”

Experts say drivers will either ignore the cars, overact and avoid them or test them to see how they will react when challenged.

“They’re all logical, predictable reactions, but we don’t know what the percentages are. We’ll find that out in a real-world environment.”

A $4 million Federal Highway Administration grant will help build out a taxi shuttle system, starting at the Clemson University International Center for Automotive Research and then spreading into two test communities. That $4 million will be matched by $2 million from the nonprofit Global Autonomous Vehicle Partnership and $1 million from the developer behind a planned community where the taxis will operate to build a multimodal transit center.

“We would have done this without federal money but it would have been much slower,” Payne said. “This is a solution that could solve a lot of first-mile-last-mile problems and help people move away from owning cars.”

After federal funding put Greenville County’s bus system in jeopardy in 2007, Payne decided the county needed to move away from buses, which eventually directed him to autonmous vehicles.

The first autonomous vehicle, resembling a “stretch golf cart” will seat six passengers and cruise the streets of the university’s research campus, albeit with a backup driver. These kinds of vehicles had been in use at Fort Bragg in North Carolina to transport wounded veterans, where the technology was initially tested and refined in a controlled environment.

“The vehicles themselves are worth about $10,000, but the information they’ll collect on those instruments will be worth much more,” Payne said. “Most riders won’t appreciate the brain inside these things. It will gather data that will play a major role in how autonomous vehicle technology goes forward in this country.”

Later, the vehicles will be replaced by climate-controlled shuttles capable of carrying up to 14 passengers and will be deployed in a high-end mixed-use neighborhood and later, a low-income residential area.

“We’re doing this on public roads, not on a special routeway that’s just dedicated to that, or in a parking lot or in a theme park,” Payne said.

The taxis will run on demand, summoned by an app, and there will be a fee to use them.

“We want to show there’s a viable businesses case for this service,” Payne said. “It will be like calling an Uber or a Lyft.”

That said, eventually the taxis will be operating without a failsafe driver, and the costs will decrease. Reduced costs leads Payne to an application for which he sees an immediate improvement in operation.

“An ambulance substitute in non-life-threatening situations,” he said. “For people who don’t have a car, need to see a doctor but really don’t need to be calling an ambulance, which costs $450 to drive out of the parking area and use for an hour.”

Non-emergency ambulance dispatches are not reimbursed, and Payne said Greenville County writes of $2 million annually in that manner.

“Emergency dispatchers triage the situations already when they take calls, but we have to respond. We could, someday, respond by saying an automated taxi will be by to take you to the clinic, not the emergency room.”

Payne said that the vehicles will also serve as reinforcement for safe driving practices.

“They won’t go faster than the speed limit, and in a lot of places you have cars going 50 miles per hour in a 30 mile-per-hour zone. Other drivers will see how much faster they’re going,” he said.

Initial operations used a driver with the automated system running in the background, comparing the driver’s performance to its programming.

“The cars know that a stop sign means a 100 percent stop,” Payne said. “If a driver does a rolling stop, the computer knows that wasn’t all right and lets the driver know he failed there.”

The vehicles are already learning and providing data for programmers. Payne is amused by one of the unintended speedbumps they’ve hit while driving on the Clemson research park campus.

“The vehicles are programmed to look out for pedestrians, because they’ll be on the sidewalks and they can step out into the road,” he said. “They were stopping on the campus because instead of planting grass, the campus has these tall shrubs, kind of like sea oats.

“They wave in the wind, they’re about 4-to-6 feet tall, and they finally figured out that the car thinks they’re people, and they’re about to step into the road. It’s wondering what to make of it.”