The Road Ahead: County Transportation Funding and Financing 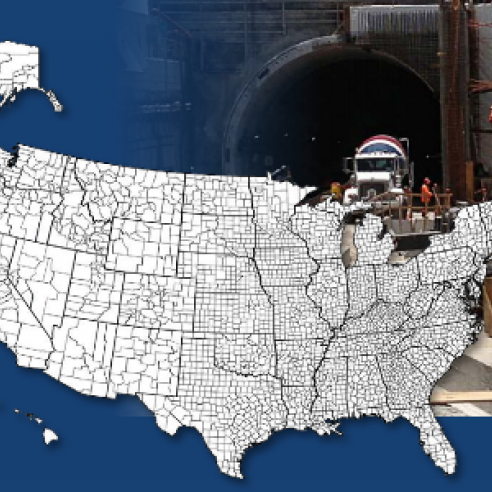 Counties are an essential part of the nation's transportation system. They are responsible for building and maintaining 45% of the public roads, 230,690 bridges and are involved in a third of the nation's transit and airport systems that connect residents, businesses and communities. The impending expiration of the federal surface transportation funding law, Moving Ahead for Progress in the 21st Century Act (MAP-21), presents an opportunity for counties to discuss their role in the national transportation network.

Click here for video coverage of NACo's Transportation Rally during the Legislative Conference.

An analysis of county transportation (roads and bridges only) funding sources, challenges and solutions across the 48 states with county governments shows that:

Based on Federal Highway Administration (FHA) data, the share of federal and state funding to local governments for highways decreased by 10% between 1998-2011. The latest federal surface transportation law (MAP-21) further skewed the allocation of funds away from local governments. While local governments own 43% of the federal-aid highways system, local areas receive a suballocation that is equal to 16% of the MAP-21 National Highway Performance Program (NHPP) and the Surface Transportation Program (STP) funding for federal-aid highways. A combination of federal budget cuts, the effect of the recession on state governments and the fixed gas tax nature of state and federal highway funding are contributing to a widening gap in transportation funding available to counties.

​​Counties face the dilemma of rising costs of transportation projects, increasing traffic volumes and limitations on their ability to generate revenue.

The cost of construction and materials increased by 44% between 2000-2013, more than the 35% rise in the overall rate of inflation. Among other factors, regulatory costs contributed to this trend, as shown by California counties. Fast-changing economic environments put pressure on county transportation systems, especially in states with rapidly expanding oil and gas industries. At the same time, most states limit counties' ability to raise revenue. Forty-three (43) states have some type of limitation on the property taxes collected by counties, including 38 states that impose statutory limitations on property tax rate, property tax assessments, or both. Only 12 states authorize counties to collect their own local gas taxes, which are limited to a maximum rate in most cases and often involve additional approvals for implementation.

Counties have adopted additional funding and financing mechanisms, but they are not sufficient to cover the needs of their businesses and residents.

Counties increasingly use local-option sales taxes to fund transportation projects, if allowed under state law. Twenty-nine (29) states allow counties to collect local-option sales tax for transportation purposes or general purposes including transportation. Over the years, county residents in 15 states voted for local-option sales taxes for road and capital projects. In addition, partnerships with state and local governments allowed counties in Pennsylvania and Ohio to pool resources and materials to save money on transportation projects. Counties in states such as Iowa, Missouri and Nevada implemented land-value capture options such as tax increment financing, special assessment districts and development impact fees, linking transportation investments to the economic growth in their counties. For large and complicated capital projects, counties partnered with the private sector in Public-Private Partnerships (PPPs) such as Miami-Dade County's Port of Miami tunnel project.

Click below for an interactive map and individual state profiles.