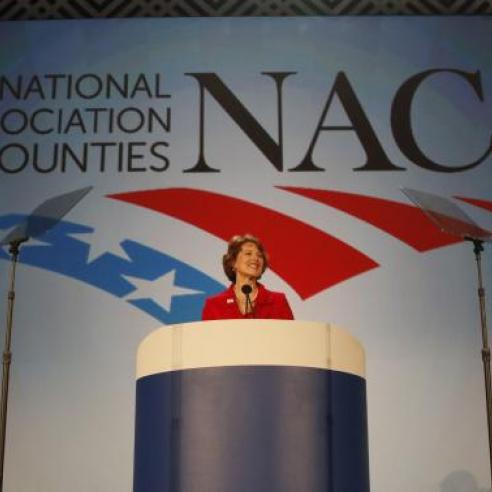 Charlotte, N.C. – Commissioner Sallie Clark, El Paso County, Colo., today was sworn in as president of the National Association of Counties (NACo).  The ceremony took place on the final day of NACo’s 80th Annual Conference held in Mecklenburg County (Charlotte), N.C.  Clark is the first commissioner from Colorado to hold the position.

“I am honored to serve as NACo’s president, and I look forward to working with county leaders across the country to build healthier, more vibrant, safer communities,” said Clark.

“Today, we enter a new phase of promise.  A new phase of growth and outreach efforts because we know that stronger counties make a stronger America,” said Clark during her acceptance speech.

During her address to conference delegates, Clark announced her presidential initiative to strengthen many of the fundamental programs and services America’s counties provide.  Her Safe and Secure Counties initiative is designed to enhance counties’ capacity to protect public safety, support public health and human services, maintain roads and bridges and build local economies.

“Over the last few years, my county experienced two catastrophic wildfires followed by disastrous flooding, resulting in loss of life and long-term recovery costs,” said Clark.  “When disasters strike, counties are the boots on the ground, before, during and after emergencies.  Regardless of where you live, safety and security are at the core of county government.”

Counties play an essential role in America’s public safety, investing $70 billion per year in the justice system, law enforcement and crime prevention and another $70 billion in health services.

Counties also have a significant stake in strengthening the safety and integrity of America’s transportation systems.  Counties are responsible for building and maintaining 45 percent of the nation’s roads, 40 percent of bridges and a third of the nation’s transit systems and airports.

Economic development is directly linked to counties’ ability to preserve public safety and well-being.  Counties invest $25 billion annually in economic development efforts to help residents obtain the skills they need to compete in the global marketplace.

“NACo will continue to advocate for federal policies that advance the interests of county government and our residents,” said Clark.  “Whether fighting unfunded mandates or securing needed investments in critical county services, NACo is the voice for county government in our nation’s capital.”

Clark was elected to serve as an El Paso County commissioner in 2004 and was re-elected in 2008 and 2012.  She has served as chair and vice chair of the commission.  Clark has won numerous awards for excellence in public and community service and has served in many state and local leadership positions with groups including the Colorado Commission on Criminal Justice, the Colorado Child Welfare Allocation Committee and the Waldo Canyon Fire Recovery Group.