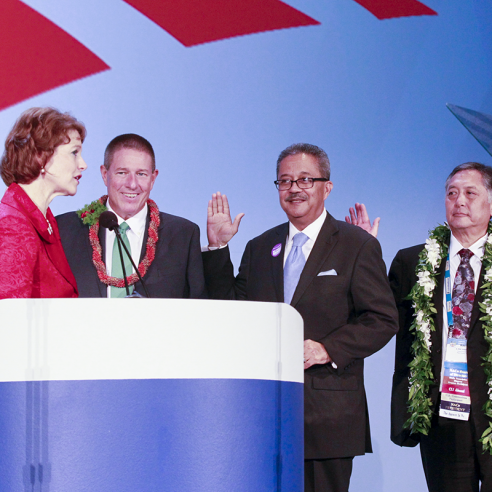 Shortly after his election, Brooks discussed his vision for the association and his ability to build consensus to achieve results.  “Whether the issues are infrastructure and transportation, criminal justice reform, health care or public lands policies, we need a reliable federal partner,” said Brooks.  “I will reach across the political divide, the geographic divide and the demographic divide, which puts us in little boxes in this nation, to form lasting coalitions that will strengthen our counties, add value to our constituents and secure the local safety net.”

Brooks has been active in NACo since 1991.  He most recently served as chair of NACo’s Large Urban County Caucus (LUCC), which works to address the challenges facing the nation’s 100 largest counties.

As chair, Brooks established collaboration between LUCC and NACo’s Rural Action Caucus to advocate for federal policies that impact urban and rural counties.  In May, the two caucuses united in the nation’s capital to urge Congress to pass a multi-year surface transportation reauthorization bill and adopt a long-term solution for the Highway Trust Fund.

“I look forward to continuing to work closely with leaders from the nation’s 3,069 counties,” said Brooks.  “Together, we will strengthen America by strengthening America’s counties.”

In addition to his chairmanship of LUCC, Brooks has served on NACo’s Board of Directors, chaired NACo’s Health Steering Committee Subcommittee on Health Reform and chaired NACo’s Healthy Counties Initiative Advisory Board.  He is the chairman of the National Organization of Black County Officials.

For more than 30 years, Brooks has represented his community, as a volunteer, an elected city official and a county commissioner.  He was first elected to the Tarrant County Board of Commissioners in 2004, and has dedicated himself to addressing human services issues.

Brooks is a committed husband and father and is married to Dr. Jennifer Giddings Brooks, President and CEO of Brooks and Associates Educational Consultants.  They are the proud parents of two adult children.