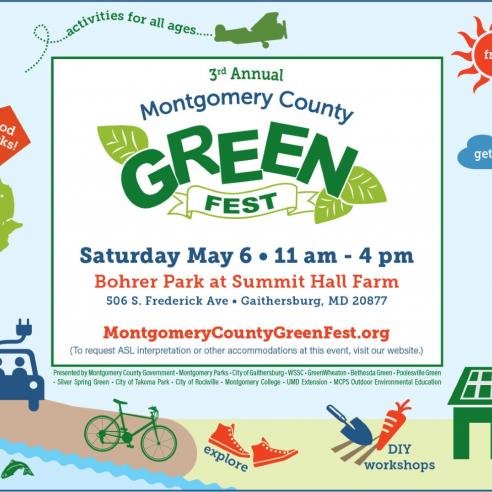 The Department of Environmental Protection (MCDEP), in partnership with 13 groups including public agencies and nonprofit organizations, developed a new signature event for Montgomery County focused on the environment. The Montgomery County GreenFest (GreenFest) is an annual spring event with the goal of celebrating the green achievements of the County and its residents, as well as, providing both awareness of existing issues and the tools for residents to act and make positive change for the environment. Two GreenFests have been held, in 2015 and 2016, and the 3rd annual event is scheduled for May 6, 2017. Activities at GreenFest have included: • Speakers, panels and do-it-yourself workshops ranging from green investing to raising backyard chickens • Keynote speakers including former EPA Administrator Gina McCarthy and U.S. Fish and Wildlife Director Dan Ashe • A partnership with the Environmental Film Festival in the Nation’s Capital to screen documentary films related to the environment • Exhibitors and vendors of more than 100 businesses and non-profit organizations • Kids activities, music, art and dancing themed on the environment and community GreenFest was estimated to have more than 700 attendees in 2015 and 1,200 attendees in 2016, a 71% increase in the second year. Admission to the event is free. Along with being successful at engaging the public and bringing recognition to environmental achievements in the County, GreenFest also provided the opportunity for MCDEP to support a public-private partnership and further the County’s relationship