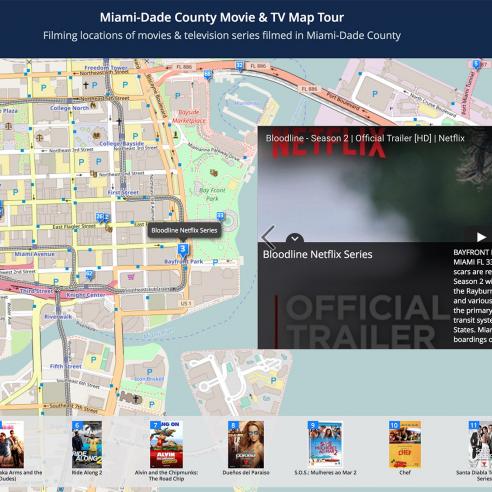 The Miami-Dade County Office of Film and Entertainment through its brand Filmiami.org, offers location and logistics assistance, government liaison, production information and referral sources to the film, television and photo production industry. The office also issues film/photo permits to film and television productions that utilize Miami-Dade County properties. The film industry has a long history in Miami and it continues to grow as the entertainment sector expands throughout Florida. Miami is home to one of the largest production and distribution centers in the world for the film, television, commercial advertising, still photo, music and new media industries. Miami-Dade County, the largest County in the state of Florida based on population size, is a popular filming location for its diversity of landscapes and infrastructure, beautiful natural light and talented crew base. Miami-Dade County has thirty-four municipalities plus the unincorporated areas that have served as a backdrop to some of the best known feature films and television series. Office of Film and Entertainment launched its Miami-Dade County Movie & TV Map Tour in October 2016 to highlight some of these locations used in some of the most well-known movies that have filmed in the area. Movies like Moonlight, Ride Along, Bad Boys and Scarface and television series like Bloodline, Burn Notice and Miami Vice. The map was created for tourists, cinephiles and filmmakers to promote Miami-Dade County and the entertainment productions that have been filmed locally. Since the launch of The Movie & TV Map Tour in October 2016, there have been 2,117 page views and 1,677 unique page views on its www.miamidade.gov/movietvmap web page. Advertisements with Quick Response (QR) codes for smart phone users have been installed on 800 Miami-Dade County MetroBus and all of its 23 MetroRail train stations.