U.S. District Court of North Dakota Chief Judge Ralph Erickson granted a preliminary injunction, citing the harm states would likely incur by the rule's planned implementation on Aug. 28.  It is unclear at this point whether the order granting the temporary injunction applies only to the 13 states or nationwide. 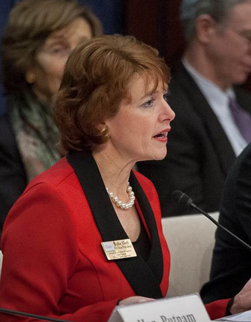 NACo President Sallie Clark testifies on the "Waters of the U.S." before a bicameral congressional hearing.

NACo is seeking more information on the ruling’s implications, particularly for counties outside of the 13 states that sought the preliminary injunction.  Judge Erickson could clarify the scope of the ruling as early as the end of this week.  Currently, the EPA is arguing that the preliminary injunction only applies to the 13 states involved in the case, while others believe the federal ruling applies nationally.

"As the rule goes through the judicial process, we will continue to work with the federal agencies to clarify the regulation and implementation process," said NACo President Sallie Clark.  "All of us want clean water, and we must work together to achieve that goal without compromising our public safety and infrastructure responsibilities."

Counties are responsible for many types of infrastructure that can be impacted by the rule, including roadside ditches, stormwater drains, flood control channels and other systems designed to keep water away from people and property.  Counties own and maintain 45 percent of the nation’s road miles and one out of every 10 bridges.  Counties and other local governments are also charged with upholding federal, state and local regulations that protect water resources.

"This has always been an issue of practicality for us.  We hope the EPA and the Corps will work collaboratively to provide more precise guidance that will help us protect water and keep our residents safe," said Clark.  "However, we also believe in the appropriate level of state and local control."

Since the agencies unveiled the proposal in 2014, NACo testified before congressional bodies four times and has steadfastly advocated for more collaboration and greater clarity.