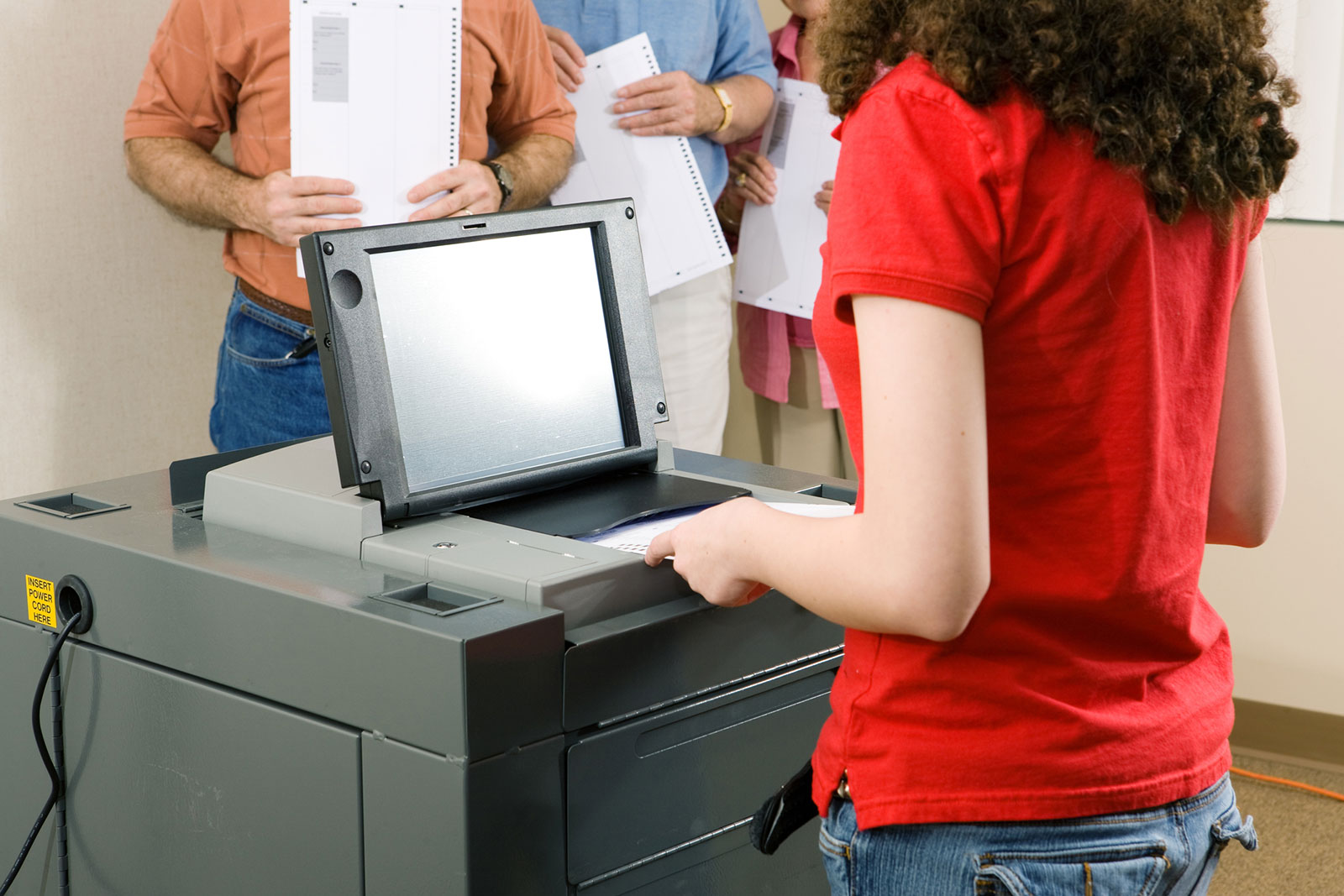 The unprecedented nature of COVID-19 has fundamentally altered the landscape of the 2020 election cycle, with more voters opting to cast ballots by mail. America’s 3,069 counties, parishes and boroughs are instrumental in every federal, state and local election – providing key funding, overseeing polling places and coordinating poll workers.

Early voting trends for the 2020 general election have surpassed records. By Nov. 2, 66.3 million people had cast their ballots for the 2020 election, with 67 percent using mail ballots and 33 percent voting in person before Election Day. With a record high number of individuals voting by mail this year, and mail ballots taking longer to count than ballots at polling places, it was projected that we may not know who won the presidential election on election night.

Each state has its own rules for how votes are counted and reported, meaning some will report results sooner than others. Prior to the election, most states announced that they would begin processing absentee ballots in some form before Election Day, which would help avoid delays in reporting results. However, in several critical battleground states, elections officials are not allowed to start processing early ballots until on or just before Election Day itself.

Since Election Day, a spotlight has fallen on counties in several states – Georgia, Arizona, Pennsylvania, Nevada, Wisconsin and Michigan – that are working diligently and tirelessly to process and count ballots to execute a fair, secure and accurate election. Included below is an overview of each county’s elections administration process and role in the 2020 election.

Fulton County, Ga. has taken on a critical role in the presidential election as the largest county in Georgia, encompassing the city of Atlanta. As of Wednesday morning, the most ballots remaining uncounted in the state were from Fulton County, which allowed former Vice President Joe Biden to begin closing his trail behind President Donald Trump. Most polling places in Georgia were closed at 7 p.m. local time on Election Day, with the exception of cities with a population of 300,000 or more where polls remained open until 8 p.m. for municipal general elections. A small number of polling sites in Fulton County remained open late on Tuesday by rule of a Superior Court judge.

Fulton County has been processing over 508,000 ballots, 42,400 of which are absentee. Results from the county have been trickling in since election day, impacted by a few factors including a broken pipe at a key counting facility. The final, although unofficial, count is expected by Friday. President Trump’s lawsuit in Chatham County, Ga., which was dismissed Thursday morning by a county judge, had little impact in Fulton.

Clayton County, Ga., a locality of the Atlanta metro area and home to one of the world’s busiest airports, is considered a Democratic stronghold and an influential county in the election. The county has processed 110,497 votes, and the vast majority of the votes that have continued to be counted since Election Day have been regular absentee ballots. Around 4:30 a.m. ET on Friday, it was a batch of absentee ballots from Clayton County that gave former Vice President Biden the lead in the state of Georgia.

DeKalb County, Ga. is one of the largest counties in the battleground state where 16 electoral votes are at stake. As of early Thursday morning, all 369,948 ballots casted in DeKalb County have been processed, including 127,019 absentee ballots and 195,376 early votes. The county has already submitted the unofficial tally to the state, though the votes will not be certified by the county Board of Registrations and Elections until Friday, Nov. 13. There is currently no ongoing election-related lawsuit in DeKalb County.

Maricopa County, Ariz., home to the state capital of Phoenix, is an influential locality as the largest county in Arizona and the fourth most populous in the country. Polls throughout the state closed at 7 p.m. MT on Tuesday night and ballot counts have been slowly released with updates expected from the Maricopa County Elections Department on Thursday evening. The county has been processing 1,792,313 ballots amidst significant public attention and scrutiny. Significant demonstrations have also taken place in Maricopa County, with over 300 individuals gathering outside the county counting facility on Wednesday night.

Allegheny County, Pa., the second most populous county in Pennsylvania, will be crucial in determining whether former Vice President Biden has won the state and with it, the election. As of Friday, counting is ongoing in Pennsylvania. While President Trump led the state on election night, mail-in ballots have leaned heavily Democratic. On Wednesday, Allegheny County officials shared that about 90 percent of mail ballots had been scanned and counted. In total, the county reported 313,072 mail ballots and 675,928 ballots overall.

As of Friday morning, there are around 35,000 outstanding ballots. According to the county, the majority of these ballots – about 29,000 – are from voters who received incorrect ballots last month before later receiving the correct ballot. The remaining 6,800 ballots had issues being scanned, were missing dates or had an illegible voter declaration. By federal order, the 29,000 ballots from voters who received the incorrect ballot cannot be counted until 5 p.m. ET on Friday. The remaining ballots are expected to be counted at 9 a.m. ET on Friday. Election workers – who have been working nearly around the clock – are using Thursday to prepare and set up equipment for continued counting on Friday.

On Wednesday, a Pennsylvania state court rejected a legal complaint brought by Republicans in Philadelphia County that they were not given a good enough chance to observe the opening and sorting of ballots. The judge nevertheless allowed observers to get closer to the canvassing tables, so long as they are in compliance with coronavirus safety protocols.

Clark County, Nev., as the largest county in Nevada and representing 70 percent of the total vote statewide, continues to play an important role in completing an accurate vote count in an increasingly tight race for Nevada’s 6 electoral votes. On Election Day, Clark County extended in-person voting hours at several poll locations to 8 p.m. PT due to technical issues early that morning.  As of Wednesday, all in-person early and election day votes have been counted in the county, in addition to all mail-in ballots arriving by Nov. 2. Votes now left to count include all mail-in ballots received on or after Nov. 3 and provisional ballots.

On Nov. 3, the Nevada Supreme Court denied a Trump campaign and Nevada Republican Party motion requesting to stop processing mail-in ballots. On Thursday morning, Clark County Registrar of Voters Joe Gloria reported a known total of 63,262 ballots still to be counted, which is expected to take through Nov. 7 or 8 to complete. As Nevada sent mail-in ballots to all registered voters this election, an exact total of any additional mail ballots still expected is uncertain. Clark County is planning to count received mail votes, postmarked through Nov. 3, until Nov. 12.

Dane County, Wis., the second largest county in the state, had a record turnout in this year’s election, setting the stage for it to play a crucial role in the outcome for the battleground state. Compared to other Wisconsin counties, Dane County saw 390,887 registered voters. Despite not being able to process absentee ballots until Election Day, Dane County was hard at work this week with all precincts reporting on Tuesday night and 98 percent of the county’s total ballots counted as of Thursday. Eighty percent of the county’s voting-age population voted in a record turnout for the county.

After the news was announced that former Vice President Biden won Wisconsin, President Trump’s campaign announced its request to recount ballots in the state. Wisconsin does not have automatic recounts, but under state laws, a losing candidate can request one if the outcome is within 1 percentage point. In the state, recounts are conducted at the county level, which are already preparing for a recount despite total votes being very accurate.

Milwaukee County, Wis., the largest county in the state of Wisconsin, saw an 84 percent voter turnout for the 2020 presidential election, surpassing the approximately 80 percent voter turnout seen in the 2016 presidential election. As of Wednesday, casted ballots represented all 478 wards in the county and displayed a majority vote of 69.13 percent for former Vice President Biden.

Under state law, Milwaukee County was not allowed to start counting mail in votes until the day of the election. Of the 19 municipalities that make up Milwaukee County, 11 municipalities process ballots at their respective polling locations while the remaining 8 municipalities process their absentee ballots at a central location. Presidential election results, however, are not considered complete until reporting of all ballots including ballots processed at central count locations are received. Completed counts from the central count locations came in during the early morning hours of Nov. 4 resulting in a jump in votes for former Vice President Biden and sparking some controversy. Despite the controversy, the 19 municipalities of Milwaukee County processed 100 percent of their ballots by the early morning hours of Nov. 4.

Wayne County, Mich., Michigan’s largest county representing 18 percent of the voting population from 43 communities including the city of Detroit, took center stage in Election 2020. County officials and election workers worked tirelessly to count all of the votes among rising tension, including protests at the voting count center in downtown Detroit. On Wednesday, Michigan was called for former Vice President Biden. Michigan hit records voting highs of over 5.2 million ballots cast and 3.3 million absentee ballots casts. Wayne County processed over 867,000 ballots, with huge portions coming from absentee ballots, over 555,000. Despite the significant increase in absentee ballots, Wayne County completed its count by the early morning on Thursday. The Wayne County Board of Canvassers is now beginning the process of examining and confirming ballot and voter totals which must be complete and sent to the Secretary of State by Nov. 17. These results will be unaffected by President Trump’s state-wide lawsuit, which was filed in Michigan's Court of Claims, to stop the counts “until meaningful access has been granted" to observe the process. The suit was dismissed on Thursday afternoon because the count has been completed.

NACo thanks the county election workers who have been working diligently in support of our nation’s democracy.