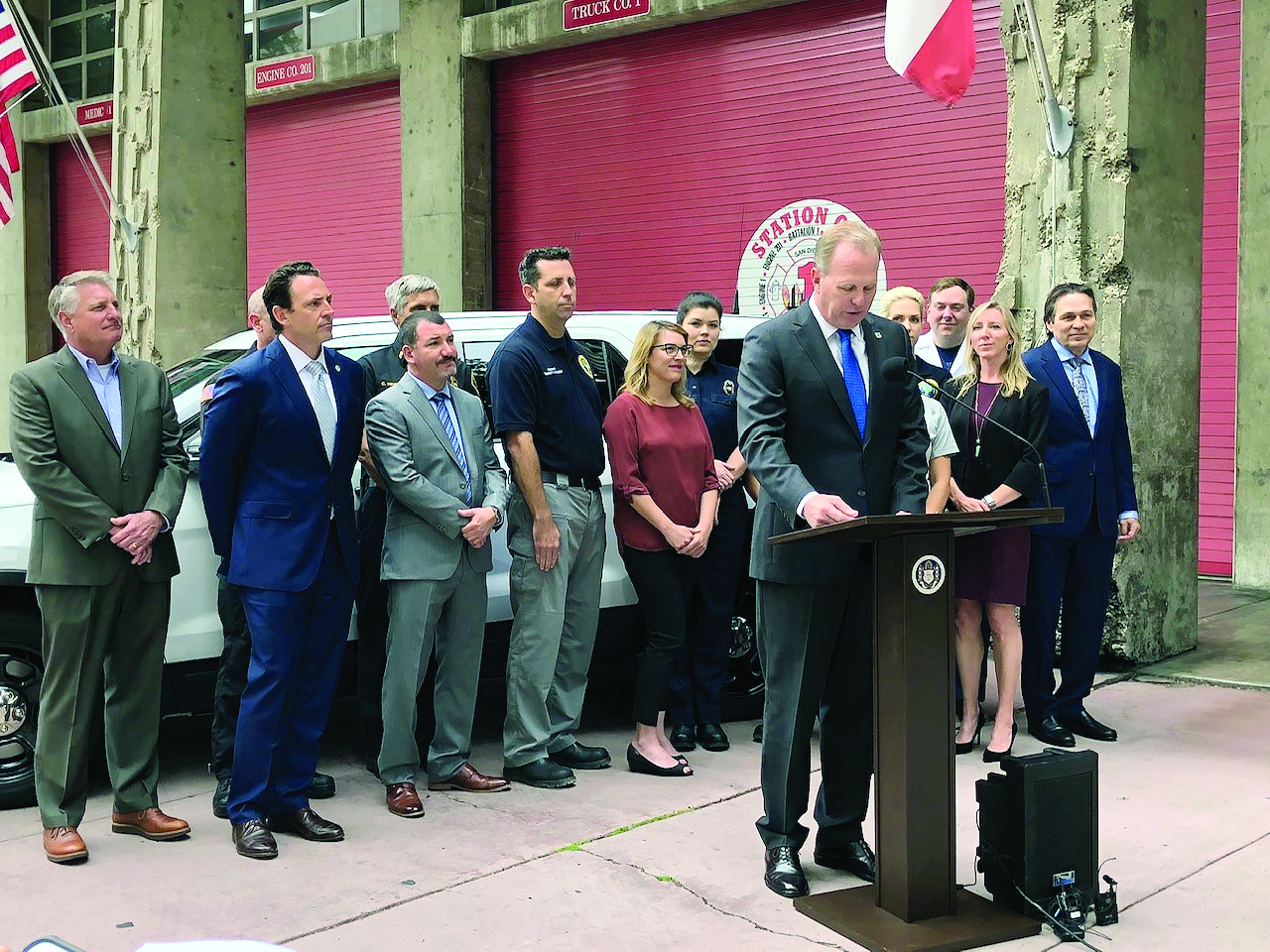 CALIFORNIA
The city of San Diego partnered with SAN DIEGO COUNTY to revamp a program that reduces the number of frequent 911 callers, NBC 7 San Diego reported. The Resource Access Program is a mental health initiative that tracks frequent 911 callers and connects them to long-term care by using data to measure a caller’s vulnerability. San Diego Mayor Kevin Faulconer, at the microphone, speaks on the topic, surrounded by city and county officials. Frequent callers often suffer from chronic homelessness, mental illness, substance abuse disorders and other medical conditions, he noted.

SANTA CLARA COUNTY launched a “Weed Hazard” app that aims to reduce fires in areas that are overgrown with weeds. The app allows users to anonymously photograph and report areas where property owners are not maintaining overgrown weeds, KPIX 5 CBS San Francisco reported. The purpose of the app is to prevent wildfires from spreading to residential areas. Property owners who are told by the county to remove weeds could face up to $1,400 in fees.

MANATEE COUNTY’s “Working Cat Program” is helping feral cats throughout the county. When Manatee County Animal Services finds that a stray cat is unadoptable, they place the cat in the program after it is spayed or neutered, Fox 13 reported. The cats are placed near farms, factories, churches and homes to help control rodents. The county is working to find more areas to place the “working” cats.

News from Across the Nation is compiled by Charlie Ban and Rachel Looker. If you have an item for News From, please email cban@naco.org or rlooker@naco.org.

A PINELLAS COUNTY program is educating parents about safe sleeping for infants. The “Beds 4 Babies” program works to eliminate accidental infant sleeping deaths by providing pack ‘n plays, fitted sheets, a sleep sack, a quilt and other supplies to county residents who need a safe place for their child to sleep, WFLA-TV reported. In 2017, 10 infants died in Pinellas County from unsafe sleeping. The program partners with hospitals and pregnancy centers throughout the county.

A new website in HAWAI’I COUNTY is providing residents with up-to-date information after the 2018 Kilauea Volcano eruption, Hawai’i Public Radio reported. The platform allows community members to comment on resources and view information about planning and implementing recovery steps. The website features a recovery-related calendar and multimedia stories from the eruption as well as housing recovery resources and information on lava hazards.

A tick and mosquito surveillance program in WASHTENAW COUNTY is using data to track and prepare for diseases, MLive reported. The Washtenaw County Health Department will add tick and mosquito data to a statewide system that is used to help identify virus-transmitting mosquitoes and ticks. Seventeen residents were diagnosed with Lyme disease in 2018. To help stop the spread of diseases, the county will set up mosquito traps and “tick drags” throughout the county.

An extra patrol program in CHRISTIAN COUNTY is helping protect homeowners when they vacation during the summer. Residents can sign up for the program and list the dates they will be away from their homes with the Christian County Sheriff’s Office, KY3 reported. Deputies are randomly dispatched to these addresses where they physically walk around and inspect the premises. The program is open to anyone who feels they may need extra patrols for their home.

FLATHEAD COUNTY is using a drone to help control mosquitoes. The drone surveys land for mosquito larvae in different bodies of standing water, KPAX reported. If the drone detects mosquito larvae, the area is sprayed with a pesticide that is safe for people and the environment.

Nevada Day will celebrate the state’s 17 counties this year, a theme the occasion has not drawn upon since 1957. The holiday, celebrated Oct. 31, commemorates the Silver State’s admission to the union in 1864. Organizers have asked each county to submit a page for the Nevada Day Program detailing what is significant about their county, CarsonNow.org reported. The year coincides with PERSHING COUNTY’s centennial.

Ranking first out of 100 counties for human trafficking charges in 2018, CUMBERLAND COUNTY is starting a specialized human trafficking court to handle those charges. The County Board of Commissioners is contributing $241,000 to start the court. Dubbed “Worth Court,” its name stands for “We Overcome Recidivism Through Healing,” the Associated Press reported.

A typo in a ballot measure will cost COLUMBIA COUNTY’s emergency response system millions in funding. The Columbia 9-1-1 Communications District won 74 percent approval for the measure to fund the system with a levy, but rather than asking for 29 cents per $1,000 of assessed property value, the question on the ballot asked for 0.29 cents per $1,000, 1/1,000th of what was intended. The Oregonian reported that the district estimated collecting $7.92 million over five years. As approved, it will bring in $79,200. The district plans to ask a judge to allow the district to tax voters at the higher rate, matching what was intended and had been the existing levy rate. If a judge doesn’t side with the district, a reserve fund will keep its approximately 15 dispatchers answering emergency calls around the clock.

The DESCHUTES COUNTY’s district attorney announced that his office will stop prosecuting some misdemeanor offenses to focus on prosecuting serious crimes.  The county had more murder prosecutions pending than at any other time in its history and DA John Hummel told Oregon Public Broadcasting that the shift will make his office more effective. His office handles all cases, including minor misdemeanor offenses. Many of those offenses, like theft, trespassing and littering, will be handled through an early disposition program.

The Environmental Protection Agency has signed a final rule that will no longer require seven counties around Pittsburgh to use a more expensive “summer gas” blend. The previous rules controlled gasoline volatility during the summer months in an effort to reduce pollution, KDKA News reported.

KING COUNTY plans to buy or preserve 5,000 acres of forest, farmland, trails and urban green space by the end of 2020. That will mean spending $64 million on 61 individual projects, according to Executive Dow Constantine. Some of the projects will involve the county actually buying the land, while in some other cases, the county will buy easements that will forever prohibit development, preserving the land as open space. The purchases require the approval of the Metropolitan King County Council, The Seattle Times reported, but the council already approved the framework of the plan to expand the county’s protection of public space.