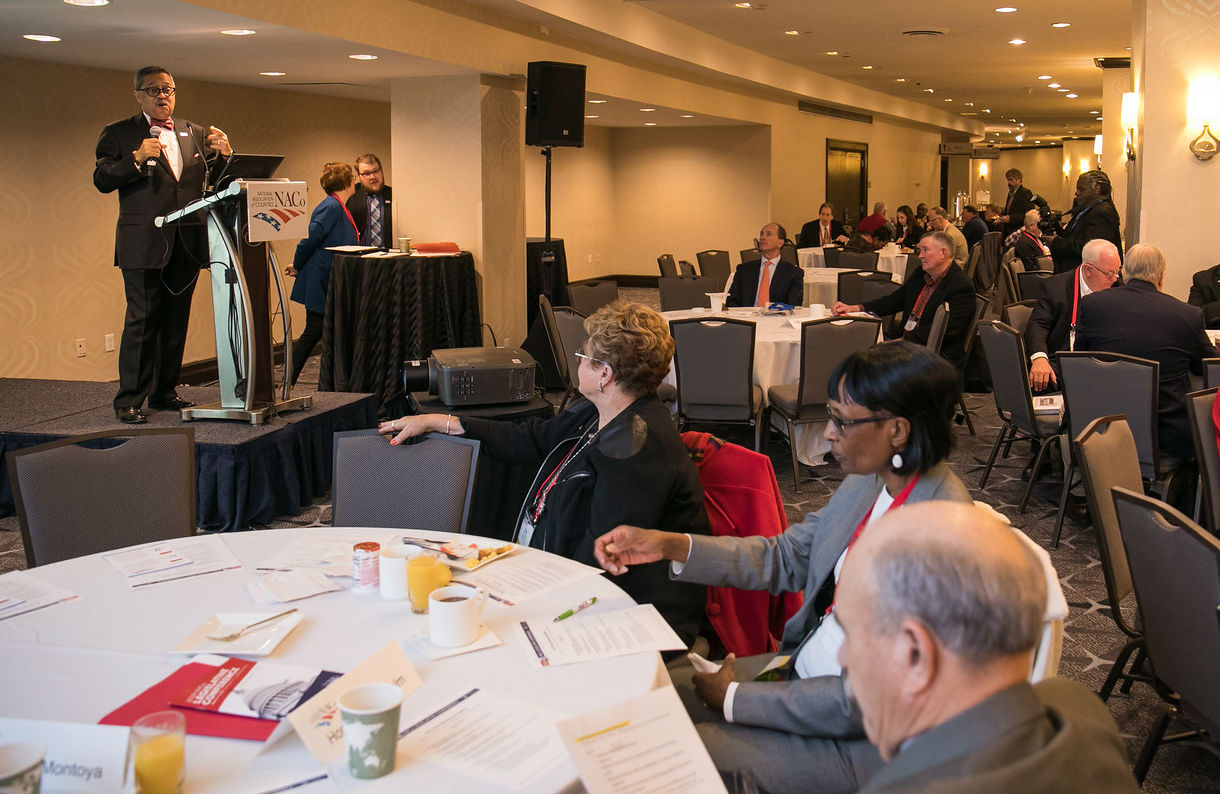 America’s infrastructure, multigenerational poverty, the opioid crisis and public lands issues are some of the important topics that county officials are tackling as they gather at NACo’s 2018 Legislative Conference in Washington, D.C., March 3–7.

Today, the kick-off day for the conference, belongs mostly to the policy process. NACo’s 10 policy steering committees meet to deliberate on proposals for new policy positions and to hear from federal officials about the programs and policies that impact counties.

Following are highlights from the day’s activity.

“It will be public who wins what,” Janson said in response to a question about who will receive the funds and how they will be used.

The auction will make up to $4.53 billion in support available over 10 years to rural areas that lack unsubsidized 4G service, he said. The auction is important to supporting mobile voice and broadband coverage, incentivizing the deployment of mobile wireless service through a reverse auction and ensuring that 4G service is preserved and advanced in those areas of the country that lack unsubsidized service.

The window for submitting a challenge opens March 29 and will remain open until Aug. 27, he said. The initial eligible areas map is available here. For information on the challenge process, click here.

Members expressed frustrations at  their meeting over the continued inability for first responders to communicate in rural areas, inside buildings and between responders.

“The next five years we’re building out more and more, including pushing out into rural areas,” Justin Shore, counsel, Office of Government Affairs, First Responder Network Authority (FirstNet) told members during a panel discussion. “It’s a 25-year contract that FirstNet has established with AT&T.”

The First Responder Network Authority of the United States was created under the Middle Class Tax Relief and Job Creation Act of 2012 as an independent authority within the National Telecommunications and Information Administration.

“Now that I know about FirstNet, I’m going to be watching to see how services improve in our area,” Morgan said.

5G discussion: ‘We want to be at the table’

Discussion between county officials and telecom companies about 5G isn’t impossible. “How do we have that discussion that is challenging and moves to collaboration?” said Rebecca Hunter, government and external affairs manager for Crown Castle. “This is infrastructure…water, sewer, your roadways. This has to be considered. We use the word ‘densification.’ The capacity of all that data usage does require that densification. We hear from customers that they’re not satisfied with service.”

Hunter made her remarks Saturday morning in a panel discussion at NACo’s Telecommunications and Technology Policy Steering Committee meeting.

“We want to see this happen but we want to be at the table,” said Deb Socia, executive director, Next Century Cities.

“What we’re seeing around the country is this false narrative from telecom companies: ‘Give us access at reduced prices and we will build out to rural areas,’” said Gerry Lederer, partner, Best, Best & Krieger.

“Don’t buy into the narrative that local government is the barrier to broadband deployment — it just doesn’t ring true,” Lederer said.

The FCC will move at its March 22 meeting to get rid of National Environmental Policy Act and National Historic Preservation Act reviews when locating equipment necessary to deploy 5G.

Local control over 5G is also taking root in state legislatures. In all, 14 states have passed small-cell legislation, Lederer said.

The Department of Interior has adjusted its reorganization plans based on state and local feedback.

James Cason (pictured above), associate deputy secretary, said the department took county commissioners’ and governors’ feedback to heart after proposing new regions for the department’s 12 agencies, based on established watersheds. The latest map blends the watershed approach with an attempt to retain state jurisdictional lines, which state and local officials preferred.

Guiding the reorganization is Secretary Ryan Zinke’s hope to overlay as many land-management functions as possible, to encourage cooperation and mutual understanding.

“It’s hard to get them to work together because they’re all different structures,” Cason said.

“We want to make sure that our entire Interior team that operates in those states know they have to work together to address on-the-ground conflicts and things that cross their jurisdictions.”

That may involve co-locating staff from different agencies.

For example, having Environmental Protection Agency staff familiar with Bureau of Land Management staff and their work. The Department of Agriculture’s Forest Service and the Army Corps of Engineers are also candidates for office co-location.

“(The EPA) has no land to manage, but they have a major impact on how land is managed,” Cason said. “They seem to be disconnected from the actual impacts they create on the ground.

“If we can have our staff rub elbows with each other to say ‘do you have any idea what kind of impact your idea here is going to cause on our federal land management? And then, oh, by the way, if you’re creating that impact on us, here’s the impact you create on everybody else who owns private sector land.”

It was standing room only at Saturday’s luncheon discussion on combating two-generation poverty. The word of the hour? “Innovation.” That’s what panel members said is needed to break down long-held ways of dealing with poverty.

Panel discussion member Arapahoe County, Colo. Commissioner Nancy Sharpe noted that her county has 17,000 children who live in poverty out of a population of 640,000. “What we really started focusing on was innovation,” she said.

“We were really seeing the silos we had working with children and their parents,” she said. “Sometimes we don’t see what each is doing. We think about how the programs bring families together.” Sharpe noted that silos exist across the board locally, statewide and on the federal level. “How do we bring siloed agencies to all work together?”

Sharpe also said that her county is “all about collecting data. Are we really achieving our goals?”

“What truly will change this is innovation,” said Weber County, Utah Commissioner James Ebert (pictured right), adding that his county had found “alarming” numbers of children in poverty in his county, with 24 percent at risk of living in poverty as they got older.

Collaboration was another key word at Saturday’s luncheon. Ebert said bringing community leaders and policy makers together is important when trying to stamp out poverty in your county.

The opportunity zones provision, Investing in Opportunity Act, intends to draw private capital back into distressed communities by providing tax advantages to investors.

To make sure the ZIP codes most in need are the ones that reap the benefits of this new provision, all 50 governors will designate “Opportunity Zones,” meaning governors and local leaders will have the opportunity to identify key qualifying locations that stand to gain the most from this initiative, Hawkins said.

Hawkins told county officials Saturday to weigh in with their governors on where those zones should be designated.

Also at Saturday’s meeting, a Senate staff member said that Housing and Urban Development (HUD) is “not important” to the Trump administration. Responding to a question from a NACo member, Jason Woolwine, professional staff member, Majority, Senate Transportation, Housing and Urban Development Appropriations Subcommittee, pointed to the administration’s reduced funding when he made his remarks. “You’re giving us too much credit for having active and fruitful conversations” with the Trump administration, he said.

“We’ve lost over 25 percent of CDBG” over the years, said Ramsey County, Minn. Commissioner Jim McDonough, a vice chair of the steering committee. “How do we get back to a higher level of investment?”

“Where that conversation begins is with the Budget Committee,” Woolwine said. “They decide how much the government can spend.”

Drones came to the rescue in wake of hurricane season

Though Unmanned Aircraft Systems, or drones, can be a nuisance and a safety concern, they proved invaluable during the 2017 hurricane season.

“All of these efforts helped people in communities and counties get back on their feet after disaster strikes,” said said Erick Amend (pictured above), manager of the FAA’s Unmanned Aircraft Systems (UAS) Integration Office. “The FAA definitely wants to enable state county and city governments to facilitate the recovery process by using drones in the aftermath of such events.”

Those benefits come with challenges for counties, though. While the FAA is in charge of everything from the ground up, counties and states determine where aircraft take off and land. For drones, every surface is an airport. And these days, anyone who owns one of the more than 1 million registered civilian drones is a pilot.

“They’re now more portable than ever,” Amend said. “The technological advancements have made them so easy to fly that even somebody with no prior aviation experience can get a drone, take it out of the box, charge it up and start flying with no formal training or education.

“They’re learning on the fly, just like a video game.”

He touted the UAS Integration Pilot Program, which will pair state, local and tribal governments with leaders in the drone industry to help shape federal drone policy. The first 10 participants will be announced in May.

Amend also explained the Part 107 drone-specific pilot’s license that allows for low-risk drone operations, without having to reach the same level of skill as a pilot who operated a manned flight.

“We’re not only integrating a new kind of aircraft into our airspace, were integrating change into our society,” he said, “but wholesale change takes time, it can be disruptive.”